After a clean sweep by the Reds, the Diamondbacks were looking to put the past behind them and move back to the NL West, where.... oh, that's right, they are 12-30 against fellow division opponents. Their record against the Rockies is better than any other NL west foe, only 4 and 5 against.

For the first 8 innings, it looked like that record would drop to 4 and 6 and we might keep pace with the Orioles, who lost. But a solid performance by the bullpen and a 9th inning meltdown by the other team gave the Diamondbacks a spark to win it in extra innings.

Ian Kennedy was on the hill for the Diamondbacks, trying to repeat his outstanding performance from last week in Washington. But he struggled early on, allowing baserunners in each of his five innings of work (the leadoff man reached base four out of five times). He was lucky to get out of the first two innings, having four baseunners without allowing a run, but the Rockies got on the board in the 3rd inning. After Dexter Fowler singled to lead it off, Seth Smith doubled to the triangular corner behind Justin Upton in right field. Fowler only went to third then, but Troy Tulowitzki tripled sacrificed him in. Ian Stewart and Chris Ianetta both reached to load the bases, but Clint Barmes popped out to limit the damage to one run.

The Rockies added two more runs in the 4th. Eric Young Jr singled, then went to third on a poor throw-over from Kennedy. Fowler doubled to score Young, and Tulowitzki tripled doubled to score Fowler. The Rockies' 3-0 lead honestly felt like 5-0 at this point with all the baserunners that had reached - the Rockies stranded 9 men in the first 5 innings, and Kennedy was out after 95 pitches in the 5th.

Meanwhile, the Diamondbacks' offense was having absolutely no affect on reliever-turned-starter Esmil Rogers. Justin Upton led off the 4th inning with a single and later scored on Adam LaRoche's 78th RBI of the season, but that was the only threat in the first 8 innings. Thankfully, Arizona's A-bullpen relief core of Blaine Boyer, Sam Demel, and Esmerling Vasquez had kept it a 2-run game, which for once gave the Diamondbacks a chance to come back in the 9th inning. It was RALLYCAPS time! Against Colorado closer Huston Street, Kelly Johnson and Chris Young singled and walked, respectively. But after LaRoche and Mark Reynolds both struck out, and Miguel Montero with a two-strike count, hope was quickly dwindling. But Miggy fouled off a few pitches up and in, then drilled one that was inches fair down the right field line to tie up the game at 3-all and send us to extra innings.

Aaron Heilman made quick work of the Rockies in the top of the 10th, helped out by a strike 'em out, throw 'em out double play. In Arizona's half of the frame, with one out, Upton singled and Johnson doubled to the wall in left-center field to knock in Upton, who was running as fast as I'd ever seen him run to score from first base. The Diamondbacks pulled off a come-from-behind victory for their 5th walkoff and remain perfect on Gonzo bobblehead nights. 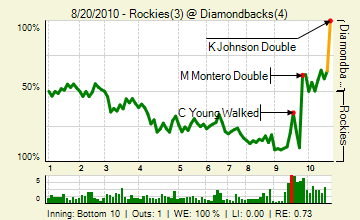 We were initially on pace to be one of the quietest gameday threads of the year, but we ended up over 700 posts, which was quite enjoyable in the end, RALLYCAPS and all. justin led the way, hotclaws hot on his heels, and Jack was almost at triple digits. All present were soco, mrssoco, justin1985, unnamedDBacksfan, 4 Corners Fan, Jdub220, snakecharmer, Dallas D'Back Fan, Rockkstarr12, IHateSouthBend (WELCOME BACK), jonny-yuma, hotclaws, GuruB, BattleMoses, Azreous, morineko, Jack Cromwell, Wailord, brian custer (strangely quiet after Heilman went into the game...), DbacksSkins, emilylovesthedbacks, and marionette.

Comment of the Day goes to the one green comment there was when I ran roll call, and which cracked me up for a good 3 minutes. In response to a post by Jack, Wailord said...

Dude
there's something seriously wrong going on with that vuvuzela.

But, Rockstarr's poem about Miggy was also green when I went back later, so she gets honorable mention!

The Diamondbacks actually had fans for this game, reported to be over 26,000 there tonight. Hope to see more tomorrow evening for Barry Enright vs Ubaldo Jimenez.