Share All sharing options for: Diamondbacks 5, Reds 9: Arizona Completely Unable to Get Wood.

The Diamondbacks dropped their sixth game in the last seventh, putting up perhaps the most feeble resistance of the series as the Reds swept majestically out of town, having scored 27 runs over the three-game set. Travis Wood allowed one run, pitching into the seventh inning, and any hope of a comeback were extinguished, after a Little League error in left-field by Rusty Ryal. That opened the door for Cincinnati to score five unearned runs, and though the offense finally showed up afterward, it was too late. The metaphorical horse had not only left the stable, it had also competed in several seasons of racing and retired to an enjoyable life at stud.

Oh, look: we're back on pace to lose a hundred games. Details after the jump.

In the end, it was the eighth that probably cost the Diamondbacks this one. D.J. Carrasco came in, and looked to be on his way to a comfortable 1-2-3 inning when the third batter lined one softly to left-field. Ryal, coming in caught it...then dropped it. There's not really any other way to describe the way it went in and out of his glove - but, not for the first time, one wonders whether asking someone with less than 20 outfield starts in his professional career to play there, might have been asking for trouble - a function of Gerardo Parra's perceived inability to deal with left-handed pitchers, probably.

Still, that was only responsible for a man on first with two outs. The fact that it took five more batters before the Diamondbacks could get the final out - with five runs crossing the plate in the meantime... Well, that's pretty much all on Carraso and Jordan Norberto: in particular, the pair of four-pitch walks issued by the former, which helped set the stage for the RBI single, two-run single and two-run double that ensued before the pesky third out was finally recorded. On the plus side, all five runs were unearned, so the bullpen pitched three innings with no damage to their ERA tonight. So that's nice.

That made the score 9-1 to Cincinnati in the middle of the eighth, and all those extra batters and runs didn't technically have much impact on our Win Probability - it was 9.4% before the error, and ended the inning at 0.3%. However, one wonders what might have been, since Arizona then scored four runs in the bottom of the eighth. Justin Upton singled home a run, and Chris Young then uncorked his 22nd homer of the year, a three-run shot. Of course, while it's probable the Reds would not have been using their B-Bullpen with a narrower lead... Still a pretty galling experience. A lead-off walk in the ninth was followed by three outs to end the series.

The Reds also took the battle of starters, with Travis Wood allowing three hits and a walk to the D-backs through the first six innings, and it took him just 64 pitches to get through those. He was pulled in the seventh after only 79 - we should probably mark thus date in our calendar, as the sole recorded occasion in history when Dusty Baker had a quick hook with a young pitcher. One of those hits was by Mark Reynolds, who deposited the 27th home-run of the year into the bleachers: cue mindless ranting on azcentral.com about how meaningless that was, and how we should get rid of him. Meanwhile fangraphs.com values Reynolds' contribution at over $10m this season...

The sixth and seventh innings saw Arizona do what we seem to have been doing a lot of lately - stranding leadoff doubles, in the shape of Augie Ojeda and Young respectively. In both cases, the runner was left at third: Upton was a culprit in the former inning, and the boo-birds were out for him as he collected his third strike-out of the night. Young had two hits, Stephen Drew and Reynolds each collected a hit and a walk. At least the crowd was up a bit, at 17,385. But it was another game to forget for those in attendance, and all positive energy gained from the way we opened the month has now evaporated.

Joe Saunders was more or less excellent - providing you closed your eyes for the two batters in the fourth innings, who went yard back-to-back off the Colonel, accounting for all four Reds runs which he allowed. Truth be told, he was probably rather lucky to avoid giving up more, as in the six innings of work, he gave up eight hits, walked three batters and uncorked a wild pitch. Following Saunders, Blaine Boyer and Juan Gutierrez pitched perfect innings for the seventh and ninth respectively: the eighth has already been discussed to death above, and I trust I need not remind you of our failings there.

According to the pre-game notes on SB Nation Arizona, the line-up board in the clubhouse carried the additional message, "Run on and off the field." I do see and appreciate what he is trying to do, but it's also very easy to mock that kind of thing, as applying a band-aid on a chainsaw wound. Certainly, no amount of sprinting to and from the dugout could conceal the gulf between us and the Reds, something Cap'n Kirk acknowledged: "You can look right over there and see how far we've got to go. They weren't very good last year but they're darn good this year, so sometimes it seems like we're far away - we're really not." We'll see. 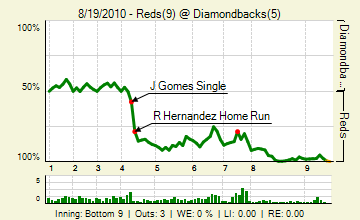 629 comments, with DbacksSkins and Jack Cromwell reaching a hundred, and Rockkstarr12 some way behind in third place. Also present: soco, blank_38, Azreous, BattleMoses, emilylovesthedbacks, Jim McLennan, hotclaws, 4 Corners Fan, snakecharmer, kishi, justin1985, BigPapaKishi, Wailord, Torpedosneak and unnamedDBacksfan. Comment of the Night goes to Rockkstarr12 for the one below. She used the same GIF that got wailord an official warning, when used under rather different circumsances - proving again, that context is everything!

Not liking this game one bit...

Hard to argue with that sentiment tonight. Next into town are the Colorado Rockies, who are desperately trying to cling on in the wild-card race, and just dropped two of three to Los Angeles, scoring three runs in the process. Here's to kicking them when they're down.