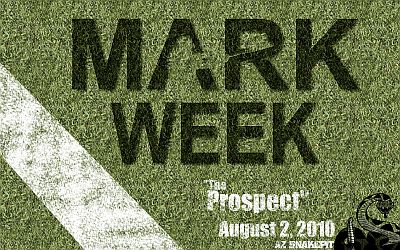 Today I’ll be looking at Mark Reynolds the prospect, and I’ll try to ask some important questions. Where did the power come from? Was it always there? Did anything suggest that he’d have such problems striking out? After the jump, we'll take a look at his minor league numbers and see what kind of prospect he was.

Mark Reynolds was drafted in the 16th round of the 2004 Draft, and I have a feeling expectations weren’t that high for him. Across three levels in his debut season, Reynolds hit 253/348/475 with 20 doubles, a triple, and 12 HRS. He had a 26:74 BB:K ratio. A solid debut, with the K:BB ratio being the only real concern. If I had to give him a John Sickels-esque grade, I'd give him a C+.

In 2006, Mark split time between Hi-A and AA and hit 318/401/603 with 25 doubles, 2 triples, 31 homers, and a 109:52 K:BB ratio. Excellent power (the most HRS hit by a Dback minor leaguer until Paul Goldschmidt this year), but the strikeouts were definitely a concern at this point, even though he had a slight bump in walk rate. Without the strikeouts, i'd give him a B grade, but with the strikeouts, he'd get a B-