Like the last time I did a recap, the Diamondbacks played in front of a franchise-worst crowd in Wednesday's game. Through seven innings, they were treated to a sterling display of baseball -- strong offense, good enough pitching, and they even had free tacos locked up by then. Unfortunately, though, baseball continues to employ a pesky system where they expect teams to play nine innings, and that cost Arizona dearly tonight.

More after the jump...

Rodrigo Lopez wasn't at his best tonight. He limped through five innings, scattering eight hits en route to giving up three runs, two of them on solo shots by Jim Edmonds and Jay Bruce. Still, as it turned out, he left in line for the win, thanks to a timely pinch hit performance and some backup from pretty much the whole D-backs lineup.

Arizona plated one run in the second, but wasted a chance to get much more. Edinson Volquez seemed to lose his command of the strike zone briefly, walking both LaRoche and Reynolds to start the frame. Consecutive groundouts moved the runners over and scored one, but also effectively killed off the threat.

Trailing 3-1, the Diamondbacks stormed back in the fifth. After Parra grounded out, Ryan Church (hitting for Lopez) slapped a base hit to left and moved up on an error. Smart baserunning by Stephen Drew on a base hit of his own allowed him to sneak into second, putting two on for Justin Upton, who was mired in an 0-18 rut. Upton put a decent swing on a pitch to line it up the middle, and both runs scored to tie things up. To top it off, Chris Young launched a bomb to left to score Upton, and out of nowhere, Arizona had a two-run lead.

Adam LaRoche continued his hot hitting with a two-run shot in the seventh for some insurance runs. He looked agitated by the home plate umpire's call on a first-pitch strike, and on the next pitch lined a frozen rope into the stands in right for his 21st on the year. So heading into the eighth, the Diamondbacks held a 7-3 lead and things appeared to be in good shape.

After a 1-2-3 seventh, Sam Demel was sent back out for the eighth. He picked up where he left off by striking out Scott Rolen, but everything went to hell from that point on. After a stretch of single-triple-double-single, a four-run lead was cut in half, and there were still runners on the corners with one out. Insert Aaron Heilman on a double switch, a five-out save attempt for our "closer." Unfortunately, he didn't get any of those five before blowing the save, as a sac fly and a ground rule double tagged Demel with all four runs in the inning.

Despite the disappointing results, this was still a tie game, although it didn't feel like one. All the Kirk Gibson accountability in the world couldn't account for what happened next: a meek bottom of the eighth (Parra reaching on a one-out hit the only blip on an otherwise motionless heart monitor), followed by Heilman collapsing and coughing up four runs of his own, without help from anyone else. The most damaging blow was a squeeze play with one out and Edmonds on third -- the runner scored and Heisey was able to reach first as well. Once the go-ahead run was in, the wind seemed to be completely taken out of Heilman's sails, and a single, HBP, sac fly and double later, he was gone. Gutierrez got the final out, but it didn't matter. In the span of four outs, a four-run lead became a four-run deficit, and the 2010 Arizona Diamondbacks had once again stunned us all. Three quick outs in the bottom of the ninth and that was that. 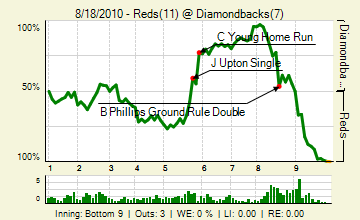 Do not adjust your computer screens -- that is indeed a 97.4% win expectancy with one out in the eighth. And then some things happened. Fangraphs recognizes that the fault for the majority of those "things" belongs to Heilman, as seen by his disastrous percentage.

Let's just say my choice for Comment of the Night (with 5 recs) couldn't be as unfortunate as all that.