Diamondbacks 2, Reds 6: Out of my mind. Back in five minutes.

Share All sharing options for: Diamondbacks 2, Reds 6: Out of my mind. Back in five minutes.

Edgar Allen Poe once said, "I have been happy, tho' in a dream." He also went on record to say, "The D-backs, even I hath not requiem such despair." Doesn't make sense, does it? Oh well.

The D-backs took the lead early thanks to the bats of Chris Young and Kelly Johnson. After a leadoff double and home run respectively, a 2-0 lead was established that would not change for much of the game. Meanwhile, Dan Hudson continued to be really, really good at baseball. Despite allowing leadoff hitters to reach in the first, second, and fourth innings (along with a HBP of Brandon Phillips in the third) Hudson mowed down the lineup, striking out eight of the first nine outs. Things were looking good.

Bronson Arroyo, however, put up similar numbers and held the fort as the Diamondbacks struggled to get much going after the first inning. They had something cooking in the fourth and fifth with runners reaching 1st and 2nd on both occasions, but the boys couldn't seal the deal. Things were still looking good but gloom seemed apparent.

With the offense sputtering it was up to Hudson to keep things intact. It looked bleak at first, as the leadoff batter reached for the fourth time to start the fifth inning. Then Paul Janish hit a double right down the left field line and Drew Stubbs, on a hit and run, reached home plate with ease. Then something weird happened. Remember how it seems that all these weird things keep happening to us this season? Well, this time it happened to Stubbs and the Reds. An appeal was called and Stubbs was called out at third base. The replay proved the he missed the bag, albeit by the slimmest of something that's slim. The run was scratched and Hudson got a popout and another strikeout to end the remaining threat. Faux gloom - things still looked good.

Some of the luck ran out in the next inning though, and the Reds finally broke through. After another leadoff hit, the Reds scratched and clawed for that first run. A GIDP by Jay Bruce helped some but another run was tacked on to tie the game on the play. It looked like LaRoche had a chance to cut off the run at the plate but he opted for the double play instead. Things are starting to go sour.

Unfortunately, a lot of the same happened over the remaining span of the game. Paul Janish redeemed himself from his earlier mistake and planted a pitch into the left field bleachers to give the Reds the lead. Hudson finished the inning and wound up with the line of 7 IP, 9 H, 3 ER, 0 BB, and 10 K. Definitely a solid outing but the leadoff hits were an issue, especially against a playoff caliber team like Cincinnati. Meanwhile, the D-backs continued to struggle offensively. I have a bad feeling now.

Things got awfully nerve-racking in the top of the eighth as the Reds loaded the bases. Blaine Boyer would have none of it though, and wiped out the threat. The D-backs knocked on the door in the bottom of the frame with a leadoff double by hard-hittin' KJ but it was equally as unproductive. Fingers crossed, maybe something will happen.

Then things spiraled out of control in the ninth. Blaine Boyer came back out to the tune of an error (by Mark Reynolds) and a HBP. He was replaced by D.J. Carrasco but there must have been something in the air because the results were the same - another HBP and a wild pitch which allowed a runner to score. Scott Rolen had a two-run single to cap off the inning before Jay Bruce grounded into his third double play of the game. The broadcast team probably jinxed us, bragging about how good the bullpen had been leading up to that point. The D-backs went down in order to finish the game, and that was that. 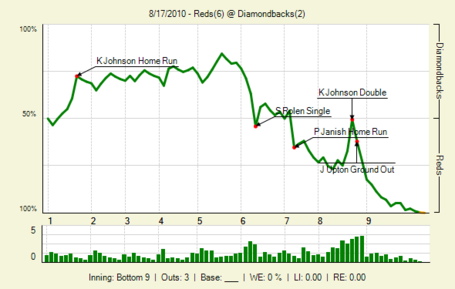 Our savior: Kelly Johnson, 28.3% a.k.a. the only player in double digits
The baseball equivalent of [insert bad thing]: The offense, -38.1%

A rough day for everyone not named Kelly Johnson to say the least...

We ended the night with a strong GDT performance with over 800 comments spanning 23 people. soco and DbacksSkins were the only ones to crack triple digits, and soco juuuust squeaked out with the win by five posts. The bronze medal went to kishi. Others included: ZonaBacks10, hotclaws, piratedan7, NASCARbernet, Rockkstarr12, snakecharmer, Wailord, Jdub220, Bryan J. Boltik, txzona, Turambar, 4 Corners Fan, tehzachatak, Muu, MidnghtDrgn, Zephon, BattleMoses, brian custer, ChrisHansen, and myself.

Comment of the night is awarded to Wailord for his clever followup to this question...

hotclaws wonders, What is up with Ustin lately?

Ever since he decided to drop the J

he just hasn’t been the same.

Tomorrow we'll see Rodrigo "The Green Lantern" Lopez (5-11, 4.93 ERA) pitted against Edinson "Woah Look At That Nose!" Volquez (3-1, 4.25 ERA). Volquez is riding some momentum and has a 1.53 ERA in his last three starts while Lopez is... Lopez. Hopefully the D-backs can pull it off and break even to tie the series.