Facing Stephen Strasburg has almost become a right of passage. The Golden Child can do wrong, or so ESPN would tell you. But how would he fare, when he faced the Diamondbacks own Pitching King, Barry Enright? Would the Strasburgs overcome, or would it be the Enrights?

Things didn’t looks so well for the Strasburgs at the beginning. It took only to the second inning for the Enrights to draw blood, with Enright hitting a solo home run to lead things off. Then Strasburg made things difficult for himself by airmailing a throw to first, allowing Enright to score from first, and the batting Enright to advance to third. A sacrifice fly by Enright would bring the score to 3-0, and things looked good for the Diamondbacks.

The Nationals wasted no time striking back, though. In the bottom 2nd, Strasburg led things off with a double, and was promptly brought home with a wicked grounder by Strasburg past the outstretched glove of Enright. Strasburg wasn’t done with his offensive prowess, and he smacked a two run homer in the bottom of the 4th, scoring himself and Strasburg.

After this, Strasburg and Enright mostly settled down. Both would be knocked out in the 5th, though their lines were slightly different. Only one of the runs were credited on Strasburg, though he really was responsible for all three after his error. Strasburg also had 7 strikeouts on the D’backs, while Enright only managed 1. Luckily, games are not won on strikeouts alone.

After the 5th, something strange happened: as Strasburg and Enright were pulled, they were replaced by your normal Nationals and Diamondbacks. Neither team faired much better in the sixth, but in the Nats were able to break through in the bottom of the 7th. Adam Kennedy came scampering in on a Ian Desmond grounder between first and second. Although Adam Dunn would fly out to deep right to end the inning, the Nats still had taken control with a 4-3 lead.

Zimmerman would increase the lead with a solo home run of his own to start the bottom of the 8th. He pasted it into the left field bleachers, and he knew it. That would be all they would need to finish off the D’backs this Sunday afternoon, and to take the series.

And the Diamondbacks offense? Well, outside of the 2nd inning, the less said the better. 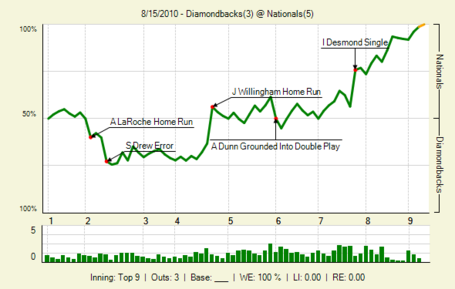 A fairly energetic GDT today.  See, Strasburg is good for baseball!  I led the way in comments, closely followed by justin1985, and we were the only ones to break 100 at this time.  We were joined by: Clefo, blank_38, kishi, mrssoco, pygalgia, Rockkstarr12, Jim McLennan, Jdub220, hotclaws, Wailord, snakecharmer, Bryan J. Boltik, marionette, NASCARbernet, Muu, blue bulldog, emilylovesthedbacks, DbacksSkins, txzona, Skii, Torpedosneak, AJforAZ.

Comment of the Day?  More like Persona of the Day.  I award it to NASCARbernet, who found his voice as Medieval Historian, and didn't drop it throughout the game.  Good job!

Day off tomorrow to get ready for the Reds on Tuesday.  This series breaks our streak of winning (or at least not losing) series, so here's hoping we can get it back going against the NL Central leading Red Stockings.