Enright vs. Strasburg: Clash of the Titans

Share All sharing options for: Enright vs. Strasburg: Clash of the Titans 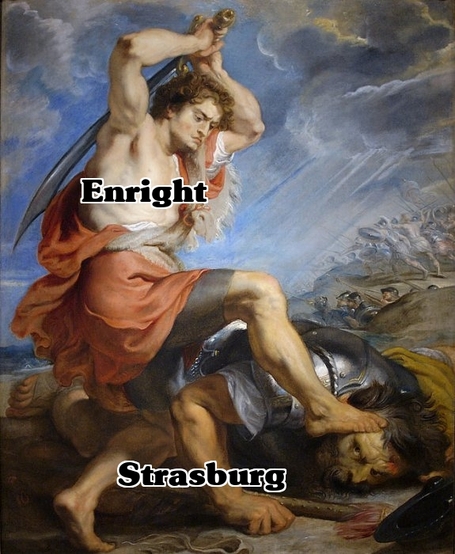 [With apologies to Peter Paul Rubens]

Sunday sees the greatest pitching smackdown since...well, since the last time La Strasburg pitched, according to ESPN, anyway. The Diamondbacks' Barry Enright - yet to allow more than three runs in any of his eight starts to daye - will be facing the Cy Young winner for 2010 through 2015 inclusive, Stephen Strasburg in Washington. The sabermetric view is that Enright doesn't have a chance, with all the made-up stats like xFIP "proving" the sheer dominance of Strasburg. However, Arizona fans - and anyone else who is sick of the overblown marketing hype around Strasburg - will be cheering for the little guy.

So ‘twas written that a Day in the Neare Future (Sunday, actuallie), that Barry The Red (he of Unequaled Braverie and Valor, who hath destroyed Evils ancient and moderne, bedeth unrivaled quantities of the Fairest of Maidens, and vanquished innumerable Gallons of Grog and Spirits both weak and vomit-inducing) ventured to the Capital of our Fair Countrie in hopes of conquering the False Messiah - He Who Hath Striken Out A Crap-Ton Of Batters, Sir Stephen Of Strasburgia.
-- The Gospel according to St. Justin.

THE TALE OF THE TAPE

The peripherals certainly do provide some food for thought: while Enright is able to keep pace with Strasburg in both BA and OBP, the hits he's allowed have gone for more bases. Barry's home-run rate of 1.13 per nine IP, is almost double that of La Strasburg (0.61). However, part of that is because Enright is a much more fly-ball oriented pitcher: His GB/FB ratio is 0.55, compared to SS's 0.75, and the major-league average of 0.80. Given that, Enright's home-run rate is about what you'd expect: 7.5% of fly-balls leave the park, while league average is 7.2%. There, Strasburg is down at 5.8%, so we'll be hoping for some regression there tomorrow.

There are two areas of particular concern for Enright: BA on Balls in Play, and Strand Rate. We've discussed BABIP before - it's a number over which a pitcher tends to have little control, and in time will tend to the league average, around .300. There, Enright is currently at .255, Strasburg at .331, so Enright has been "luckier" than his opponent. And, as Amit pointed out over at D'backs Venom last week, he has also been remarkably good at leaving runners on base, another dubious "skill" [though one the likes of Livan Hernandez seem to have mastered]. With league average around 72%, Enright's number of 88.7% is impressively unsustainable.

That said, games are not won or lost on the basis of fabricated metrics like xFIP, and the fact is, so far, Enright has been a better pitcher than Strasburg in the only area that truly matters a damn: stopping the opposition from scoring runs. He has also shown superior consistency and, from a health point of view, been more reliable. But when you search mlb.com for "strasburg", you get 38,700 hits, compared to only 4,180 for "enright." Similar numbers can be found on other sports news sites. Nothing against Strasburg, but on actual performance rather than hype, Enright deserves a lot more love.

I don't think anyone is seriously suggesting Enright is a better long-term bet than Strasburg. Put it this way: if Arizona were offered a straight swap of the two, say, I'm sure they'd accept, just as soon as they could find a way to free the Washington GM from his strait-jacket. But as long as Barry can continue to stave off the relentless force of statistical regression for one more outing, when the eyes of the entire nation (or, at least, the entire ESPN pundit nation) being upon him, we'll be happy with that. His next start will be against the Rockies, so he can fall apart there all he wants, and no-one will notice.

It could certainly be interesting. We have the team who has struck out most in the majors this year, going up against the starter with the highest K-rate. And it's not even close, in either category. Going into today's game, Arizona had 1,076 strikeouts, while the second-placed Marlins had only 930. Meanwhile, SS has fanned 12.12 per nine innings of work, with only two other starters even above ten (Brandon Morrow and, just, Jered Weaver). The cynic in me thinks the single-game K record is potentially under threat in this match-up - perhaps by the end of the Diamondbacks seventh inning...

Usually, Sunday morning east-coast games are a theoretical construct for me. I schedule the Gameday Thread the night before, but 10am Sunday is prime time for warm, pillowy goodness. Tomorrow, however, while I'll still be pre-scheduling the GDT, I think I just might make an exception and try to surface a little earlier, to see if David Enright can pull off the upset over Goliath Strasburg.