Diamondbacks 9, Nationals 2: Our Miggy is Better Than Their Miggy

Share All sharing options for: Diamondbacks 9, Nationals 2: Our Miggy is Better Than Their Miggy

Almost the opposite today from the last couple of defeats - we got their starter early, scoring three runs in the second inning, and the Nationals never came within two runs the rest of the way. Washington has some chances, but couldn't take advantage, and Ian Kennedy had easily the best outing of the second half, throwing seven innings and allowing two earned runs. Miguel Montero went deep twice, once in the second and again as part our other three-run inning, the sixth, when we got five hits off former D-back, Miguel Batista. Nice to see the bats get going: hopefully some of it will carry forward to tomorrow.

As noted before the game, if we'd managed to lose to a pitcher with an ERA over fifteen in his starts this season, there'd have been something wrong. While Jason Marquis did manage to shave a little off his ERA this afternoon, we still succeeded in getting to him for five runs in four innings, and it would have been even more if we hadn't manage to all but waste a bases-loaded, no outs situation in the fifth. All we managed we was a run that scored on one of two Justin Upton double-plays on the day, allowing the opposition off the hook. Fortunately, we managed enough offense, and had credible pitching, so that it didn't matter.

Upton now has 19 for the season, a number surpassed in a single season by only two players in franchise history: Danny Bautista (20, 2004) and Orlando Hudson (21, 2007) - with 44 games left, the record seems set to fall. I'm not sure quite why Upton does that so often: obviously, it's partly due to the opportunities - a man on first with zero or one outs. But when you think of people who are prime double-play candidates, they're usually sloths like Benji Molina. I have expected that Upton would be capable of legging up the line and beating throw over to first on a few more of those balls hit to the infield.

On the more productive side of the offense, Upton and Mark Reynolds were the only starters not to get a hit. Even Kennedy got in on the fun, with a couple of hits, driving in his second run of the year in the sixth. Chris Young got three hits, while Kelly Johnson, Adam LaRoche, Montero and Gerardo Parra also had two apiece, with Johnson adding both of the Diamondbacks' walks to reach safely four times in all. Montero's two home-runs gave his eight on the year, in only his 48th game. I imagine, if we'd had a full season of Miggy, twenty or more homers would have been quite possible. His .503 slugging average now leads the team.

Ian Kennedy belied the idea that he was fatigued, at least for one more start, though it took him only 89 pitches to get through the seven innings he threw this evening. He allowed five hits and a walk, striking out seven Nationals' batters, including their lead-off hitter all three times he came up. The only time he was really in much trouble was in the fourth inning, when a couple of hits and a walk made the score 4-2 to Arizona, but Washington had men on first and second with one out. However, Kennedy coaxed Pudge to ground into a double-play, and Kennedy cruised the rest of the way.

Blaine Boyer and Sam Demel pitched scoreless innings in the eighth and ninth. That extended the streak by our bullpen without allowing an earned run to sixteen appearances on this road trip, covering a total of 16 innings in the past six games. The August ERA by our relief corps in aggregate is one of the best in the league for the month: 2.81, over 35.1 innings. While I'm not quite ready yet to proclaim them the second coming of the Nasty Boys, it's certainly a marked improvement of the performances we saw from them in the first half of the season - hopefully, something that can built on going forward. 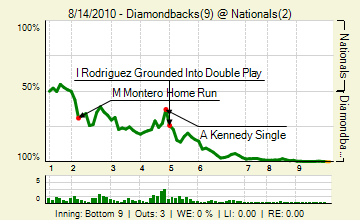 A pretty light GDT: Saturdays and early games tend to be like that, I think. justin1985 was the only poster to get past fifty, with hotclaws and blank_38 rounding out the top three. Also present: unnamedDBacksfan, morineko, kishi, mrssoco, Jim McLennan, Clefo, snakecharmer, MidnghtDrgn, Bryan J. Boltik, marionette, Rockkstarr12, BattleMoses, Jack Cromwell, piratedan7 and xmet. Comment of the Thread goes to BJB for his sardonic observation after the second of J-Up's twin killings.

I think it would better if

We just had Justin stand in the box without a bat and catch the ball and throw it in play. Probably will have like 5 homers in a game that way

And I'll cut this short, because there'll be a preview of tomorrow's contest up in about 20 minutes. Stay tuned for that, while I work on tomorrow morning's GDT. :-)