Share All sharing options for: Diamondbacks 4, Brewers 8: So close, and yet...

No, I didn't realize this was a one-run game either. But Yahoo! tells me otherwise.

Well, that was fun while it lasted, wasn't it? The winning streak game to a grinding halt this afternoon, as the Brewers teed off on Rodrigo Lopez, giving Arizona a six-run deficit by the end of the second inning. The Diamondbacks did try to come back, highlighted by a three-run homer from Stephen Drew, but couldn't get any closer than two runs, and blew a chance at completing a rate four-game sweep on the road, despite compiling more walks than in any other game this year.

Details of the non-sweep, after the jump.

There's been a bit of an ongoing debate over the recent uptick in team's fortunes, and the reasons for it. One side thinks new manager Kirk Gibson deserves credit, while the other points to the significant changes in personnel the team has seen in the past few weeks. I tend to lean toward the latter theory: I note that, since the new boss took over, the Diamondbacks have a record of 7-6 when the New Kirks on the Block (Barry Enright, Dan Hudson and Joe Saunders) start. But when the Hinch Guard (Lopez, Kennedy, etc.) take the mound, Arizona has now gone 8-16 under Gibson. That, to me, shows where the difference is in this team is: it's the new pitchers.

Arizona certainly had their chances, but outside of the fourth-run fourth, couldn't take advantage of them. Perhaps the best chance to complete the comeback came in the eighth, when we loaded the bases up, courtesy of a trio of walks, bringing the tying run to the plate with one out. However, Chris Young popped out to shallow left and, though Kelly Johnson worked the count full, ended up going down swinging at some high heat. Exactly the same situation repeated itself in the ninth: three walks, bases loaded, one out. However, Drew at least saved time, grounding into a double-play to end the game. I thought good things happen when you put the ball in play, Mr Grace?

The Diamondbacks left a dozen men on base, all told, and piled up a season-high ten walks, the most in a game without extra innings since April 2009 against the Cubs Failing to win, given all these free passes, is definitely a disappointment. Prior to this contest, teams who were walked ten or more times in regulation were 15-1 in the majors this year, so it has to count as a missed opportunity. There were multi-walk games for Justin Upton, Rusty Ryal and John Hester, while Young had a couple of hits in the lead-off spot. All our runs came in the fourth: after Adam Laroche and Mark Reynolds got hits, Ryal had an RBI single, and Drew a three-run bomb.

Unfortunately, by that time, Arizona were in a 6-0 hole, the result of another ineffective outing from Lopez. Three runs scored in the first inning - helped by a pair of walks, a hit batter and a passed ball, and a walk came round to cross home-plate as part of a three-run second. After two innings, Lopez had allowed six hits, three walks, and hit a batter. He did settle down somewhat, retiring the Brewers in order for the third and fourth, but a solo homer in the fifth capped things off. Seven runs, all earned, in five innings, is too much a hole for a starting pitcher to dig. DJ Carrasco allowed an unearned run in his two frames, and Blaine Boyer threw a scoreless eighth.

It just didn't feel like a very crisply-played game by the Diamondbacks, though it's hard to tell, since this one was (wisely?) not shown on TV. Reynolds was charged with a couple of error, and Drew a third. Neither Lopez (107 pitches for five innings) nor Carrasco (42 to get through two) were what you'd call efficient, and after the opening couple of frames, our chances of pulling anything back were rarely much more than slim. That's reflected nicely in the Fangraph below. 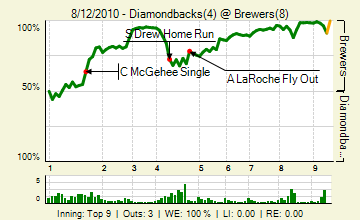 Stephen Drew, incidentally, landed almost flat, at +0.7%. He got +11.5% for his three-run homer, but most of that was canceled out by the game-ending double-play, worth -8.7%. 'Skins had more than a quarter of the 548 comments by himself: piratedan7 came second, with kishi and Bryan J. Boltik tied for third. Also present: Clefo, ZonaBacks10, piratedan7, Wailord, Jim McLennan, kishi, DbacksSkins, AJforAZ, BattleMoses, unnamedDBacksfan, hotclaws, Cup Noodles, Muu, GuruB, Sprankton, marionette and venomfan, Comment of the Thread goes to kishi, who said after a walk to Gerardo Parra:

“Well, I’ll check online, see how to pitch to this guy… Holy crap! They call him the RBI Machine? Pitch around!”

And it's on to Washington for a trio of games there, highlighted by Sunday's Clash of the Titans. Looking forward to that.