Technically, the title for this recap comes from the song playing when I walked into Moon Smoke Shop to buy a couple packs of Luckies today, but since that was RIGHT after the Dbacks' ZOMGBIGINNING, it seemed fitting. I would also have accepted "Bombs Over Brewtown" as a decent title for tonight's recap.

You'll also notice the "Change on 2004" heading is missing. As we're now 11 games above 2004, I'm making a decision to retire 2004 from my recaps -- at least until the Dbacks pass within 3 games or so of that dreadful season once again, IF they do. And, hopefully, they won't. Other authors don't have to follow, but I do think it'd be a nice optimistic move.

Details of another record-setting game in a lost season after the jump.

A leadoff single by CY was erased by Upton's double play in the first (more on that later), while Dbacks starter Daniel Hudson struck out the side in the bottom. In the second, Prince Fielder and Casey McGehee hit back-to-back homers to lead off the inning, and Chris Dickerson and Alcides Escobar followed with singles. However, thus began what Kirk Gibson, Hudson and others later described the "turning point" of the game. Dickerson got overly-aggressive and overran the bag on Escobar's single, getting hung up between second and third to yield the first out of the inning, with Escobar smartly (and fortuitously) reaching second with Dickerson in the pickle. The next batter, Jonathan Lucroy, hit a hard liner -- directly into Stephen Drew's glove, who immediately shot a laser to Kelly Johnson at second, doubling off Escobar in more of a pickoff play than a standard assist. It was the last runner to reach scoring position against Hudson until the 7th inning.

Gerardo Parra led off the 3rd inning with a single, snapping an 0-19 streak, but was stranded. After a 1-2-3 3rd, the ZOMGBIGINNING began...

Justin Upton led off the inning with a deep flyout to right field. Then, the dam burst, as Adam LaRoche did not. He whacked a deep line-drive homer for his 19th of the season and 74th RBI, only 16 away from his career high. Miguel Montero followed with a bomb of his own, his 6th, tying the game. Mark Reynolds, slamming his 26th, hit his first dinger since getting his bell rung. The Diamondbacks had then tied a franchise record with 3 HRs in a row, set only twice before, the last time in 2002. Then, Stephen Drew hit his 7th to do something that had only happened 6 previous times in history -- hit home runs back-to-back-to-back-to-back, and setting a franchise record in the process. The Dbacks joined a very select group, albeit one that has broadened significantly since 2006. The other teams:

If you're keeping score at home, that's 3x in 4 years during the 60s, and 4x in 5 years in the 2000s. A little odd, given that it's such a rare occurrence. Dave Bush also claimed the glorious distinction of becoming only the 3rd pitcher in MLB history to allow 4 HRs in a row.

The ZOMGBIGINNING continued with Gerardo Parra following up with another single, making him, to that point... WOO!!! 2 for his last 21. Hudson followed up with a successful sacrifice bunt, something he'd been unable to do his last time up, but Chris Young flied out JUUUUUST in front of the wall to end the ZOMGBIGINNING.

Given that Upton got out on a deep fly ball, as did CY, barely inside the park, the ZOMGBIGINNING was almost the ZOMGBIGGERINNING. An especially wonderful sign I noticed during the replay was Esmerling Vasquez jumping up and down in the bullpen, fists in the air, as Droo's blast sailed over his head. Nice to see that, despite the physical separation, we have our relievers showing emotion in supporting this team's hitters.

The other ZOMGBIGSTORY of the night was Daniel Hudson continuing to be awesome. Hudson, who touched 95 MPH on his fastball, allowed 7 hits and a walk while setting a career-high for strikeotus with 9 -- allowing only the two solo homers in terms of runs. Since throwing on a Dbacks uniform, Hudson has allowed just 4 earned runs in a total of 22.2 innings pitched. The two runs today, however, were the most he's allowed yet (OMG DFA!!) and ballooned his ERA from 1.15 up to 1.59. Time to panic?

Hudson was almost as effective at the plate, and improved in each PA tonight -- from a failed bunt attempt strikeout, to a successful bunt, to... well, his third PA.

In the top of the 6th, Miguel Montero led off with a walk, and Mark sent him to second with a swinging bunt(quoth Mark Grace, "His last time up, it went 400 ft. That time, it went 4. That's baseball."). Droo also droo a walk, and after getting up 2 strikes on Parra, David Bush hit him on the foot to load the bases. Ken Macha went to Todd Coffey, who thanked Macha by giving up a double into the gap by... our starter, Daniel Hudson, clearing the bases and making it 7-2. After CY and Kelly Johnson both walked, Upton did his best to ground into another double play but beat out a poor throw to first, driving in Hudson and capping the scoring at 8-2. Mark Grace applauded Upton for "Putting the ball into play and making good things happen", despite nearly erasing 2 baserunners.

As mentioned in the caption above, Daniel Hudson now has 5 RBIs since joining the Dbacks while only giving up 4 ERs. Not too bad for a guy who, until a couple weeks ago, hadn't picked up a bat since high school.

A forgettable 7th inning was Hudson's last, where the Dbacks were gifted an out by the infield fly rule (despite Mark dropping the ball, on an error awarded to Droo) before getting out of it with two more flies.

The bullpen continued its impressive streak of scoreless innings this series, but not without a slight bit of drama (as much drama as can be had in a 6-run game, anyway). After two quick outs, Rafael Rodriguez walked Corey Hart, hit Prince Fielder's preposterously large backside with a pitch, then gave up an infield single to Casey McGehee. KGB brought in Jordan Norberto to face Chris Dickerson, but Ken Macha countered by sending in the injured righty Ryan Braun to face our LOOGY. With the bases juiced, Norberto... struck out Braun on 3 straight pitches. Norberto returned to pitch a perfect inning in the 9th and close out the win. In a special Dbacks throwback touch, Craig Counsell popped out to Miggy to end the game. 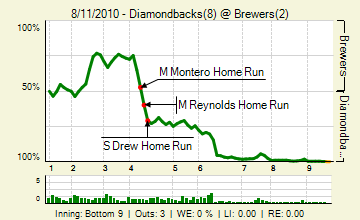 The WPA gives some well-deserved credit to young Mr. Hudson. As Jim noted in the Gameday Thread, he's now tied Robert Ellis and Curt Schilling in setting a franchise record, having won his first three starts in a Dbacks uniform. Let's hope his career turns out more like Schilling's (career ERA+ of 128) and less like Ellis' (career ERA+ of 79).

A quick word on Upton. We certainly give Parra plenty of grief for his grounding into double plays (8 in 88 games), but Upton not only leads the team, he came into tonight's game tied for 6th-most in the NL. He now has 16, double Parra's number, in just 22 more games. Now, we don't excoriate Upton as we do Parra, mostly because he does other good things for the team that Parra can't touch -- his OPS+ of 111 is second on the team to Kelly Johnson's blistering 123. So, despite the DPs, don't hate on Upton TOO much. It might be nice to recall that both Orlando Hudson and Conor Jackson also led the team in DPs. For some hitters, that's the price you pay.

The D'Backs are so awesome,
we can DH in the NL.

So, Rodrigo Lopez and the Dbacks take on the Brewers again tomorrow with the chance to sweep the Brew Crew in Milwaukee for the first time in franchise history. Be there, or... be an equilateral quadrilateral polygon.