Quick. Which pitcher, debuting this year and who has made four or more starts, has the best ERA in the majors? After tonight, the answer is the Diamondbacks Barry Enright. He held the Brewers to one run over six innings, allowing only a just-enough home-run and lowering his ERA to 2.64. Barry certainly deserved a better fate than a no-decision, but that's par for the course - in only one of his eight starts have his team scored more than four runs. However, Miguel Montero's home-run in the eighth inning gave Arizona the lead, and Sam Demel closed it out for his first career save in the majors.

Y'know, I could get used to this winning thing. Details after the jump.

It was another excellent performance from Enright, who gave the Brewers only three hits and two walks in six innings of work, with the only damage a solo shot to their #7 hitter. He took the heart of the Milwaukee order and schooled them - Planet Price and Week were a combined 0-for-5 off our starter. He had thrown only 93 pitches when he was lifted for the seventh inning, but it was another great outing by Barry - his six straight allowing two runs or less, and he has still yet to allow more than three in any of his eight starts in the majors. If he'd come up a month or so earlier, I would be thinking Rookie of the Year votes are possible.

The bullpen were equally solid, posting three more scoreless inning to add to the four delivered last night. Blaine Boyer took only 16 pitches to burn through the Brewers in the seventh and eighth, facing the minimum six batters. With Aaron Heilman overtaxed of late, Captain Kirk turned to Sam Demel - whom I nominate should be called "Sam the Slam" after he closed the door in the ninth. A lead-off single was erased by a double-play - kudos to Kelly Johnson for a particularly-nice pivot - and after a double, a groundout to Johnson made him the fourth Diamondback to record a save this season [the record is 1999, where eight different Arizona pitchers got saves!]

Early on, it seemed the offense was going to waste too many chances. In the fourth inning, Arizona loaded the bases with no-one out, on a walk to Justin Upton, a double by Adam LaRoche, and another walk to Miguel Montero. However, for the sixth time this season, the Diamondbacks failed to score a single run from this situation. Mark Reynolds struck out, having fouled off a fastball "right down the middle." Stephen Drew similarly missed his pitch, and flew out to fairly-shallow center - it was a little surprising Upton was held at third on that one. And Rusty Ryal completed the sequence of RISP fail, flying out to right to end the inning with three men still on base.

The Diamondbacks did level the game in the fifth inning. Chris Young doubled with one out, and then stole his second- base of the night, getting a huge jump on his way to third. He then sprinted home on a sacrifice fly to the second-baseman - not something you see every day. It was over the fielder's shoulder, and though he spun and made a good throw to the plate, Young hustled home and just beat the tag. However, the dark side of "aggressive base-running" showed its head immediately afterward, with LaRoche being thrown out, trying to stretch a single to right-center into a double. It wasn't even close.

Three more Arizona men were left on base in the sixth. We had two on with one out - Ryal was pinch-hit for by Ryan Church, who went down swinging. Enright was allowed to hit for himself; he had thrown only 69 pitches, so it made sense, and he legged out an infield single - our sole hit with RISP tonight, in eight chances. However, Chris Young couldn't come through this time, flying out to left-center. After an orderly seventh, Montero dispatched one off the batter's eye, for his fifth home-run of the season, to complete our scoring. LaRoche had two of our seven hits, with Young reaching three times, on a double and a pair of walks.

The win was Arizona's fifth in the last six games, and for the first time, gives Kirk Gibson a better win percentage than AJ Hinch. I'm still not convinced it's managerial skill, so much as an influx of better pitching arms which is responsible. The team's ERA since the start of July is 4.75, a great deal lower than it was up to the change-over (5.33). New arrivals Joe Saunders and Dan Hudson, and the ongoing success of Barry Enright, are a huge part of the improvement - over that time, they have now made a dozen starts, at a 2.58 ERA. While the usual small sample-size warnings apply, so far it seems a good foundation on which to build a rotation for 2011. 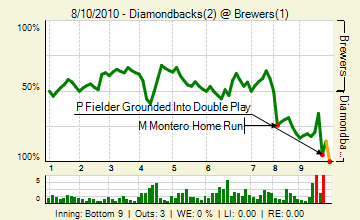 Another brisk GDT, cruising over 800 comments, and 'Skins crushed all competition, soaring past two hundred, with no-one else in three digits - Rockstarr12 came close, and NASCARbernet was third. Also present: Clefo, kishi, blank_38, emilylovesthedbacks, snakecharmer, unnamedDBacksfan, hotclaws, justin1985, Jim McLennan, txzona, 4 Corners Fan, blue bulldog, AJforAZ, morineko, pygalgia, BigPapaKishi, TinySarabia (welcome!), brian custer, Sprankton, marionette and venomfan. Comment of the thread goes to emilylovesthedbacks - for context, the discussion was whether the bullpen was getting better, and her response was

and then went to the game on Saturday. Thank God for CY, otherwise, I’d probably be dead from bullpen anxiety.

And no frickin' pictures again. It's like the AP don't want to go to Milwaukee or something. Maybe 'Skins can knock us up a quick diagram or whatever? [Edit. Tracked 'em down]