This game was something that we're not used to - us beating a team 14-1, rather than the other team beating us 14-1. Analysis of the whole thing after the jump.

Daniel Hudson's Diamondbacks debut started out well, having a no-hitter through .1IP! Then Jesus Feliciano decided to ruin it, singling to center, with Angel Pagan following that up with a single of his own. Then Ole David Wright stepped up to the plate and had a Reynolds-esque strikeout followed, by an Ike Davis fly out to get Hudson out of the jam.

In the 4th inning the LaHomers started coming. To start the inning, Chris Young hit a fly out to center, but then Kelly Johnson and Justin Upton (putting his hit streak at 17!) hit back-to-back singles, bringing Mr. Adam Laroche up to the plate. With one mighty swing of the bat, he made the score 3-0. Mark Reynolds then struckout hit a single and a Rusty Ryal single put more men on. Stephen Drooooooo ruined the fun, but a John Hester walk loaded the bases, bringing Doc Hud to the plate, who grounded out to the pitcher. The bottom of the fourth inning got the Mets a run too, with Angel Pagan walking, getting to second on a wild pitch followed by two fly balls that got him to third and then eventually score. Thus ended the Mets hopes of winning with the great Hudson on the mound.

The 5th inning started out almost identical to the 4th, with a Young fly-out, a KJ walk, an Upton single, and yes, a LaRoche LaThree-run homer! Reynolds then somehow got on base again with a walk, Cowboy Rusty reached because of a David Wright error. Drooo almost ruined the fun again by popping out to first, but a Hester walk kept things alive, which allowed Dan Haren Dan Hudson to hit a two-run single, but a second Young out in the inning ended the frame.

Not much going in the sixth, besides another Laroche hit and another strong inning by Hudson, who hadn't given up a hit since the first inning. The seventh saw back to back homers by Hester and Drew, padding the D-Back's lead. The 8th inning brought more scoring for the Diamondbacks. Gerardo Parra singled, with him advancing on a wild pitch, that let Mark Reynolds drive him in with another single. During the Mets half of the inning, Alex Cora doubled which ended Dan's 6.2 inning no-hitter. No further trouble though, leaving the score at 11-1 after eight played.

In the ninth, more scoring happened! A Drew walk, Hester single, and a Augie Augie Augie Ojeda single drove in another run. A hit by Chris young put the score to 13-1 and runners on 1st and 3rd with no outs. A Bobby Crosby sac fly brought in Augie, making it 14-1 with one out and a runner on first. Gerardo Parra struckout and Adam LaHomer flew out, ending the Diamondbacks scoring for the day. Esmerling Vasquez was called on to close out the game, and my first thought was, "Eh, the game will probably end up being 14-7 after our bullpen takes over".

Two pop outs to start the inning got my hopes up, but a Carlos Beltran single made them come crashing down. An Ike Davis single caused me to just about throw my computer, but a Mike Hessman strikeout had me jumping for joy A win, a Diamondbacks win! Why can't we play the Mets every series? A good start by the great and mighty Hudson got the Diamondbacks a victory - a 14-1 win to be exact. Runs were scored, something we're unaccustomed to here - at least, by our own team.

Hope you liked the recap and maybe you'll be seeing another one soon! 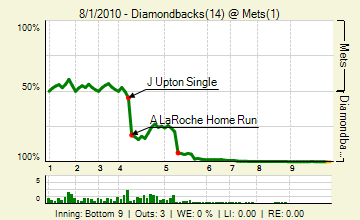 Almost up in overflow territory by the end of this one - amazing how much chattier people are when we score 14 times! DbacksSkins almost reached 200 by himself, justin1985 was in three figures, and Jdub220 was third. Also present: emilylovesthedbacks, mrssoco, soco, NASCARbernet, Rockkstarr12, Clefo, pygalgia, hotclaws, blank_38, piratedan7, snakecharmer, Jim McLennan, marionette, Cup Noodles, katers, AJforAZ, txzona, terps721, Torpedosneak, kishi, Azreous, brian custer and Muu. Thanks to terps721 for the recap; since you didn't pick a Comment of the Thread, I'll do so. Several green contenders, but the most fitting one was from hotclaws.

*Stands up to applaud Hudson*

This trade is already looking pretty good for Arizona.