Diamondbacks 10, Marlins 4: What is this thing called "Win"?

Share All sharing options for: Diamondbacks 10, Marlins 4: What is this thing called "Win"?

I think I'm inclined to prefer these Diamondbacks, over the ones which have showed up for the past five nights. Having scored only eleven runs in the entire Chicago series, Arizona had their hitting boots on, knocking out 15 hits, the most since the 8-6 win over Philadelphia, all the way back on April 25. There would be no no-hitter for Anibal the Cannibal, as it was the Diamondbacks turn to feast on him, scoring five times in the fourth inning, and adding another four in the sixth, to canter away to victory.

Details of this pleasing performance after the jump.

Admittedly, we were helped by three Florida errors, which gave us a couple of unearned runs. But the Diamondbacks also struck out only four times - that's the lowest total there in almost forty games - they've only had less one time this season, a three-K night on May 26 against Colorado [curiously, they also had four K's in the 15-hit game against the Phillies mentioned above]. Another point worthy of note, the team reached double-digits in runs without a homer: it's been more than two years since they've managed that feat, as you'd have to go all the way back to May 3rd, 2008 - actually, that one was a 15-hit night as well!

Gerardo Parra had four hits, and had a chance to become the fourteenth Arizona player to enjoy a five-hit night, but flew out, and so needed to "settle" for four, and a great diving grab in left. Kelly Johnson was, however, probably the hitting star - he matched Parra's four hits, but got one extra base and drove in three runs this evening. His triple was particularly amusing: it was a ball deep into the right-field corner, which Marlins' defender Mike Stanton tried to catch, but merely succeeded in kung-fu kicking the door to the visitors' bullpen. It flew open, knocking the Florida closer clean off his folding chair. If the baseball thing doesn't work out, a career in SWAT is a possibility for Stanton.

The team traded single runs early: Johnson got a ground-out to score Stephen Drew for third in the opening frame, but a sacrifice fly in the third evened things up for the Marlins. The Diamondbacks blew the doors off this one in the bottom of the fourth, scoring five times. Cole Gillespie gave Arizona the lead for good with a two-run hit down the left-field line, and Johnson's triple, mentioned above, added two more - Justin Upton capped things off with an RBI single. The sixth inning was almost as productive: Adam LaRoche, Mark Reynolds and Chris Snyder each drove in a run, and the tenth and last Arizona run crossed the plate on a Florida error.

Meanwhile, Rodrigo Lopez was proving largely smooth and extremely efficient, and delivered a quality start - he got through seven full innings on a total of only 88 pitches. The copybook was somewhat blotted as a result of a two-run homer with two outs in the seventh, but he ended with a line of three earned runs (plus one resulting from a Reynolds error), on five hits and no walks. Having been victimized badly by his defense the last time he took the mound, it was good to see him bounce back. Sam Demel then was effective, pitching two shutout innings to give his colleagues in the bullpen the night off.

The game was completed in a crisp two and three-quarter hours, but if you thought Chase Field sounded unusually empty tonight, that'd be because it was. The announced crowd was 16,664. If I am not mistaken, that is a franchise low attendance, beating the 16,792 who showed up for a game in April 2007 against the Padres. Maybe the Diamondbacks' players just don't like crowds? They played really well in the opening game against the Dodgers, in front of the smallest attendance of the series - and got totally creamed the next night, when an additional twenty thousand turned up. Same with the Cubs: the closest game that set was the one in front of the fewest people... 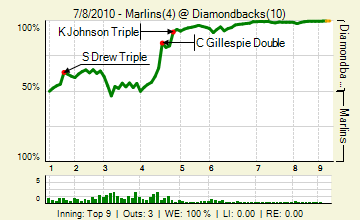 The GDT started off very quietly, but perked up in the middle, people apparently being drawn by the novelty of these new toys called "runs". Jdub220 and justin1985 dominated, both cracking three digits. Wailord was in third, but a long way back, not quite reaching fifty. Also taking part: Clefo, Jim McLennan, hotclaws, Rockkstarr12, kishi, emilylovesthedbacks, blank_38, Turambar, AJforAZ, PhoenixFly, BattleMoses, 4 Corners Fan, snakecharmer, mRcLeAn60 and Dallas D'Back Fan. Comment of the night? 4 Corners Fan's answer to the question, what's the best name for an octopus?