Diamondbacks 3, Cubs 8: A Chicago Hot Dog and a Cub, So Duh

Share All sharing options for: Diamondbacks 3, Cubs 8: A Chicago Hot Dog and a Cub, So Duh

Somehow, I don't imagine the Diamondbacks were hoping to start this homestand, the first games under the iron mustache fist of Kirk Gibson, 1-4. They were certainly trying not to go 1-5 in last night's game, but trying's only half of the game, and it's the execution part where Arizona has had particular trouble this season. After the jump, a curtailed recap thanks to massive computer issues and feeling the need...the need for sleep.

Edwin Jackson and Ryan Dempster, a matchup of pitchers not entirely living up to their potential this season (although Dempster's numbers are more deserving of a better record). Jackson was not at his best on this night either, allowing six hits and four walks in five innings and striking out just one, despite a decent strike-to-ball ratio of 62-38. He coasted through the first three innings, seeing just two hitters over the minimum (both walks), but ran into trouble in the fourth and fifth. There were no big blows, just a collection of small, damaging hits that eventually piled up to five earned runs.

The bullpen was decent tonight (Boyer and Gutierrez with three clean frames)...until Mr. Qualls came in. After four straight scoreless appearances, Qualls undid all his hard work by giving up a three-run jack to near-corpse Aramis Ramirez, ballooning his ERA back above 8 and his WHIP above 2. Thank you, Mr. Qualls.

The Diamondbacks certainly had their chances against Dempster: three singles in the second, but a caught stealing ruined their progress, and two on in the third. They broke through in the fourth, but it could have been so much more. Reynolds started the inning with a double, and Drew joined him on the bases after a one-out HBP. Parra laced a single to right, but too sharply to score a run. With the bases loaded, Jackson helped his own cause with a base hit, and Young did the same to drive in two more. But first and second, one out, no further damage was done in the inning -- or the rest of the game. 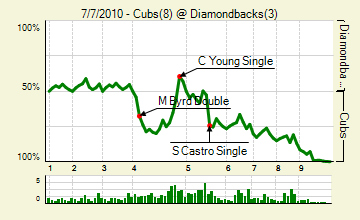 All the folks who lament the roll call being run right after the final out, this one's for you -- it's almost three in the morning. No excuses for the comment padders this time around. Justin edged soco by five posts, and they were the only ones in triple digits, although Emily came close. The list: Skii, 4 Corners Fan, i'moscar.com, hotclaws, Counsellmember, Clefo, piratedan7, justin1985, snakecharmer, Jim McLennan, kishi, emilylovesthedbacks, pygalgia, Seth Pollack, katers, mrs snakepit, Rockkstarr12, blue bulldog, Wailord, BattleMoses, AJforAZ, soco, Zavada's Moustache, DbacksSkins, jonny-yuma, unnamedDBacksfan.

Comment of the Night: You folks only made two comments green, and one of them had the most recs by far. Who am I to go against the popular vote?

Tomorrow is the opener of a four-game set against the Marlins, and the latter part of this 10-game homestand on which we've currently lost five straight. Go Diamondbacks?