Diamondbacks 4, Cubs 6: Four On The Floor

Share All sharing options for: Diamondbacks 4, Cubs 6: Four On The Floor

Four games in a row lost by Arizona, with the Diamondbacks averaging only 2.5 runs per game over that streak - but fanning at least ten times in each contest, and with a K:BB ratio of 50:13. Barry Enright had a decent start, but the Cubs scored three times in the sixth to take the lead, and Aaron Heilman's recent stretch of bad outings continued, as he allowed a two-run homer in the eight which proved to be the margin of victory.

Having not managed to see very much of the game, and as it's already 11pm as I pen these words, this won't be my most informed or detailed recap. I'm pretty sure this isn't a game, on which anyone wants to dwell. But it's there, after the jump, should be so inclined.

The Diamondbacks scored first, and that was the only run through the front five. Mark Reynolds walked, and a ground-rule double by Adam LaRoche was followed by a sacrifice fly from Stephen Drew, and the score was 1-0 to us. The team should certainly have added to the lead in the fourth, after singles by Justin Upton and Miguel Montero put men on the corners with no outs. But our struggles in potentially lucrative situations continued, as Reynolds then struck out swinging and LaRoche grounded into a double-play. I'd like to thank the D=backs for demonstrating how to fail miserably both a) when not putting the ball in play, and b) when putting the ball in play, in the same inning.

Meanwhile Enright was doing pretty well on the mound: through five innings, he had allowed only three hits and a walk. The Cubs were held scoreless, and had only even had a single at-bat with anyone in scoring position. I did see his fourth inning of work, and he was pitching well, throwing strikes, but adjusting his attack to keep the hitter off-balance. However, the wheels fells off the Barrymobile in the sixth, as he allowed two homers and two doubles, resulting in three runs. It would have been even worse, except for the Parrazooka gunning down an unwise Cubbie, attempting to stretch two bases into three.

The second homer ended Enright's night after only 78 pitches, one out short of a quality start. His final line was 5.2 innings, seven hits and a walk, with three runs, all earned and five strikeouts. That'll do, Barry: that'll do. Sam Demel struck out the last batter, and Kelly Johnson homered in the bottom of the sixth to make it a one-run game. But when Demel came back in the seventh inning, he struggled. A one-out single was followed by two wild pitches and a walk. helped the Cubs to score another run, with Esmerling Vasquez allowing a two-out know, after Jordan Norberto, apparently now a LOOGY, got a strikeout. That made the score 4-2 to Chicago at the end of seven.

Aaron Heilman was once the closer, but apparently is no more, though we won't know for sure until the Diamondbacks actually get a save situation. I believe that has tentatively been penciled in for "Save Night" at Chase, some point in the second half of September. Anyway, since Chad Qualls' last spot of ninth-inning action, on June 13, Heilman's line is now:
Heilman: 8.2 IP, 12 H, 7 BB, 9 R, 8 ER, ERA 8.31
Tonight, he allowed two runs before retiring his first Cubs batter. In other words, seems like Heilman is now part of the bullpen problem, not the solution.

The DIamondbacks rallied to tie the game in the bottom of the eigh... Oh, my mistake. They might have tied the game, if Heilman hadn't just doubled the Chicago lead in the top half of the inning. Silly Aaron. A Rusty Ryal pinch-hit double was followed by Chris Young reaching on a error, and RBI singles for Kelly Johnson and Justin Upton. However, with the tying run on base, Miguel Montero and Mark Reynolds did the inevitable, both men striking out - Reynolds staring at strike three as our last real hope died. Arizona added three more K's in the ninth - that was a total of nine during the last four innings - letting the Cubs seal the series victory.

And, I have to say, barely 20,000 for the Cubs at Chase tonight? Ouch That's about ten thousand less than were at the park for the comparable game last year [also a Tuesday, just a bit earlier in the season, at the end of April]. Guess it proves that the local Cubs fans in Arizona are a bunch of bandwagoning frontrunners too, and certainly can not claim any superiority over those who support the local team. 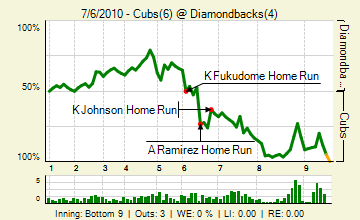 Another lightly-trafficked thread,and it'd have been even more desolate save Jdub220, who almost matched the total of numbers 2-4 (hotclaws, PhoenixFly and pygalgia). Also taking part - some more than others! - blank_38, Jim McLennan, hotclaws, snakecharmer, justin1985, emilylovesthedbacks, kishi, Clefo, Counsellmember, katers, Wailord, NASCARbernet, unnamedDBacksfan, AJforAZ, 4 Corners Fan and venomfan. I did enjoy NASCARbernet's impromptu Big Unit filmography (The Longest Johnson!), but I was wondering, just today, how long before I should break out the end of season countdown. While I may not fully endorse the sentiment below, I trust you understand why it's a fitting Comment of the Night:

I am sorry for neglecting you the last 2 months. Like many DBacks fans, I was excited for the start of the 2010 season and eagerly participated in the GDT for a solid month and a half. But the plethora of blown saves and an under-performing team took its toll on my usually pleasant demeanor. Present company may disagree, but swearing at the TV every night does not benefit one’s relationship with one’s wife.

I still check the nightly score on Yahoo Sports, I still read articles on dbacks.com and The ’Pit and MLBTR, and I still want the team to win. But I am turning off the pain for the rest of this season.