Diamondbacks 4, Cubs 9: The Doom That Came To Chase

Share All sharing options for: Diamondbacks 4, Cubs 9: The Doom That Came To Chase

Life is a hideous thing, and from the background behind what we know of it peer daemoniacal hints of truth which make it sometimes a thousandfold more hideous. In the land of Diamondbacks fandom there is neither time nor space, only suffering and death. Sabermetrics, already oppressive with its shocking revelations, will perhaps be the ultimate exterminator of our human species for its reserve of unguessed horrors could never be borne by mortal brains if loosed upon the world.

I begged for a release from this hideous torment. But Dar-On was unmoved, and cried: "If I am mad, it is mercy! May the gods pity the man who in his callousness can remain sane to the hideous end!" Unhappy is he to whom the memories of baseball bring only fear and sadness. Such as today's game.

I yearned mightily to enter this fascinating yet repellent city of Zhic Argo, and besought the bearded man to land me at the huge carven gate of Rhig-Lea; but he gently denied my wish, saying: "Many have passed but none returned. Therein walk only daemons and mad things that are no longer men, and the streets are filled with the unburied bones of those who have died since they last won a World Series, or looked upon the indescribable terror of Loupin Yella, that reigns over the city." And so, I returned home to Phoenix. But the blue horrors were relentless and pursued me even to the depths of the sun-blasted landscape, and tormented me further here.

That AJ Hinch should ever have became our manager was a mistake. These things should be left to the frigid and impersonal investigator, for they offer two equally tragic alternatives to the man of feeling and action; despair if he fail in his quest, and terrors unutterable and unimaginable if he succeed. I recall that the team interns went about with pale and worried faces, and whispered rumors and prophecies which no one dared consciously repeat or acknowledge to himself that he had heard. A sense of monstrous guilt was upon AZCentral.com, and out of the abysses between the stars swept chill currents that made men shiver in dark and lonely places. Like Gilbert.

In his place, Kirk Gibson had emerged with a soul calloused and seared, and a hardened eye which sometimes glanced with a kind of hideous and calculating appraisal at men of sensitive brain and vigorous physique. But even he could not withstand the grotesquely heterogeneous Khub-Bhees who infected Chase with their monstrous chants. Their outlines were human, semi-human, fractionally human, and not human at all: a horde of tame, trained, hybrid things that no sound eye could ever wholly grasp, or sound brain ever wholly remember. They were not altogether moles, nor buzzards, nor decomposed human beings, but something I cannot and must not recall.

Ok. Fun though it is to cobble together an HP Lovecraft pastiche for a recap, that can't quite capture authentically the indescribable horror which was this afternoon's game. Though the Cubs leaped ahead early, scoring four runs before they'd made four outs, the Diamondbacks had plenty of chances to get back into the game. Bases loaded in the first - nothing. Bases loaded no outs in the third - a sacrifice fly and a double-play. Man on third, nobody out in the fifth - he's stranded there. Bases loaded, one out in the sixth - a sacrifice fly and a strikeout looking by Justin Upton. We got nine walks from the Cubs, but only two scored.

Kirk Gibson said that the team needs to cut down on K's and improve the base-running. Chris Young certainly was listening: he was on-base four times this afternoon, with two hits and two walks, and stole a couple of bases, to become the sole member in the majors of the 15/15 club. However, the rest of the team... Not so much: eight of the last ten outs Arizona made were by K, and we ended with 12, reaching the dozen mark for the third straight game under Gibson. The 40 strikeouts there are more than any three games from the Hinch era. Miguel Montero and Mark Reynolds walked twice; Kelly Johnson had a hit and a walk. But Upton under Gibson is 0-for-14 with nine K's.

Meanwhile, the Cubs were taking full advantage of any opportunity presented to them - they scored nine, while leaving only three men on base. Ian Kennedy was not sharp, from the first batter he faced, allowing a Cubs home-run to start the game. The second inning started single, single, triple, double, and the Diamondbacks found themselves four runs down. He settled down a little after that, but allowed another run in the fifth and two more in the sixth before he was lifted. The final line, of seven runs on nine hits in 5.2 innings, with six strikeouts, was Kennedy's worst performance of the season.

The bullpen was a bit of a mixed bag. Jordan Norberto and Chad Qualls each pitched a scoreless inning, but the nemesis of Juan Gutierrez raised its ugly head again. He allowed a two-run shot to Alfonso Soriano, who is now 8-for-16 with five home-runs against us this season: he has only played five games versus the Diamondbacks, and has more than half his homers this year off Sedona Red pitchers. But overall, two runs in 3.1 innings of work is better than usual, and keeps our bullpen ERA for the season moving in the right direction - it's all the way down to... er, 6.88 now. Would you like to borrow my microscope so you can enjoy that very small comfort? 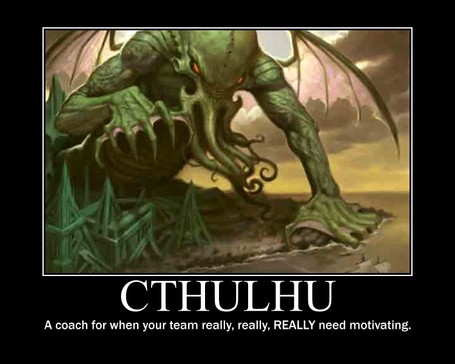 A lightly trafficked thread on this holiday, ending a tad short of 600 comments. NASCARbernet topped the list, ahead of soco and emilylovesthedbacks. Others taking part: Clefo, Rockkstarr12, BattleMoses, kishi, BigPapaKishi, hotclaws, Turambar, Jim McLennan, blank_38, Wimb, snakecharmer, luckycc, mRcLeAn60, Zephon, 4 Corners Fan, Azreous, Jdub220 and Wailord. Much though I liked luckycc's response to a typo of "Ehre? I'm sorry; I believe you have your keyboard set to Elvish," there can be only one Comment of the Thread, and with what I think is a record eight recs, it has to be hotclaws' LOLCub: The Gibson era continues to sputter on, with three losses in the four games. Losing two of three to the Dodgers is not terrible, but the Cubs are basically another bad team, and one we should be able to hold our own against, especially at home. This afternoon was not an encouraging step in that direction, to say the least.