Share All sharing options for: Baseball Players: Does Size Matter?

This was somewhat inspired by an article linked to in SnakeBytes a couple of weeks ago, which listed the tallest and heaviest players ever to play in the majors. At the time I said I'd write up a similar piece for the Diamondbacks, detailing our maxi- and mini-sized players. You'll find that in here as well, but from that original idea spun off a couple of interesting thoughts. Are bigger players "better," statistically speaking? And how has the size of those taking part in major-league baseball changed over history?

Join me after the jump, and we'll take a look at all of these topics, and you'll also get to see the tallest baseball player ever, go down on three straight swings...

Important note: This is just for fun, not a statistically-rigorous investigation. Firstly, things like height and weight are not subject to any kind of independent verification: there is no commission to organize spring training weigh-ins (except, perhaps, in the case of Ronnie Belliard...). Secondly, Baseball-Reference.com, my source for all the numbers used here, only has a single number for a player, when in reality, their weight can vary radically over the course of their career - check out Barry Bonds' rookie card for a good example. I'm completely ignoring such fluctuations. So, as I said: this is just for fun.

Let's start with the tallest, shortest, heaviest and lightest players in Diamondbacks history.

While some names hardly count as a surprise, there are other players which I did not expect to see on these lists. Who would have guessed Yusmeiro was clearly the not-so Petit Unit? That Daniel Cabrera was just behind Rauch and Johnson in terms of height? Or that Tony Womack was such a lightweight [literally speaking]? Oh, and in case you're wondering, Augie Ojeda is 5'9". :-)

There's a time when that would actually have been about average height for a baseball player, albeit more than a century ago. The charts below are based on the median height and weight for all players active that year: the "median" basically means, if you lined them up in order of height, say, the median would be the height of the player in the dead-center of the row. Here are the height and weight charts: on both, pitchers are shown in red, hitters in blue. 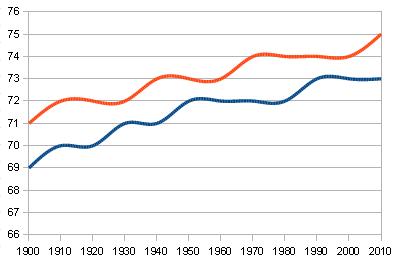 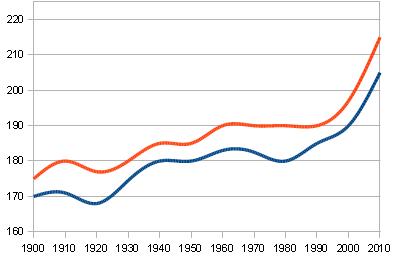 As the general population has grown taller, so have players. Between 1900-1970, the average height of a man in the US increased from 67 to 70 inches, and the height of baseball players went up by the same amount. However, the same doesn't quite appear to be true as far as weight goes. Sure, it has increased almost steadily, but the rate of increase has gone up sharply in the past couple of decades. Between 1940 and 1990, the average pitcher and hitter increased by only five pounds each. But in the past 20 years, batters have gained 20 lbs, and pitchers 25. Steroids? Better training regimes? Nicer buffets? I've no idea. Interesting, though.

So, does size matter? Are bigger baseball players better? To find out, I looked at the 2009 stats for all players in the majors who had 300 PAs or worked 50 innings. I then ran a series of correlations between their height and weight, to see if there was any connection between, say, height and strikeout rate, or weight and home-run rate. This number runs from -1 to +1. Anything at either end means there's a strong correlation, while something close to zero indicates that there is no apparent connection between the two numbers.

Starting with hitters, BA does not appear to be affected significantly by height or weight. OBP shows a weak correlation. That runs counter-intuitive to what you might expect: shorter players have a smaller strike-zone, more difficult for pitchers to hit [see Eddie Gaedel, below]. But it seems large guys do tend to walk more often, perhaps because they're being pitched more carefully. That would make sense, since in SLG, larger players have a clear advantage (they also K more often). This becomes even more pronounced when we look at just HR rate, where we see the largest correlations of all. Big guys hit more home-runs. I wonder why I had to look at stats to prove that.

However, things are radically different when we look at pitching numbers. You'd expect the "plus-sized players" like Jonathan Broxton [stop drooling, Gracey!] to be the flamethrowing strikeout pitchers, but there's no significant proof this is the case. A good counter-example would be Juan 'Famine' Cruz, so named because he looked like the victim of a famine - probably caused by Broxton - but still struck-out batters at a tremendous rate. Overall, unlike in the batter's box, there's little or nothing to suggest any aspect of pitching results are directly related to the hurler's height or weight.

[The Google spreadsheet with the data used can be found here, if anyone wants to fiddle around with it.]

Finally, the tallest baseball player ever? That would be the 7'3" Dave Rasmussen, President of the Tallclub of Milwaukee. In May 2007, the Saint Paul Saints, run by Mike Veeck, presented the "Saints Largest Promotion Ever". That gave an official at-bat to Rasmussen, the tallest player ever to appear in a professional baseball game. Of course, Mike's father, Bill, used the other end of the spectrum for self-promotion, when "little person" Eddie Gaedal, 3'6" tall, walked on four pitches for the St. Louis Browns in 1961. Below, you can see footage from the event, including three of the ugliest swings I've seen since... Well, the last Doug Davis start, probably...