Yes, I just wanted to be first on the bandwagon there. In what has got to be the shortest and least satisfying honeymoon since Anne Nicole-Smith married her octegenarian oil-tycoon husband, the wheels fell completely off the Gibbymobile tonight. Highlighted by six errors from the Arizona Diamondbacks infield, leading to eight unearned runs, this was the most spectacularly awful performance, possibly in franchise history. I can only think of two people possessing any Sedona Red clothing who might have enjoyed this - I can imagine Josh Byrnes and AJ Hinch sitting in a bar somewhere, laughing uproariously as this one unfolded.

Now you know what you have to deal with, Mr. G. You have fun with that. Details after the jump.

Perhaps surprisingly, eight unearned runs isn't that rare an occurrence. We're not the first National League team to have done it this...well, week, actually. The Cubs allowed eight just yesterday in fact, as they lost 12-0 at home to Cincinnati. It isn't even a new franchise record, as on their way to the World Series in 2001, the Diamondbacks also allowed eight in the last game of the regular season against the Brewers. However, all of those came in the same inning, part of a ten-run Milwaukee fourth that was extended by only two errors. Here, the suckage was much broader in scope and style: even the home-plate umpire, at one point, gave the Dodgers a walk on three balls.

And the game started off so.. calmly, too. The Dodgers went down in order, and the Diamondbacks obliged by having Tony Abreu caught stealing in their half. It was the second inning where things melted down faster than a portion of soft-serve accidentally left on a Phoenix car-seat. Error #1 was by Rusty Ryal, on a fairly hard-hit bat that squeezed it's way past him. Error #2 looked like an ill-advised effort by Tony Abreu - starting at shortstop - to turn a double-play, rather than getting the sure out, on a soft groundball hit to him by the opposing pitcher. Everyone was safe, a run came home, and there was a two-run single and two-run homer before the inning mercifully ended.

This was, however, Gold Glove defense compared to the third, where three consecutive Dodgers got on base thanks to infield gaffes. Blake reached on a throwing error by Mark Reynolds, then scored when the next batter, Paul, reached base on Ryal's throwing error. Fortunately, Paul was thrown out after turning towards second, because Martin was safe on another Abreu error. Then, in the top of the fifth, Abreu's third error of the game made it 11-0.  I trust Gibson learned his lesson. Specifically, cramming your line-up with right-handers is one thing, but when it leads to half your infield i.e. Ryal and Abreu, playing out of their normal positions, the resulting five errors might kinda counterbalance any offensive boost.

Still, even if we take all the errors and the runs which resulted out of the equation, this was still a miserable performance by the Diamondbacks. We came within Reynolds' solo home-run in the ninth - the first allowed by Jonathan Broxton this year - of suffering only the second shutout loss by a margin of 14+ in the major-leagues this season [the Brewers pounded the Pirates 20-0 in April]. That also spared us the embarrassing fate of having as many errors as hits in the entire game - Reynolds had two of Arizona's seven hits, while Abreu had a hit and a walk,. though that hardly countered the massive friendly-fire inflicted on the team by his mad defensive skillz.

The pitching hardly mattered, in the face of such relentless defensive indifference and offensive incompetence, but was hardly anything to write home about, as we allowed fourteen hits to the Los Angeles offense. Rodrigo Lopez was tagged for nine runs in 3.2 innings, but only two of those were earned. The rest of the game was most notable for Dontrelle Willis making his second-ever career appearance out of the bullpen. The good news: he didn't walk anyone. The bad news: three hits, a hit batter and three earned runs in his inning of work. Sam Demel, Esmerling Vasquez and Chad Qualls were called in to perform mop-up duty as things wound down. 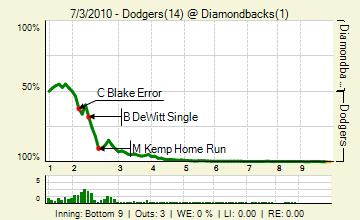 Got to feel for Lopez: while he wasn't brilliant, he really wasn't -39% bad. Still, that's the breaks. Much credit to those who stuck it out in the Gameday Thread, though by the end, it was two tumbleweeds and a saguaro in there. No-one reached fifty comments, with hotclaws coming closest, pipping Wailord by one, with pygalgia in third. Also present: Azreous, BattleMoses, mrssoco, Clefo, snakecharmer, emilylovesthedbacks, blank_38, katers, kishi, DBacks_UA, 4 Corners Fan, eel, BigPapaKishi, Bryan J. Boltik, NASCARbernet, blue bulldog, AJforAZ, Rockkstarr12, Jim McLennan, piratedan7, mRcLeAn60, Jdub220, soco, SeanMillerSavior, Reynolds rapper and Skii. Comment of the night? Much though I laughed at BigPapaKishi's studied apathy, I'm going with:

FIRE HIN- oh what? They already did that? Well who is managing now? Is he fiery?

Many a true word... I am curious to see what Gibson has to say after this one, but I just couldn't be bothered to turn on the television to see. But never fear, for our season is saved! For SB Nation Arizona reports that Brandon Webb is "hoping for 6 to 8 starts this season." Said Webb, "I can start to see it. I'm still a ways off, but the light is there. It's still dim, but it's reachable." I think I probably speak for most Diamondbacks fans when I say that pronouncements like the above - which we've been hearing since spring training - are why Webb's chances of becoming one of the Racing Legends are now about as flatlined as the Fangraph above.

I'll be back in the (late) morning with SnakeBytes, and guest recapper justin1985 will be covering the game, under whoever replaces Gibson. What? He's not to blame for tonight's atrocious performance? AJ Hinch would appear to want a quiet word with you about that...