The Mets finally managed to do what every other team has had no problems with tonight - beat the Diamondbacks. However, it wasn't until two outs in the ninth inning that they managed to do it. A sacrifice fly with one out scored the runner from third without a throw. DJ Carrasco, acquired in the trade for Chris Snyder, made his debut for Arizona and looks like he'll fit right in with the rest of the bullpen, allowing two runs in two-thirds of an inning. However, we got another quality start from Barry Enright, and Justin Upton extended his hitting streak to sixteen games - that ties for tenth longest by a Diamondback in franchise history.

Details, after the jump, except...

...except, you're going to have to provide them. I was at work for the first part of the game, and then went to a surprise birthday dinner for Mrs. SnakePit, with friends and family. So I can offer absolutely no insight into this game at all. Thus, this will be a communal recap: please chip in and contribute a paragraph in the comments with your thoughts on the game. Here are a few potential talking points: 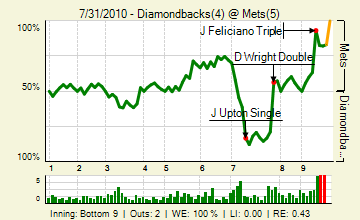 Almost 700 comments in the GDT, with DbacksSkins over 150. justin1985 was also in three digits, with piratedan7 completing the podium. Also present: Clefo, Azreous, Wailord, Jim McLennan, Prosopis, kishi, katers, Cup Noodles, hotclaws, marionette, Torpedosneak, venomfan, brian custer, AJforAZ, Chris24Young, morineko, rapdawg, Jack Cromwell, ChrisHansen, NASCARbernet and pygalgia. If you look through the list, you'll notice a familiar name, who takes Comment of the Night for his response to piratedan7's mention of "all the guys posing as girls in chat rooms….or so I’ve been told….by a friend….who um…follows that kind of thing… supposedly."

Why don't you have

a seat over here.

Ok. I'm off to continue celebrating Mrs. SnakePit's birthday, so have at it folks. Make me proud with this communal recap. We'll be back in the morning for the 10:10am (Arizona time) start, and the guest recap tomorrow. Snakebytes will follow in the afternoon, and we'll also be announcing a special project which'll run all the way through next week.