Diamondbacks 9, Mets 6: Montero has More of the Wright Stuff

Share All sharing options for: Diamondbacks 9, Mets 6: Montero has More of the Wright Stuff

It looked early on as if David Wright was going to carry the Mets single-handedly over the Diamondbacks at City Field this evening, as he homered twice in the first three innings off Ian Kennedy, driving in five runs. However, Kelly Johnson and Miguel Montero had other ideas, replying with two homers and five RBI of their own during the sixth inning for Arizona. As a result, the Diamondbacks ended their seven-game losing streak, and also won their fourth consecutive game over the New York Mets. They are now 4-11 in their last fifteen games, with all four wins against New York. Shame we have to play the other teams in the National League, really.

Arizona started out against Mike Pelfrey, much as they had left the pitcher at Chase i.e. pleased to see him. He suffered death by paper-cut in the first inning, the Diamondbacks scoring three runs before making the second out, on four singles, a walk and a throwing error. However, the lead was wiped out in the bottom half with one swing of Wright's bat. While the Diamondbacks put two more on in the second inning, it was a Stephen Drew RBI double in the top of the third that gave us back the advantage - again, until Wright came up, in the bottom half, and clubbed another long-ball off Kennedy - this one a two-run shot.

That's where the score stayed until the fateful sixth. With one out, Kennedy reached on an error, but a Chris Young flyball resulted in the second out, and the Mets turned to their bullpen, to ensure the tying run stayed at first. Big mistake. In a meltdown of Arizonan proportions,. Raul Valdes came in and the next four batters went two-run homer, single, single, three-run homer. Johnson provided the first, with his 17th long-ball of the year, and Montero his fourth. Miggy finished a triple short of the cycle - no Molina-esque heroics to be found today - and has driven in 22 runs in only 37 games.

Justin Upton singled as part of that enjoyable sixth, extending his streak there to 15 games. It's beginning to count as a "real" streak - there have only been two longer by a Diamondbacks' player in the past six years: Drew had one of 17 in 2008, and Upton had an 18-game run in April and May last year. J-Up also walked, while Johnson had two hits and a walk, and Young, Mark Reynolds and Adam LaRoche each had two hits. Arizona managed 13 in total, an amount of production last surpassed by them over three months ago [they had 14 against the Cubs on April 29].

Ian Kennedy got the win, and the Mets not named "David" managed only one hit off him in six innings of work. It's not often you'll see a pitcher allow only three hits in six frames, and end up giving up five earned runs. The last time any starter in the NL had a line line like that was Luke Hudson of the Reds, more than five years ago. It was, of course, the walks that hurt. Kennedy walked four batters, and two of them came around to score courtesy of Wright. Blaine Boyer was a bit wobbly, allowing three hits and a run in the seventh, but Chad Qualls and Aaron Heilman posted zeroes in the eighth and ninth to end the Diamondbacks' losing-streak. 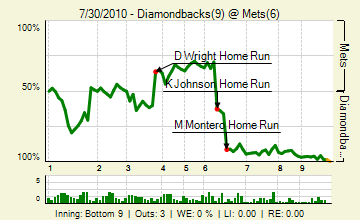 Over 850 comments in the thread, which is the most for some time,. I think. The usual suspects - and I mean that in a good way! - led the way, with Jdub220, justin1985 and Jack Cromwell, all breaking a hundred. Also taking part were: Clefo, kishi, piratedan7, snakecharmer, hotclaws, Wailord, BleedingSedonaRed, venomfan, marionette, Rockkstarr12, emilylovesthedbacks, yankeepanda44, Jim McLennan, MidnghtDrgn, AJforAZ, NASCARbernet, DbacksSkins, unnamedDBacksfan, Spaghetti_Monster, brian custer, misterx1978, Joel Preston and 4 Corners Fan. Comment of the Night goes to venomfan, for his solution to a Mets offensive threat:

trade Parra to the Mets and put him at the plate. Guaranteed DP

Oh, and if you're wondering about the delay in the game, because a fan ran onto the field, turns out he was carrying a Mexican flag. No word on whether he was planning to burn it or not...

Rumbling regarding more trade possibilities, with the deadline being tomorrow. FoxSports are saying, "The Diamondbacks and Pirates have spoken about a trade that would send catcher Chris Snyder to Pittsburgh, major-league sources said Friday. Arizona would almost certainly need to include a substantial amount of cash in the deal." We'll keep an eye on that, and any other possible deadline swaps, tomorrow.