There's a soccer chant that gets used at games, generally sarcastically, when mediocre teams suddenly start playing far above their usual level. "It's just like watching Brazil," shout the fans - and through the front three innings tonight at Chase, the feeling was much the same, as the newly-energized Diamondbacks steamrollered there way to nine runs against the Dodgers, who had won eight of the nine previous encounters this season. Good hitting, timely hitting, aggressive base-running: this was the 2010 Arizona team we wanted to see.

Edwin Jackson was not perfect. Far from it. But he was good enough, and a three-run homer by Chris Young gave us enough of a lead that even the Diamondbacks bullpen couldn't blow. Kirk Gibson thus became only the second manager in franchise history to start with a win. After the jump, we'll take a look at the other managerial debuts, and revel in the powerhouse which was the Arizona offense on this occasion.

The New Diamondbacks didn't take long to make an impact, scoring Gibby his first run before they'd made an out: new leadoff hitter Chris Young singled, took second on a wild-pitch and then came home on a Kelly Johnson single. A Mark Reynolds single and Tony Abreu double made it 3-0 to Arizona, and though the Dodgers pulled back to within one in the top of the second, the Diamondbacks hit back with three more runs in the bottom half. Jackson scored on a wild-pitch, and this was followed by runs being driven in by Miguel Montero and Mark Reynold, getting the Dodgers' starter, Hirokui Kuroda, pulled from the game.

However, as kishi pointed out in the Gameday Thread, that was "only his second-most painful departure from a game against the Diamondbacks." Admit it, you laughed. But, what? You want more offense. Hey, you only needed to hang around until the third inning, when Young had a two-run double and Montero added a sacrifice fly, giving Arizona a 9-3 lead after three frames. Perhaps most remarkably the team had scored all nine without a home-run - if that had held, it would have been a season-high for a homerless game, but Chris Young, showing a shocking disregard 0for such things, blew that up with a three-run shot in the seventh - his fifteenth HR of the year.

Going on the evidence of this first game, it seems clear that the Diamondbacks are going to accelerate things on the basepaths. Young, Reynolds and Johnson all stole bases [Young becoming the only member of the 14/14 club in the majors], though Reynolds was also caught, and Justin Upton got caught straying too far off first-base in the opening inning, and was picked off by the catcher. Still, with 13 hits and seven walks, there wasn't much need to take chances. Young had three hits and drove in five; Johnson, Montero and Reynolds each got two hits and a walk, while Parra, Abreu and Upton each reached safely twice.

Scoring a dozen runs provided a certain zone of comfort, as Jackson showed no inclination to repeat much of his no-hitter - except, perhaps, the wildness. He walked three in five innings, and also allowed seven hits, which got him tagged with four runs - score one for the pitch-count brigade. Jackson only threw 88 pitches tonight; however, he still got the W. Sam Demel looked a bit less impressive than I've seen him, allowing a run in the sixth, which got Los Angeles within grand-slam distance of Arizona, but Esmerling Vasquez, Aaron Heilman and Blaine Boyer posted zeroes the rest of the way

Boyer was also in charge of manning the bullpen phone, Glenn Sherlock having gone up to the dugout to become the temporary bench coach, in place of Kirk Gibson. It wasn't the only quirky event of note this evening, as it was also the debut of the Racing Legends around the park. Let the record show that the inaugural race was won by Randy Johnson, though some concern was expressed in the Gameday Thread over the apparent hunchback being sported by Luis Gonzalez. The Gonzo of Notre-Dame, perhaps? Anyway: a thoroughly satisfying way to start the Gibson era. Maybe we just need to fire managers more often? 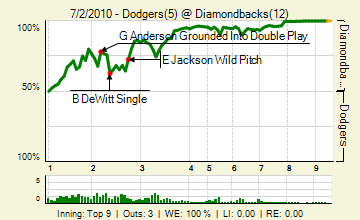