Welcome to Arizona, Joe Saunders. This afternoon was a pretty good synopsis of what you can look forward to here: some bone-headed defense and a lot less in the way of offensive support. But I thought you were "one of the winners in Major League Baseball"? So does this mean you need more than one run to get the W? Sheesh, the Angels never bothered to tell us that. Did we keep the receipt, Jerry?

Elsewhere, the Diamondbacks offense was largely missing, but did tie the game in the ninth - and might have done better, save for Gerardo Parra's second double-play of the game, which got him tossed. The agony was stretched out for a couple more innings, before the Phillies won it in 11, sending us to our seventh straight defeat. Details after the jump.

Before the game, a couple of points. With #51 unofficially retired by Arizona, Saunders picked #34 for his number with us, which seems to be to honor Nick Adenhart, the Angels player killed in a car accident by a drunk-driver. It's not the first time Saunders has done something like this - when picking their favorite memories of him, Halos Heaven picked as #1 the time in 2007 Saunders pitched while wearing a hat of his alma mater, Virginia Tech, after the massacre there. And thanks to the HH residents who popped in to follow his Arizona debut today: we seems to get on well with Angels fans for some reason (I recall the 25th-man ASG vote in 2009, when we traded bloc votes!).

It was a solid performance from Saunders. Nine hits over seven innings is a bit... well, "Haren-esque" might be the phrase, but only a couple of those were hard-hit. He also was not exactly helped by the defense: he had runners picked off a couple of times, but the defense were unable to complete the task. In addition, one of the two runs our new starter allowed came home as Gerardo Parra played a game of Bubble Bobble in left-field. All told, we'd take two runs over seven innings without any qualms at all - no walks and four strikeouts. The resulting Game Score of 57 was reached by Dan Haren only once over his last five starts for us. Small sample size, etc.

The Diamondbacks were kept off the board entirely for the first six innings, at the end of which they were 2-0 behind. After putting two on with one down in the first, they didn't get another man past first-base until Miguel Montero homered with one out in the seventh. We had a chance to add on, as singles by Stephen Drew and Mark Reynolds put men on the corners with one out, but Gerardo Parra hit into an inning-ending double-play. Arizona completed the come-back in the ninth. Justin Upton extended his hitting streak to 14 games with a lead-off double, went to third on an Adam LaRoche single, and came home on a high-chopper groundout by Montero, tying the game.

An intentional walk to Mark and an unintentional one to Drew loaded the bases with one out - again, for Parra, who between his fielding and hitting, had had a pretty-wretched day, but owned a coupon for redemption. Unfortunately, the Phillies refused to honor the voucher, Parra instead hitting into another double-play. Mark Grace, who had been giving us the "Good things happen when you put the ball in play" line minutes before on Montero's groundout, was strangely silent on this ball in play. A frustrated Parra spiked his helmet at having failed to beat the throw, and was tossed by the umpire, who may have thought the gesture was at him. Matt Williams and Kirk Gibson argued, to no avail.

Following all that excitement, the offense went back to normal, going down in order in the tenth. After Saunders had exited the game. Aaron Heilman provided two perfect innings of relief, and Esmerling Vasquez...didn't. However, having first loaded the bases in the bottom of the tenth, he struck out Ryan Howard on three straight pitches, to send the game to the eleventh frame. However, he couldn't dodge the bullet again, on the bottom half of another hitless inning by the Diamondbacks. He struck out the lead-off batter, but a walk came round to score on a pair of singles, and Arizona was swept for the second consecutive series. 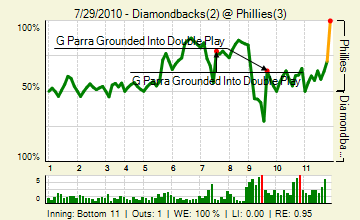 You may be wondering where Miguel Montero is - after all, he was the only Diamondback with two hits, also walked, and drove in both of our runs. However, one of his hits saw him thrown out at second, so that was a negative WP; his homer was +11.3%, but his groundout in the ninth was only +0.3%, the value of the run being almost canceled by it being the first out of the inning. The big plays there were Upton's double and LaRoche's single - plus of course, Parra's double-play. I don't think I have ever seen a position player with a bigger negative impact on the game than he did tonight.

"Amazing what can happen when you put the ball in play."
Offer not valid for the Arizona Diamondbacks

Onwards to New York - the Diamondbacks have just two chances left to capture a game, or they'll have managed the remarkable feat of having failed to win a single game on the road this month. Wonder when was the last time a team managed that?