Diamondbacks 1, Phillies 7: Domonic! Get to the Choppa!

Share All sharing options for: Diamondbacks 1, Phillies 7: Domonic! Get to the Choppa!

All right, so the team isn't leaving until after tomorrow's game (although one could argue they never showed up in Philly in the first place, given their performance in the first two games), and they'll probably be taking a plane and not a helicopter. Oh well.

In today's outing, the Diamondbacks ran smack into the immovable force known as Roy Halladay, and a much-heralded prospect licked his chops at the chance to make his debut against our abysmal pitching staff. The results were predictable, depressing, and nigh unwatchable. But someone had to document it, and as such, the Chronicles of Ridiculous continue after the jump...

Going over Arizona's offense in this game won't take long. They didn't get a runner past second until the seventh inning, and went down in order in five different frames (including the entire first time through the lineup). They only had one extra-base hit, an RBI double by Montero in the ninth that managed to break up the shutout when Halladay was just one out away. They drew no walks, although Ryal did manage to reach by getting plunked. In all, the Diamondbacks were decimated by Halladay, and he only needed 114 pitches to do it, striking out nine in the process.

Granted, there's not much shame being dominated by the best pitcher in the NL. Don't believe me? Check out the numbers, and you'll see why I have Halladay first on my non-existent Cy Young ballot right now despite two other pitchers having great years:

Nothing against the campaigns that Josh Johnson (A, 10-3) and Ubaldo Jimenez (C, 15-2) have put up so far, but Halladay has them crushed in just about every measure except the old win-loss record (11-8). Of course, the CY voters love wins, so Ubaldo might already have the thing locked up. Still, Halladay's outing against us today was just the latest in a masterful season.

The Phillies got to Edwin Jackson early and often, tagging him for five runs in five innings. It was Edwin's fifth straight outing where he failed to get through the seventh inning, something he was doing at a 56% clip before his infamous 149-pitch no-hitter. Small sample sizes apply, but it's worth keeping an eye on going forward. Jackson gave up eight hits and two walks in that span, throwing 104 pitches and striking out just three. And all of the damage done by Philadelphia's offense came without any help by Ryan Howard, who went 0-for-4 with four strikeouts. Wunderkid Domonic Brown helped with that, going 2-for-3 in his big-league debut with an RBI double and a sac fly in the process.

Sam Demel gave up a pair of runs in his two innings, raising his ERA to almost 5. The only bright spot among pitchers was Juan Gutierrez, who pitched a scoreless eighth.

And that was that. 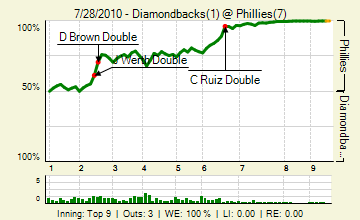 Yes, you read that correctly: Juan Gutierrez was the only player who avoided being in the negative, but because the game was essentially out of reach by that point, he couldn't even muster a positive score. Sums up the game pretty well.

Just one green comment tonight, so it gets the automatic bid for Comment of the Night, because I don't feel like looking for any other gems:

Translation 101 from the Booth
Gracie: "Hisanori Takahashi, what does that translate to?" Daron: "Well, if you read the NY Daily News religiously, it translates to: We Need A Better Starting Pitcher."
by Rockkstarr12  on   Jul 28, 2010 5:41 PM MST

Tomorrow, Arizona will try to avoid the sweep, sending new acquisition Joe Saunders to the mound to take on Kyle Kendrick, who had a strong outing last time out against Colorado (7 IP, 1 ER). Unfortunately, we seem to have caught Philly at a time when their offense is performing back at its normal level, so it might not be the best situation in which to make a good first impression. Another 4 p.m. start on that one.

The only good news from tonight: The Pirates won! We're only a half game back from the worst record in the NL, although we're a game up in the win column (it's weird to talk about that instead of the loss column). So there's that.