Oh, Diamondbacks.  Somedays, you make it very, very, very hard to be a fan.  I assure you- today was one of these days.  A day when the offense managed to put together a fair number of hits, but couldn't do what it needed to bring the runs in to score.  A day when we had the chance to mark up a win against the ace of one of our division rivals, but couldn't manage to get it finished.  A day when a relatively unheralded rookie went out and pitched some good innings, working out of trouble against the team leading the Wild Card chase, but we couldn't support him to a W.  A day when our team ace got sent away.

Earlier in the season, we coined the term "baseball-induced ennui", and if there was ever a day for that, this was it.  If you're foolish enough to want to know more, or you're just my mom, you can read all the unfortunate, disappointing details, after the jump.

Okay, we'll start off with the good news.  Barry Enright.  Raise your hand if you'd heard much about this kid before Spring Training.  Enright went out today and continued to do what he's done since we called him up- pitch, and pitch fairly well.  He didn't have any 1-2-3 innings, giving up 8 hits over 6 innings, but he showed some nice moves to work out of trouble, particularly in the second when he worked around a leadoff double by Pat Burrell, and in the third and sixth innings, where he made sure leadoff walks didn't come around to score.  Two runs in six innings isn't a bad outing.  The bullpen followed up with some solid work, too.  Blaine Boyer, Aaron Heilman, and Juan Gutierrez, a trio that might inspire some concern and ulcers, came in to pitch three good innings to close out regulation, with only one hit allowed by Heilman.

On the other side of the field, how did the offense look?  Well, we got a fair number of hits.  Our nine hits off Tim Lincecum today is our best outing against him, and ties for the most hits he's given up in a game this season, with his start against the Rockies earlier this month.  However, once we got runners on base, we found there wasn't much we could do about it.  The only exception to this rule?  Again: Barry Enright.  Yes, our hard-pitching, hard-hitting, hard-working, hard-drinking* pitcher-slugger was the only DBacks hitter to solve the Lincecum Scenario, hammering a double to center with two on in the second, to give the team a 2-1 lead.  Other than that, our offense was pretty unimpressive.  No, I'll upgrade that to full disappointing.  Let's just consider how we did:

Sprinkle in 1-2-3 innings in the fourth and tenth innings, and that's a pretty impressive spree of offensive incompetence.  We managed to strand eight runners across ten innings.  That's not going to win many games.

By the time we reached extra innings, it pretty much seemed like the game was over.  We'd stranded runners on third in the last two innings, our spirits were already battered on news of the Haren trade, and- well, it's not like extra innings seem to work in our favor often anyway.  As it was, no one seemed too surprised to see Esmerling Vasquez give up a leadoff double, and even watching Miguel Montero gun down a stolen base attempt didn't get the spirits up too much- which was good, since it was followed pretty much immediately by an RBI single that gave the Giants the lead and, after our offense collapsed 1-2-3, the win.

So.  A rough game.  As many of them seem to be nowadays.

Audio clippage from Barry Enright, Justin Upton and Kirk Gibson regarding the game. 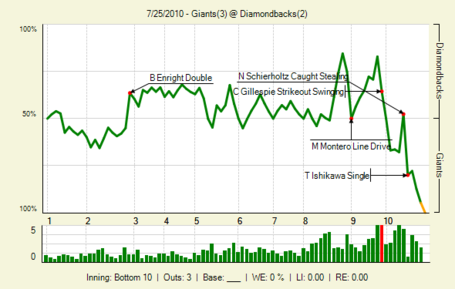 Hero of the Day: Barry Enright (at-bat) +21.9%.
Also Cool: Juan Gutierrez +15%, Barry Enright (pitching) +14.8%
Waste of Base Elements: Miguel Montero -34.7%
As always, the graph shows truth.  Barry Enright is awesome enough to take first and third in the rankings.
A fairly active GDT today, hitting north of 850- if you look at the graph of the comments by time, you can pick out the spike when they announced the trade.  justin1985 took first in comments, with jdub220 taking second and Torpedosneak snuck in for third.  Also giving their input to the process were venomfan, kishi, Clefo, NASCARbernet, pygalgia, Rockkstarr12, Jim McLennan, 4 Corners Fan, emilylovesthedbacks, hotclaws, GuruB, Jack Cromwell, soco, mrssoco, Cardscrazy247, morineko, BigPapaKishi, blank_38, SeanMillerSavior, BattleMoses, StinkyFingers, and AJforAZ.  Comment of the day was chosen the very moment I read it- fortunately, the populace had enough taste to agree with my unspoken edict, so I award emilylovesthedbacks for typing what we were all thinking:

you just ruined my day.

No love,
Everyone who liked Dan Haren.

And so we leave town after getting swept by the Giants, just as we swept the Mets.  Obviously, the Diamondbacks don't care much for Newton's Second Law.  We're off to Philadelphia next, to face off against a Phillies team that's just won four straight and is possibly annoyed that we didn't give them Haren.  Either way, I'm sure that'll be fun.