Any hope that the Mets series signaled a renaissance for the Arizona Diamondbacks have been snuffed out like a 99-cent candle in three games against the San Francisco Giants. We have been mercilessly taken apart, with the shortcoming in our offense, defense and bullpen ruthlessly exposed and turned against us. We need to beat the reigning Cy Young winner tomorrow to avoid a four-game sweep - on the evidence of the series so far, with Arizona having been outscored 20-8, that doesn't seem likely to happen.

Credit bullpen suckage, in the main, for extinguishing any faint hopes of the team pulling out a comeback. The score was only 3-1 when Ian Kennedy was pulled, with two outs in the seventh inning. I'll bet you manager Kirk Gibson is second-guessing himself for not giving our starter the chance to finish things off, because by the time Jordan Norberto failed, and then Sam Demel eventually succeeded in getting the third out, the Giants were 7-1 up and cruising. Kennedy's last action was to walk a batter, and LOOGY Norberto failed to do his job, allowing a hit. Replaced by Demel, a walk loaded the bases and Juan Uribe delivered a grand-slam to left-center.

About the only positive thing to come from that was the string of pithy responses which followed in reply to NASCARbernet's enquiry "Okay, and what's on TV tonight?" I recommend checking out the entire stream, but my personal favorites among the titles suggested: Masterless and Commandless, The Sweeps of San Francisco, You Only Score Twice and The Hunt for Any October. As the season continues to go to hell in a hand-basket, it's comforting to see our sense of morbid, self-deprecating humor remains intact.

Personally, I'm just hoping they send Yellow Wiggle in to pitch at some point tomorrow, for he could hardly do any worst than our relievers this evening. Between them, Norberto, Demel and the ever-reliable (and I don't mean that in a good way) Chad Qualls, combined to retire three of eleven batters faced - one of those on a sacrifice bunt. In their one inning of work, they allowed five hits, three walks and six earned runs. Which makes Kennedy's mediocre line - four runs on six hits and three walks in 6.2 innings, while fanning six - look positively stellar. Aaron Heilman restored order by getting the final four outs.

The offense wasn't much better, striking out 11 times - that's 51 in the past four games - and managing only six hits. Chris Young had two of those, and also walked, while Chris Snyder snagged a couple of walks' Mark Reynolds hit his 23rd home-run of the season (he's on pace for 38 this year) and walked. Justin Upton singled, extending his hitting streak to eleven games, the longest by a Diamondback this season. Stephen Drew scored Arizona's second run, doubling to lead off the seventh and coming home on a Tony Abreu sacrifice-fly. And Adam LaRoche homered, a meaningless two-run shot in the eighth that was worth a massive... er, 0.4% on our Win Probability.

Not much more to add. Hopes of a quick game were dashed as things ground to a half in the seventh and eighth inning. That's three hours of my life I'll not get back. Eugenio Velez got cracked in the head by a foul-ball which lasered straight into the Giants dugout off the bat of Pat Burrell. He ended up being taken to hospital on a stretcher, but things are looking promising, which is a relief. As I noted in the thread, far more people are hurt by foul balls coming out of the playing-area than by shattered maple bats, ywt no-one is demanding action to prevent the former from happening.

Snyder was mic'd up as part of Catcher's Weekend - I've a feeling Fox Sports Arizona were begging Krik Gibson to start Miguel Montero, who would probably have provided some better soundbites than Chris Snyder. While there's no-one on the team I'd want to have my back in a fight than Snyder, he's not exactly Joe Garagiola Sr. when it comes to unleasing amusing anecdotes. Still, a delight as always to hear Joe, describing how he had to catch two-handed, and his response when asked by Daron Sutton how many of his fingers had been broken: "Let's see - how many have I got?" Dammit, I hope I'm half as sharp as Joe when I'm 84. 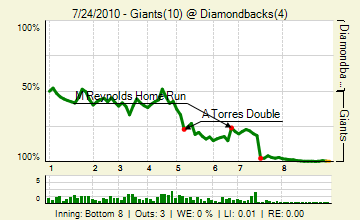 The movie-title game proved a successful exercise in comment-padding, getting us up above three hundred when it otherwise wouldn't have happened. Only fourteen people commented in the thread, which indicates just how much most people care about the team: casual fans? Who needs 'em? NASCARbernet came top, with hotclaws and BigPapaKishi, rounding out the top three. Also present: Jim McLennan, Clefo, Rockkstarr12, emilylovesthedbacks, snakecharmer, Dallas D'Back Fan, 4 Corners Fan, kishi, Jack Cromwell, Cory Williams and Azreous. Comment of the night goes to NASCARbernet for a stirring re-enactment:

Behind the Scenes with catchers

Here are the behind the scenes catcher comments just for you:
"Ow"
"Owie"
"OWWWW!!!!"

Funnily enough, that's what much of the game felt like for Arizona fans too: a bit like getting stabbed in the face with a pen, as happened to some poor bastard at Comic-Con today. Only at Comic-Con. Back tomorrow as we try to avoid the sweep. Yeah, good luck with that. Thank heavens I'm not recapping it, as I'll be tallying up the results of the "Who do we hate?" poll. Some self-loathing might well be in order.