Kelly Johnson hit for the cycle tonight. He homered in the first, doubled in the fifth, tripled in the sixth, and completed it by singling in the eighth - the fourth Arizona Diamondback in franchise history to do so. However, it wasn't enough for the team, as we were doomed, courtesy of a couple of throwing errors on consecutive batters by Edwin Jackson some horribly wasted chances to score runs - we left 14 men on base, Mark Reynolds going 0-for-4 and stranding eight men personally. Johnson became only the fourth National League player since 1999 to hit for the cycle and see his team lose on the same night. An appropriate summary of the season as a whole, probably.

The bottom of the fifth inning was one of the most agonizing it has been my misfortune to watch, in a season of painful memories for Arizona fans. Chris Young walked, and Kelly Johnson rifled a double, which would have scored Young, except it bounced into the stands. Second and third, nobody out. How can we possibly fail to score! Oh, I forgot - this is your 2010 Diamondbacks. Justin Upton popped up on the infield, and after Adam LaRoche walked, Mark Reynolds and Rusty Ryal both struck out swinging on full counts (and Ryal, at ball four). Sure, they both had extended at-bats - 8 and 11 pitches respectively - but the end result was the same. A big, fat zero.

That wasn't the only time the offense - or, indeed, Reynolds and Ryal - failed to come through with runners in scoring position. In the first, Johnson's 16th home-run of the season tied the score at one, and we looked to add on, as an Upton walk and LaRoche double put men on second and third with one out. But Reynolds went down swinging - one of 14 K's on the night - and Ryal grounded out. More fail? Oh, if you must. In the sixth, the first two reached against the Giants bullpen. But Jackson couldn't get the bunt down, and Stephen Drew failed to advance on a ball the squirted away from the catcher, so Young's out was a fielder's choice, not an RBI groundout.

But then, Kelly Johnson happened, again. He tied the game by driving the ball into the left-center gap - his third hit of the night, and the fourth time on base, and LaRoche then gave Arizona the lead with a single to left. It didn't last. For then, unfortunately, Edwin Jackson happened. After allowing a leadoff single, he made two successive fielding errors on sacrifice bunts by Giants hitters, allowing the runner came all the way around to score. The two trail runners - the ones who only reached base thanks to Jackson's fielding ineptitude - then came home on a triple, and the Giants were back on top by two runs once more, without an out being recorded.

A walk ended Jackson's night. What had looked like a solid, quality start before the start of the seventh inning, melted down completely: his final line of eight hits and two walks in six innings, resulted in four earned runs, but it was the two unearned ones, on his own errors, which really hurt. It would have been worse still, except for an excellent relief outing by Jordan Norberto. He came in with men on the corners and nobody out, but struck out the #3 and #4 hitters in the San Francisco order, and got a ground-out to strand the runners where they were. Good to see him dealing with right-handed hitters like Pablo the Buffet Slayer.

Upton walked twice, but his single in the third gave him a 10-game hitting streak. That's only the second such streak to reach double-digits by a Diamondback this season - the first was Johnson's ten-game sequence, running from June 4-13. There have been 27 longer runs in the National League during 2010, just none by anyone in Arizona. LaRoche had a pair of hits and two walks, Stephen Drew a hit and a walk, and of course, there was Johnson, who came up to lead of the eighth, needing a single to complete the cycle, and promptly rifled a pitch to right-field. Here are all the Arizona players to perform the feat

Any hope we might have had of a comeback faltered when Upton immediately hit into a double-play, and his copy-book was further blotted when he misplayed a fly-ball in the top of the ninth, letting it sail over his head for a leadoff double. That run eventually came around to score, giving the Giants' closer a nice, easy, three-run lead to deal with in the bottom of the inning. After a Rusty Ryal single provoked some marginal potential, the next three went down in order, Miguel Montero staring at strike three. We're back within one defeat of me being forced to open up the Tankapalooza standings again, folks... 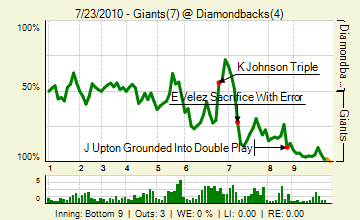 Anyone remember the last time we had a hitter at +57% in a game we lost? Me neither. Just over 300 in the comments, with a hotly-contested race at the top. Hotclaws just pipped newcomer Jack Cromwell (welcome!) and myself, but only three posts covered the leading trio. Also present: Rockkstarr12, 4 Corners Fan, pygalgia, Clefo, AJforAZ, Jdub220, BigPapaKishi, luckycc, emilylovesthedbacks, Sprankton, NASCARbernet, katers, Azreous, Skii, brian custer and kishi. The only green comment was initially one of mine, but I found one I could rec and turn green, so Comment of the Night goes to luckycc:

What is it about being on the front of a jersey

That makes ’San Fransisco" look like it has way too many letters? The only thing that could possibly be longer would be playing for the Eyjafjallajökull Ash Clouds.

I'll see you tomorrow for what looks likely to be Harenrumorpalooza 2010....