Somebody forgot to tell the Diamondbacks that, just because there were two 7th-inning stretches the night before, does not mean you don't have to play the next day. The offense that was faint last night was even dimmer tonight. Rodrigo Lopez only gave up five hits in seven innings of work, but that wasn't good enough. Matt Cain kept the Diamondbacks swinging and missing and off of the basepaths, and the Diamondbacks' win streak is stopped at 3 games.

The Giants wasted no time in taking advantage of the Diamondbacks' collective lethargy. With two outs in the 1st inning, Lopez walked Aubrey Huff. Huff promptly stole second base and scored on a single from Buster Posey, who now has a 16-game hitting streak. Andres Torres hit a solo home run in the 3rd inning to put the Giants ahead 2-0. They would add their third run in the 7th via a Juan Uribe double, sacrifice fly, and single over the drawn-in infield.

Rodrigo Lopez needed 32 pitches to get out of the 1st inning, but lasted through the 7th giving up only 5 hits and 1 walk, striking out 7 Giants. This was a solid outing for Lopez, and for Chad Qualls who pitched two scoreless innings, but the team could not provide any semblance of this thing called "run support."

The Diamondbacks' only real threat came in the bottom half of the 1st inning. Chris Young had leadoff single and stolen base, and Upton was aboard with a 1-out walk, but Miguel Montero and Mark Reynolds left the baserunners there. Upton led off the 4th inning with a ground rule double to the pool to extend his season-high hitting streak to 9 games, but he was easily caught stealing third. Justin Upton (walk) and Stephen Drew (strikeout/wild pitch) both reached with two outs in the 6th and 7th innings, and Cole Gillespie led of the 8th inning with a single, but that's as far as they got. The Diamondbacks went quietly against closer Brian Wilson for a 1-2-3 9th inning, and the game was over.

This was Matt Cain's second dominating performance against Arizona this season. He threw a one-hitter in San Francisco back in May. He struck out 9 Diamondbacks tonight, including Mark Reynolds twice for his 134th and 135th strikeouts of the season. Whatever momentum the Diamondbacks had from a sweep last night was completely crushed by the Giants tonight. Here's audio after the game from Gibson, Upton and Lopez 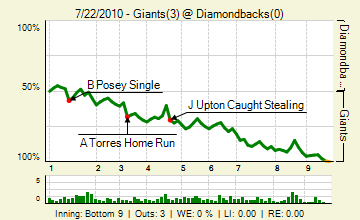 As much as I would like to give myself Comment of the Night for my AZ Snakepit Recap Schedule Flow Chart (hey, it got the same number of recs!), instead it goes to Azreous, comparing the Diamondbacks to zombies:

I expect we'll see the return of the Tankapalooza table tomorrow night. Pittsburgh and Baltimore have already lost, but as I type, Seattle is in the middle of mounting a 9th-inning comeback against Boston and are now in extra innings.