Share All sharing options for: Diamondbacks 4, Mets 3 (14): Extras! Extras! Read all about it!

Forget about Tankapalooza. Despite a lethargic offense most of the night, punctuated only by quick bursts and solo home runs, the Diamondbacks pulled out a 14-inning nail-biter against the Mets on Wednesday night. The marathon game lasted almost five hours, but Arizona earned their first sweep since last season (a two-game set against the Giants in May notwithstanding) thanks to Chris Snyder's one-out double to win it.

More details after the jump...

The Diamondbacks scored all of their runs in the early innings thanks to solo home runs. Chris Young tied the game at one in the first by crushing a pitch to left, Rusty Ryal hit a solo shot in the second that just cleared the left-field wall, and Mark Reynolds launched a bomb 25 rows deep into right-center in the fourth. The Mets' offense wasn't much better, getting just two solo homers and an RBI single in the first six innings before going stone cold the rest of the way.

Dan Haren gave Arizona a quality start, though he left with a no decision long before the game ended. He gave up three earned runs on six hits and two walks in six innings, striking out eight. He was 0-for-2 at the plate, however, lowering his average to a paltry .364. The D-backs bullpen was solid in their seven innings of work, giving up just one hit and three innings and striking out eight. Esmerling Vasquez, Aaron Heilman, Juan Gutierrez, Sam Demel all chipped in, and Blaine Boyer pitched the final two innings to get the win. Here's Gibson's comments after the game. 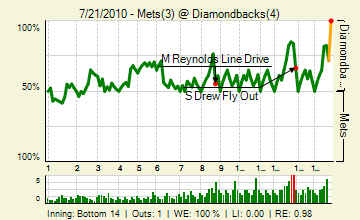 The Fangraph seems to reflect the back-and-forth (yet unmoving) nature of the seventh through 13th pretty well. Games like this generally provide a ton of winners and losers, and as you can see, this was no exception. It also seems to recognize that our pitchers (none in the negative) were far better than our hitters (see above) on this night.

As Jim pointed out in the GDT, it was just the 10th time in the past 90 years that both teams managed to strike out 16 times. Of course, our team's strikeout exploits are well-known by this point, so I suppose it isn't all that shocking.

Finally, a Comment of the Night that sums things up pretty well:

"It’s a battle of who wants it more."

Do they realize it’s the Diamondbacks and Mets here?