Mets 2, Diamondbacks 3 - Baseball Has Been Barry Good To Us

Share All sharing options for: Mets 2, Diamondbacks 3 - Baseball Has Been Barry Good To Us

The Diamondbacks enjoyed home cooking last night, striking first against the Mets for a total of 12 runs. It would have been nice if the team had saved a few of those runs for a little more insurance tonight, but what would a Diamondbacks win be if it weren't Guti-wrenching? Barry Enright kept most of the Mets off the basepaths in his 8 solid innings of work, and Juan Gutierrez got his third save of the season to start the Diamondbacks on their first winning streak of The Gibson Era.

Enright was shaky in the top of the first inning. Two quick singles from Jose Reyes and Angel Pagan, then a walk to Carlos Beltran loaded the bases with one out. Rookie Ike Davis and Jason Bay both struck out swinging to end the Mets' only major scoring opportunity.

By the time the Mets got their next base runner, the Diamondbacks had scored their 3 runs for the evening. Enright was unable to help himself with the bases loaded in the 2nd inning, but he would later redeem himself. Justin Upton homered the next inning to just above the line in right-center field to put Arizona up 1-0. In the 4th inning, the Diamondbacks added two more. With two outs and the bases empty, Chris Snyder walked. Gerardo "RBI Machine" Parra launched a triple over the head of the center fielder Beltran, chasing Snyder home. Then Enright hit a soft ground ball to third, ran it out, and was safe for his first major league hit and RBI. Manager Kirk Gibson said on the post-game show that normally he doesn't like his pitchers to run at more than 80% power, but it's a good thing Enright considers himself a real ball player because that third run ended up being the game winner.

After that first inning, Enright retired 14 straight batters. This is apparently "tied for fourth most among Diamondbacks rookie pitchers." That actually doesn't sound impressive, but it was an impressive outing. Five of those 14 outs were strikeouts, four of them swinging. Enright allowed singles in the 6th and 7th innings, but that was merely to set up the double play. His only run of the night came on a solo home run, just beyond Upton's leaping reach, by Josh Thole (his first major league home run) to lead off the 8th inning, but he settled down to retire the next three Mets. Final line: 8 innings, 96 pitches, 5 hits, 1 earned run, 1 walk, 8 strikeouts. Not bad, kid; you do not have to get up very early tomorrow.

For his first ever save opportunity as manager, Kirk Gibson decided to hand the ball over to Juan Gutierrez. While recent performances would probably show this was his best option, fans' stomachs would disagree with this choice. Now, I had decided not to say, "A solo home run isn't as dangerous as a 2- or 3-run home run" because I figured as soon as I'd say it, it would happen. And four pitches later, I was right - Pagan had hit a solo home run to the right field bleachers. David Wright followed with a fly to left, but this one was caught by Parra before the warning track. Beltran and Davis both struck out looking to end the game, save win #2 for Enright, and start Gibson's first managerial winning streak. 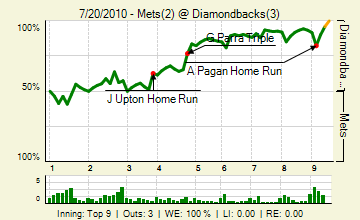 Comment of the Night goes to the overwhelming sentiments tonight towards our humble leader Jim and his lovely wife on their anniversary:

Many congrats to Jim and MrsSnakepit

As the title also shows, baseball has been very good to the two of them, for Jim may not have proposed had the Diamondbacks not won that fantastic Game 7. (Although I kind of doubt that.) Honorary Second Place Comment of the Night goes to Azreous:

the Pirates won too. We didn't lose any ground by winning.