Diamondbacks 13, Mets 2: Bats in the Pelfrey

Share All sharing options for: Diamondbacks 13, Mets 2: Bats in the Pelfrey

Always a good sign when the opposition pitcher gets the ball taken away by the manager after retiring only four of our batters. And so was the case tonight, with Mike Pelfrey throwing 51 pitches in the first innings - the second-most in the National League this year. The Diamondbacks' offense thoroughly enjoyed his time on the mound, swatting him about to the tune of 7-for-11 with a pair of walks, allowing Arizona to romp out to tacos and a six-run lead by the end of the second frame. 93% Win Probability? Don't mind if we do.

Details of this after the jump. And no Millagraph needed. I'm slightly disappointed, but will cope, somehow.

It was particularly nice to see the Diamondbacks score by stringing together hits, rather than waiting for the homer. They almost did get one of those, Mark Reynolds crushing the ball high off the wall in center-field, about four feet below the home-run line. But those first six runs came as the result of at-bats from six different Arizona batters: Kelly Johnson double, Miguel Montero fielder's choice, Reynolds' triple, Gerardo Parra single, Justin Upton double and LaRoche single. That's the kind of offensive potential you want to see from a line-up, with everyone capable of contributing, from top to bottom.

After the departure of Pelfrey, the Arizona offense went quiet for a while, and one wondered whether New York were going to be able to climb back into it. They had men in scoring position during the third, fourth and fifth innings, but only scored on run, with Ian Kennedy working out of potentially sticky situations. His night ended after getting Carlos Beltran to fly out harmlessly with two men on, ending the fifth. It was quite a quick hook - he had only thrown 87 pitches, but Steve Gilbert had reported the team will be limited his workload in the second-half. On that basis, letting him qualify for the win, with one run in five innings on four hits and two walks, then lifting him, makes sense.

The Diamondbacks poured on again in the sixth inning, adding five more runs to put things beyond any realistic hope of the Mets, and hitting for the cycle in the frame. Upton tripled in Chris Young, Montero doubled in Upton, and after a LaRoche single, Reynolds swatted his 21st home-run of the season, a three-run shot - he drove in four runs on the night, giving him sixty for the year. Two more were scored in the eighth, on four hits and a walk, to complete the scoring for the home team - only a run scored by the Mets with two outs in the ninth stopped us from tying the biggest margin of the season (13-1 against the Giants on May 19th).

All told, Arizona managed 18 hits - that was easily a season-high, beating the previous mark of 15, set on three separate occasions. Reynolds finished a double short of the cycle, while Young, Montero and LaRoche had three apiece; Upton had two and a walk, while Parra had a pair of knocks. Good to see the K:BB ratio for the team also healthy, at 6:5. The 23 baserunners also tied a season-high, done previously against the Cardinals on April 20th, when the Diamondbacks had 15 hits, seven walks and a hit batter.

The bullpen were generally solid. Blaine Boyer took only 20 pitches to get through the sixth and seventh innings, and Sam Demel delivered a scoreless eighth. Chad Qualls was brought in for mop-up in the ninth, and allowed his usual run, to keep his ERA up there at 8.35. But that was barely a typo in the beautiful sonnet which was this evening's Arizona performance. Where have they been the previous 92 games? Of course, you may remember the similar pounding inflicted on the Dodgers in Gibson's first game... Still, at least we damaged the Mets pen, with three of their relievers being forced to throw 35+ pitches. And, look! A proper Fangraph! 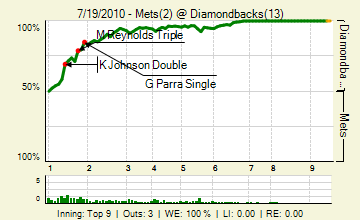 Comment of the night is probably in the spirit of innocent overshare - much like the lady whom the cameras caught flashing her underwear at a guy - presumably, or at least, hopefully, her other half - after he caught a foul-ball. I suspect that probably led, as I noted in the comments to heavy use of the mute button in the commentary box. So CotN goes to mrssoco

(who by the way, isn’t my boyfriend. I like my boyfriends single and a little sinful or I feel dirty.)