And the Gibson era begins: Independence Weekend at Chase

Share All sharing options for: And the Gibson era begins: Independence Weekend at Chase

Trust we all had a nice, restful off-day yesterday; relaxing and enjoying the peace and tranquility of a day when nothing much happened.

Anyway, enough of the past: we now get to see what the new administration brings to the table - I'm putting the over/under on the first call for his firing on azcentral.com as 45 minutes into tonight's game. It's going to be an interesting holiday weekend at the ballpark, as the hated boys in blue show up for a series of three games. After the jump, we'll take a look at what to expect, what else is going on at Chase Field, and how you can see the games for free (albeit perhaps at the cost of your cholesterol level).

Hell Month finishes, Arizona having posted a 11-16 record. Not brilliant, but it could have been worse e.g. like May was, when we lost twenty games. Still, with June out of the way, we now head into July, and finally get to face some losing teams, right? Sorry, not quite yet. Before facing the soft Cubbie underbelly of the schedule, we first have to get through the Dodgers. That will run our streak of games against teams currently possessing winning records to 42 consecutive contests. There's tough schedules, insanely tough schedules, and then there's what Arizona has had to get through for more than half the season - Baseball-Reference.com has us as having the hardest schedule in the NL

The crowds will be out in force on Friday night to make fun of a bizarre-looking dude with an oversized, arfificial head as he wheezes his way around the outfield. But enough about Manny Ramirez. There will also be the debut of the D-backs Legends Race, in which ten-foot tall versions of Randy Johnson (so, "life-size" then?), Luis Gonzalez, Mark Grace and Matt Williams will race from the back of right field around the warning track.

I must admit, I'm kinda still out on this. It does smack a bit of what Juvenal called "bread and circuses" - would this have been introduced had we been competing for the pennant, rather than 15 games back before the end of June? But it has the potential to be amusing, and every tradition has to start somewhere. Oh, and in case you were wondering, sponsors Henkel are the German company that owns such brands as Persil, Loctite and Dial.

Let's just hope that the games themselves prove to be at least as competitive as the mascot races. Friday will be Edwin Jackson's first appearance since his no-hitter and Tampa, so I trust he will get a warm reaction from the crowd for his third straight start against a team that used to employ him. As noted already, curious to see how his 149-pitch outing affects him, though he has been given a couple of extra days off to recover. He'll face another Hiroki Kuroda, who beat the Diamondbacks back on May 12, but has been a bit up and down since, with a 3.88 ERA in eight starts.

The Dodgers are off a three-game sweep of the Giants, which set them back on track after a spell where they lost eight of ten. However, the status of our least favorite dreadlocked animal this side of the Predator, remains uncertain: Manny had an MRI here in Arizona today on his balky hamstring, which showed "some inflammation", but it appears that Los Angeles is going to try and get away without actually putting him on the DL: whether he plays or not this weekend, remains to be seen. Factoid to ponder: Los Angeles are now 21-5 against the rest of the NL West this season, including 8-1 against Arizona. Hopefully, we can push back a bit between now and Sunday.

With it being Independence Day weekend, there's attention being paid to the armed forces, culminating in Military Appreciation Day on Sunday. Major JAG officer for the Air Force, Jeff Scoular, will throw out the first pitch, and Arizona Army National Guard Chief Warrant Officer 2, Mark Head, will sing the national anthem that day.  Active or veteran military members can present ID at the Chase Field ticket office all weekend to get half-price on most seats. The rest of us will just have to get a free upper-level ticket for the series, by buying $10 of milk, cheese or yogurt at Fry's and taking the receipt to the Chase Field ticket office. The lactose-intolerant will just have to watch it on TV.

Fox Sports Arizona will also be doing their part, with their 4th annual "This One's For You" telecast. During the coverage, members of the Arizona Army National Guard's 2nd Battalion 285th Assault Helicopter Regiment, currently stationed in Iraq will be able to talk to loved ones back home in Arizona, and the game will also be shown around the world via the American Forces Network - fingers crossed it goes as well as our nationally-televised thrashing of the Yankees. Fox Sports Arizona is also asking its viewers to submit their messages of support for the troops that will be shown throughout the telecast, and these can be sent by e-mail to aztroops@gmail.com.

Hope you all have a safe, enjoyable holiday weekend! 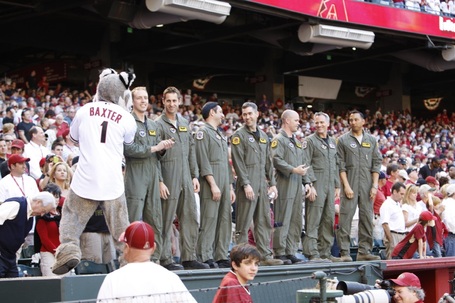 Dear Military, Any chance you can get Baxter classified as an enemy combatant?
Love, AZ SnakePit