Diamondbacks 4, Padres 6: A Good Kick to the Gut

Share All sharing options for: Diamondbacks 4, Padres 6: A Good Kick to the Gut

When the howling denizens of AZ Central asked for more "fight" from the Diamondbacks, this afternoon brief tickle-match was probably not high on their list of desired outcomes. Of course, no one, except for those that delight in the misfortunes of others, would desire the Diamondbacks being swept to start the second half of the season, but that’s what happened.

It all seemed so innocent, and fun, in the beginning. Although no series win was possible without the aid of a wormhole opening underneath Petco Park, there was still a bid for respectability on the line. In true Diamondback fashion, though, the Boys in Sedona Red scoffed at this opportunity.

Chris Young led the game off with a single to left. Kelly Johnson stepped up, was shown a couple pitches, and then promptly launched a home run past the right field fence. The Diamondbacks had earned themselves a 2 run lead, and no one was even out. Upton wasted no time in lining out to left, and after a Miguel Montero walk, both LaRoche and Reynolds struck out to the inning.

The Padres didn’t waste much time in striking back, and halved Arizona’s lead in the bottom of the second off a Chris Denorfia home run, his first of two solo home runs for the game. They couldn’t get anymore runs, though, and Edwin Jackson escaped with limited damage.

The home club would tie it up in the bottom of the next frame, though, and this would be the beginning of the long slide to another loss for the Diamondbacks. Adrian Gonzalez singled home Jerry Hairston, who had been standing on second. They would take the lead the next inning after paper cutting Jackson to death with a singles by Stairs and Denorfia. Jackson then struck the killing blow with a wild pitch, and Stairs scampered in for a Padres lead.

Jerry Hairston would end up flying out to center on the next pitch, but the damage was done. From this point on the Diamondbacks were playing catch-up. There was a glimpse of hope in the top of the next inning when Upton hit a bomb to direct center to tie the game up.

The Padres were able to create some permanent separation in the bottom of the sixth, when Everth Cabrera tripled in Denorfia. What happened next is still a bit baffling: Cabrera was caught leaning over at third, and Montero quickly found Reynold’s glove for the out. When Mark lunged at Cabrera to make the out, though, they somehow ended up in a scrum that resulted in Mark getting kicked in the stomach, Everth kicked out of the game, and both teams participating in a bench-clearing, stand-around-and-look-angry showdown. Though Cabrera certainly comes off looking like a punk from this, he and the Padres got the last laugh. 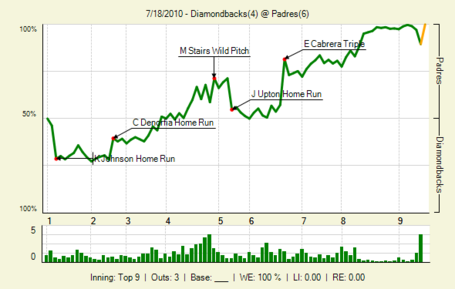 No, it wasn't 'Skins writing this recap.  I just plain forgot to answer the call today, so apologies for a late recap!  Just over 800 comments in the GDT, with the Real 'Skins playing Master of Ceremonies with over 200 comments.  He was joined by the rest of his merry B-Boys: Skii, justin1985, Jim McLennan, NASCARbernet, unnamedDBacksfan, kishi, Clefo, BattleMoses, Rockkstarr12, Dallas D'Back Fan, snakecharmer, 4 Corners Fan, emilylovesthedbacks, pygalgia, hotclaws, marionette, jinnah, brian custer, Jdub220, blank_38, Counsellmember

The Diamondbacks head back home tomorrow for a series against the Mets.  First pitch is 6:40pm, so be here or be...not here?