Diamondbacks 0, Marlins 2: Rush To The Break

Share All sharing options for: Diamondbacks 0, Marlins 2: Rush To The Break

It's appropriate that Daron Sutton starting thanking the team's sponsors while there was still one out to go in the ninth inning, for the DIamondbacks offense played as if they had some planes to catch - and, with a four-day break coming up, most of them probably did. The Marlins were apparently similarly inclined, with the teams whizzing through this game in not much more than two hours forty minutes, and scoring only two runs between them.

Unfortunately, both of those were for Florida, as Arizona wasted a couple of golden scoring opportunities, and were shut out for the seventh time this season. The loss means they end the first part of the season on a down note, though still get a split of the four-game series against the Marlins. Details after the jump.

Let's start by covering the two most blatantly-wasted scoring chances, which came in the bottom halves of the first and fourth innings. Chris Young got our hitters under way with a walk, then stole second, and reached third on a singly by Kelly Johnson, to give the Diamondbacks runners on the corners with nobody out, and our #3-4-5 hitters coming to the plate. However, Justin Upton popped out to the shortstop, Miguel Montero flew out weakly to shallow right-center, and Mark Reynolds went down swinging - one of three for Special K on the day and eight for the Diamondbacks on the day (a little below their average of 9.2 strikeouts per game, coming into today). Inning over, zero runs scored.

The fourth turned out to be no more productive. Three singles loaded the bases for Arizona with only one out, but Rusty Ryal grounded into a tailor-made double-play - one of three hit into by the Diamondbacks this afternoon - and, again, we failed to score. The offense didn't get anyone into scoring position the rest of the game, and we sent only two batters over the minimum to the plate while the final seventeen outs were recorded by the Marlins. The problem wasn't the top of the order, with Young, Johnson and Upton each getting two hits, and combining to go 6-for-10 with both our walks and zero K's. It was the rest of the lineup, who went 2-for-23 with no walks and eight K's.

Barry Enright had a solid outing overall, allowing two runs on four hits and a walk in his five innings of work. As last night with Kennedy, Gibson seemed to have a quick hook, replacing Enright with a pinch-hitter in the bottom of the fifth, even though he had only thrown 76 pitches to that point, and had struck out the last two batters he had faced, part of a 1-2-3 inning, so hardly appeared to be struggling. His only struggle was the fourth inning, where the Marlins led off by going single, RBI double, RBI single, to jump ahead 2-0. That was all the offense they would need, and in light of the AWOL offense, was enough to tag Enright with the second loss of his career.

Both the Florida and Arizona bullpens were solid. Blaine Boyer, Sam Demel and Juan Gutierrez faced the minimum dozen batters over four innings after Enright was lifted. Boyer allowed the only base-runner, then got him erased on a double-play, while Demel retired all six batters face in two innings, and Gutierrez added a scoreless ninth. However, we managed almost as little off the Marlins' relief corps: three hits, all singles, and a walk in 5.2 innings from them. A leadoff single by Upton in the ninth gave us hope of a miraculous comeback, but Montero flew out to left, then Reynolds and Stephen Drew struck out swinging, an appropriate way to end the first half. 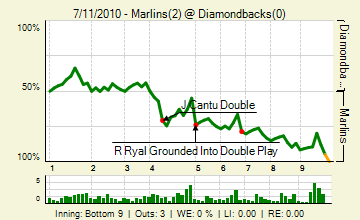 Quiet in the Gameday Thread, with early attention diverted to the World Cup final. The top three were Jdub220, justin1985 and jinnah; also present: Counsellmember, PhoenixFly, Rockkstarr12, emilylovesthedbacks, edbigghead, 4 Corners Fan, Jim McLennan, Clefo, kishi, mrssoco, hotclaws, snakecharmer and NASCARbernet. Only one comment reached "green" status, which makes selecting Comment of the Thread pretty easy. It followed on from the revelation earlier, courtesy of his mom, that Enright used to run around in a Superman costume as a kid. So when Jdub220 observed a similarity between Enright and Boyer, he followed up with

The only way you can tell them apart

is the spandex outfit with the big "S" on it.

And that brings the first half of 2010 to a close. I think it's safe to say that the Diamondbacks are not where they wanted or expected to be at this point, so here's to better in the second-half. Thanks for all your support so far. Even though the performance of the team has largely blown chunks, visitor numbers to the 'Pit are up about 40% on the same period in 2009, and that's due to the efforts and hard work of everyone who contributes - even if it's just a "+1" on a comment thread somewhere!

The next Arizona game isn't until Friday, but we won't be idle in the meantime. Tomorrow, I'll reveal my NL West All-Star team, and we have Chris Young in the Home-Run derby. Tuesday is the All-Star Game itself, of course, so there'll be a GDT for that. Wednesday, we'll reviewing the season to date, and on Thursday, there'll be a collation of all the trade rumors so far, with a view to seeing who might be going where. So keep stopping by, in between watching the fun over in Anaheim