Diamondbacks 5, Marlins 4: Back to the Eighties

Share All sharing options for: Diamondbacks 5, Marlins 4: Back to the Eighties

Totally bitchin', dudes and dudettes! They should do Eighties Night every evening at Chase! It guarantees a win! Well, maybe that's a bit of a stretch, but regardless of the result, we certainly had a blast in the Gameday Thread, trading baby pics [or, for those of us born just a little before the eighties, grown-up pics...], eating popcorn and enjoying the sight Chad Qualls, getting into the spirit of the occasion by pitching just like he did in 1988. When he was nine.

Still, Mark Reynolds and Chris Snyder got their twentieth and tenth homers of the season, while Ian Kennedy finally got the win he has deserved for quite some time. It was fantabulous, even if, as Justin pointed out, it was kinda weird to have an Eighties Night, featuring two teams that never existed in that decade. Details after the jump.

Well, it eventually ended fantabulous. I can't help wondering where Kirk Gibson was for the first 87 games of the season. I kinda thought he was supposed to be in the Diamondbacks dugout, but I can't help wondering if that was simply a mannequin, and he was actually on safari in the darkest Amazon or something. Because he apparently is the only person associated, in any form, with the Diamondbacks, to be unaware of Qualls' utter suckage this season. Gibson cheerily wheeled Qualls into a save situation tonight, and before you could say "Are you on crack?", the three-run lead had become one. With the tying run on first-base. Oh, and no actual outs recorded.

Finally. Gibson apparently awoke for his chloroform-induced slumber and yanked Qualls off the mound, turning instead to Juan Gutierrez. Not so long ago, that would have been the equivalent of removing a splinter from your finger with a chainsaw, but J-Gut has mostly been decent of late. And tonight might just have been his best outing of the season, as he got three outs in just five pitches. He first got the pinch-hitter to sky one up almost over the pitcher's mound, which Tony Abreu didn't so much call everyone off as shriek them off. And the next batter then ground into a first-to-short-to-pitch double-pay, emphatically ended by Gutierrez to seal the win.

Arizona certainly made the most of their chances, scoring their five runs on only six hits - also worth noting, only three strikeouts tonight, tying a season-low, and giving us a streak of three games without reaching double-digits in K's. The Diamondbacks took the lead with a sacrifice fly from Chris Young in the first, and added single runs in the third and fourth, on a Justin Upton single and Reynolds' homer to left-center respectively. Snyder then completed our scoring with a two-run shot in the sixth, having been robbed at the wall earlier in the game by a leap that even we had to admit was pretty impressive. Stephen Drew had a hit and three walks, Reynolds a walk plus his homer.

Meanwhile, Ian Kennedy was pitching well, keeping the Marlins in check and shutting them out through the front four innings, before a homer ended the shutout bid. He allowed another run in the sixth, and it felt like Gibson had a quick hook, relieving Kennedy with one out, and Kennedy only at 93 pitches. His final line was two runs on five hits and two walks, with five strikeouts. Esmerling Vasquez was very good, retiring all five batters faced, Jordan Norberto did the LOOGY thing, and Heilman worked around his own error and a couple of hits, with all three men recording that most useless of stats, the "hold". The ninth has already been discussed. We shall not speak of it again.

The AP recap of the event was sniffily dismissive,citing "A pregame parade included the "A Team" with a scrawny Mr. T, the Ghostbusters ambulance and a Delorean driven by a linebacker-looking guy who was supposed be Marty McFly from Back to the Future," and snorts at the "Pacman sound effects played on strikeouts, Frogger noises on walks." At this point, I tend to take whatever amusement I can from the team, so bring it all on. But even the lure of a Greg Schulte bobblehead - it being his 2,000th game as a broadcaster - could only get 21,627 to the park, which must be a franchise low for a bobblehead night. 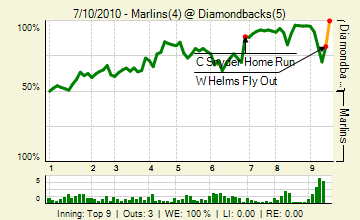 That little dip in our Win Probability during the ninth inning is now to be known as the Qualls Trench. It was Laideez Night in the GDT, with three of the four to break a hundred being of the fairer sex: justin1985, mrssoco, jinnah and snakecharmer, in that order. Also taking part: katers, Jim McLennan, Clefo, kishi, BattleMoses, emilylovesthedbacks, asteroid, 4 Corners Fan, AJforAZ, mrs snakepit, BigPapaKishi, edbigghead, hotclaws, Jdub220, diamondintherough (welcome!), brian custer and battlekow. Comment of the night goes to mrssoco:

Conversation with my mom

See you all tomorrow, as we climb back into the time machine and return to the present day.