So far in Manager Kirk Gibson's reign, the Diamondbacks' games seemed to have gone either really well (wins 12-5 and 10-4) or really poorly (losses 14-1, 9-4, 8-3). Could we actually get a normal game tonight? Sure, but could we win that normal game? No, of course not. Going in, tonight's matchup of Dan Haren and Ricky Nolasco didn't seem to be a pitcher's duel, but that's how it essentially ended up. Nolasco kept the Diamondbacks hitters at bay, and Dan Haren couldn't work out of quite enough jams. Florida took the second game of the series, and the Diamondbacks are still without a two-game home win streak.

Dan Haren started the night off with a strikeout. A few minutes later, he'd loaded the bases with Marlins off of two singles and a walk. Thankfully, he got out of the inning unscathed, but it was unclear whether GoodHaren or PodHaren had shown up tonight. Florida struck for their first two runs in the 3rd inning. A walk to Hanley Ramirez and a hit-and-run from Jorge Cantu just past the outstretched glove of Stephen Drew were the two runners on base. (Though he made no errors, Drew did not appear to be on his best fielding behavior tonight.) They each scored on back to back singles from Dan Uggla (a bloop single in front of Chris Young) and Cody Ross to make it 2-0. The score could have been 3-0 but the JUpzooka canon in right field kept Uggla at bay, and Dan Haren got out of the inning without further damage.

Arizona started to claw back in the 4th inning. Justin Upton and Mark Reynolds both struck out, but with Miguel Montero on first base, Adam LaRoche knocked a single to center and Stephen Drew walked to load the bases for Gerardo Parra. Parra, who was 4-for-5 last night, took some good pitches and then ground a ball weakly back to the pitcher Nolasco, who completely whiffed on it. By the time Uggla shoveled the pass to second base, all the runners were safe. (It was ruled a single to the pitcher.) Dan Haren took a whack at helping his own cause and nearly hit a grand slam. It was about six inches from going over that yellow line, but the 6'5" tall right fielder Mike Stanton just casually reached up and caught the fly ball to end the Diamondbacks' threat.

Haren settled down, retiring 12 of 13 Marlins in the 4th, 5th and 6th innings, and seemingly doing it on fewer and fewer pitches each inning. But with two outs in the 7th and at over 100 pitches, Dan struggled to put the Marlins away, and an RBI infield single was the straw that broke his back. Juan Gutierrez relieved and ended the inning with only the one Florida run coming across. (Aaron Heilman pitched a scoreless 8th and 9th.) Arizona's half of the 7th inning started off promising, with a double from Drew and a walk from Parra. Augie Ojeda laid down a beautiful sacrifice bunt to move the runners over, but only a Chris Young groundout scored the Diamondbacks' second run. The Diamondbacks went quietly in the 8th (strikeouts by Upton, Miguel Montero and Mark Reynolds) and 9th and the Diamondbacks took the loss, 3-2.

Nolasco gave the Diamondbacks few opportunities, only six hits and three walks, and they were spread throughout the game so they didn't make much of an impact. Haren was fine, just not fine enough for his anemic offense. Justin Upton and Mark Reynolds continue to pile up the strikeouts, and although at least the team managed to avoid double digits tonight, all 9 strikeouts came from batters 2-5 in the order. If Gibson wants to base his lineup on performance, I expect to see changes tomorrow. 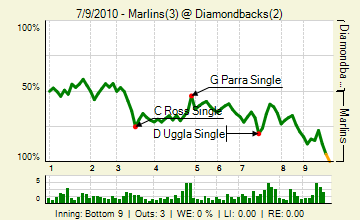 The gameday thread was.... well, not exactly quiet, but not exactly brimming with gameday excitement either. Not even Haren's almost-slam generated much of a jump. The threat/fear of possible Diamondbacks trades kept us chatty, though. Fewer than 600 comments for the night, Jdub just barely piped kishi. mrsssoco was third, but did not get into triple digits. All present were: Spaghetti_Monster, Jdub220, justin1985, AJforAZ, snakecharmer, kishi, hotclaws, unnamedDBacksfan, Azreous, mrssoco, katers, venomfan, NASCARbernet, jinnah (friendly visiting Red Sox fan), and BattleMoses.

Comment of the day is this picture from mrssoco. Her "Fierce Face" must've worked, because they did throw 2 1/3 scoreless innings!