8.02
The pitcher shall not --
(a) (1) Bring his pitching hand in contact with his mouth or lips while in the 18 foot circle surrounding the pitching rubber....
PENALTY: For violation of this part of this rule the umpires shall immediately call a ball.
-- Official rules of baseball

Add another to the list of... interesting, shall we say, things the Diamondbacks have taught us this season. A violation of the rule cited above by Blaine Boyer in the seventh inning, going to his mouth and then straight to the ball, was immediately flagged by the first-base umpire. With the count being 3-0, that led to an automatic walk, which helped the Braves score the go-ahead run. Sure, we might not have won anyway, but it certainly didn't help, and is a pretty-accurate summary of the way our season has gone.

Walks were a real problem for the Diamondbacks throughout this evening - in particular, the two handed out to the opposing pitcher by Edwin Jackson. It's the first time we've done that since Jeff Suppan walked twice for the Cardinals in September 2006, and the second of them was particular damaging. It came with two out on the sixth, on four straight balls, and instead of the inning being over, the next two batters both singled and the Braves tied it up. See also the eighth inning, where Esmerling Vasquez walked the lead-off man, who came round to score and give Atlanta the lead once again.

It was that kind of game, with never more than one run separating the teams almost all the way through the game. The Braves took the lead in the first on three hits, but the Diamondbacks answered right back, with a pair of solo home-runs by Kelly Johnson and Justin Upton - curiously, both of which clanged loudly off the left-field foul-pole. Atlanta then countered right back with two runs of their own, in part thanks to a wild pitch by Jackson - his National League leading ninth of the season. But a Mark Reynolds home-run, onto the balcony in right-center field, tied things up at three apiece.

So things continued. As soon as one team scored, the other answered back immediately, with no team holding the lead through the next half-inning until the bottom of the eighth, when Arizona could answer back after Atlanta took the lead on two walks and a double off Vasquez. The ninth saw the return of Juan Gutierrez, who had largely been the forgotten - or, perhaps more accurately, ignored - man in the bullpen, having only thrown six in-game pitches since May 26th. It did not go too well: two hits, a walk and a run-scoring wild pitch gave the Braves an insurance tally, the first gap of more than one run either way, in the middle of the ninth.

It wasn't a great start overall by Jackson, who just didn't seem to have control of his stuff to the degree we saw last time out in Los Angeles. The Braves, particularly early on, seemed to be teeing off with abandon on his slider, though there were some interesting hits on balls out of the zone. None more so than Infante's swipe at a ball that might have knocked his helmet off, if he hadn't swung at it, that somehow floated down the left-field line to score a run. Jackson's final line was four runs, all earned, on nine hits and three walks over six innings. He threw 110 pitches, which if my math is right, moves him up to fourth-most in the NL this year [Dan Haren is #1]

Seriously out-hit by the Braves, 14-7; while we did have three home-runs to their zero, all of ours were solo shots. Johnson had a good night against his old team, getting three hits and driving in three runs, but Reynolds was the only other batter for the Diamondbacks to reach more than once, with a walk to add to his home-run, leading off the ninth inning. That brought the tying run the plate, but we couldn't get anything more against Billy Wagner,. who impolitely refused to repay Chad Qualls in kind for his wildness last night, retiring the next three batters without any further difficulty. 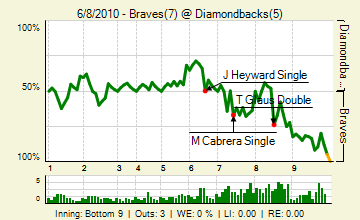 800 comments on the nose, with 'skins the only man in three figures - Wailord reached the nineties, while unnamedDBacksfan fell just short of eighty. Also present: BattleMoses, hotclaws, kishi, snakecharmer, Jim McLennan, Clefo, Jdub220, dima1109, MidnghtDrgn, AJforAZ, pygalgia, katers, BigPapaKishi, skoormit, venomfan, You'veBeenBannedFromAzSnakepit, Bryan J. Boltik, mrssoco, Wimb, 4 Corners Fan, Scott Howard, marionette and Jargamus Prime, so thanks to them for their input. Only a couple of green comments this evening - I'll go back to reminding you to use the 'Rec' button tomorrow night, I think - but a worthy winner, courtesy of Clefo:

We reconvene tomorrow night; I'll be watching the game from the press-box at Chase, as I'm guesting on Fox Sport Arizona's webchat with Jack Magruder. More on that tomorrow. Much more. Trust me on that. :-)