Yeah. This one will look a good deal better as a box-score on baseball-reference.com than it was experienced as a contest. After the offense, led by Steven Drew, bust out the whupping sticks on Derek Lowe to drive the D-backs to a 7-1 lead in the fourth, this one should have been over. However, mediocreHaren showed up, and was not exactly helped by wobbly outings from a couple of members of the bullpen. Despite being six runs down, Atlanta put the tying run on base in both the eighth and the ninth inning. Fortunately, that is just where they stayed, and Arizona continued to tip-toe through the minefield of their June schedule with a win.

Details after the jump, as soon as I've finished breathing into this paper-bag...

Both pitchers had their pitch counts jacked up severely early on: it took Dan Haren and Derek Lowe a total of 180 pitches to get through the end of the fourth inning. And both teams had similar numbers of at-bats with runners in scoring position to that point: eight for Arizona, seven for Atlanta. However, the difference is that the Diamondbacks got three hits - the big blow being a bases-clearing triple by Stephen Drew. The Braves had only one hit, and that didn't even score a run, as it was a hard-hit ball to right with a runner on second. Their run came on a groundout with the bases loaded and one out in the third, when Haren pitched out of a nasty jam.

That run made the score 2-1 to Arizona, as the Diamondbacks had taken the lead with a two-run first. Singles by Kelly Johnson, Drew and Conor Jackson got the first tally on the board for us before an out was recorded, and though the next three hitters were retired on groundballs, an aggressive slide by Justin Upton on a ball by Adam LaRoche, kept the inning alive and allowed Jackson to score. The big inning, however, was the five run fourth: Mark Reynolds homered with one out, a single and two walks loaded the bases, and Conor Jackson got an RBI infield single, before Drew flushed the bags of Diamondbacks with his sixth triple, tying him for the league lead.

The resulting 7-1 lead gave Haren a bit more breathing room, which he certainly seemed to appreciate, having wobbled his way through the front four frames, allowing six hits and a couple of walks - the first free passes given up by Haren since May 16th. He certainly seemed to be struggling with his control, and the final count was 73 strikes in 114 pitches: 64%, a little below his average of 66%. The Braves added another couple of runs in the sixth, helped by a poor throw from Chris Young which allowed an extra runner to move into scoring position. Haren failed to get throw six frames for only the second time this year. He allowed three runs in 5.2 frames, on nine hits.

It was thus up to the bullpen. Esmerling Vasquez continued his rehabilitation from the balkoff game by retiring all four batters he faced, with a couple of K's - though he, too, didn't seem to have much control over his fastball, and relied mostly on his change-up. He ended the sixth, stranding a runner in scoring position, and also retired the Braves in order in the seventh. Carlos Rosa then came in for the eighth, and got very wobbly: the only out he got was on a kick-save to Reynolds, who made a nice play to get the runner. The bases were loaded with one out, Aaron Heilman hit the next better, to put the tying run on base, but a shallow fly and a comebacker - almost thrown away by Aaron - calmed the nerves somewhat.

At least until the ninth, when Chad Qualls proved incapable of finding the strike-zone. He threw 16 balls and only ten strikes, walking the bases loaded with one out, to a chorus of energetic boos at Chase Field. However, he immediately managed to conjure up a double-play - I think he saw Juan Gutierrez start to warm up - and the day was saved, to Qualls' obvious, animated delight. Still, the final tally over the last two innings by the pen: two hits, four walks, a hit batter and five Braves left on base. As I said in the Gameday Thread, "It's terrible that I am nervous, a) with "only" a four-run lead going into the eighth, and b) for good reason." Even though the Win Probability never dipped lowed than 78.8% - after the Heiman HBP - it was a seriously twitchy last six outs.

It didn't help that the offense basically checked out after the departure of Lowe following the fourth inning. We managed only one hit against the Atlanta bullpen, a single in the eighth by Rusty Ryal - on the other hand, the Diamondbacks' hitters struck out seven times in those four innings. Jackson had two hits and a walk, Drew two hits and four RBI, and Johnson a hit and a walk, but overall, we were outhit by the Braves 11-7, and they also drew more free passes, 6-4. All told, they had 18 baserunners to our eleven, and were just one clutch hit away from making things far more interesting than I would have liked. 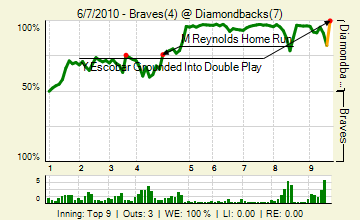 If Qualls walks this guy
put Heilman in someone else's uniform and put him out there again.

The win's the thing, but this is not the way I want to savor my victories. This one tasted far more like the broccoli of defeat than the chocolate donut of triumph. But we prevail, and roll onto tomorrow.