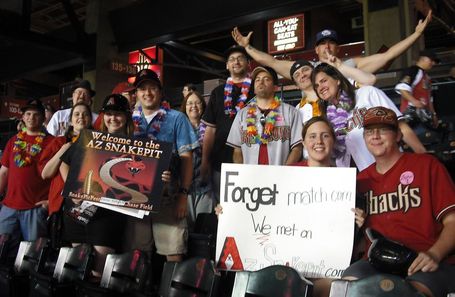 Ok, maybe it wasn't quite sixteen, but if we're pulling off the Dontrelle/Bruce metaphors, it's probably either that or Die Hard With a Vengeance. Our newest recruit pitched quite possibly the ugliest six inning shutout I've seen in quite some time, with five hits, four walks and a hit batter - but by the end, it was six zeroes that had gone up on the board. The bullpen, in the shape of Carlos Rosa, did their best to destroy the lead, but Aaron Heilman and Chad Qualls bolted it down, retiring the last seven Rockies batters, and the Diamondbacks finished their sixth consecutive one-run game, guaranteeing they take the series.

Details after the jump, and a report from SnakePitFest: this will include an apology to Mr. Ryan Spilborghs and a memo to self, as a reminder that megaphones will not be a part of future Fests.

The first inning pretty well set the tone for Willis' first game with the team: he only threw three strikes, but with the help of a double-play, escaped. That was the closest he came to a clean inning: he left two on in each of the second, third and fourth, then one-upped himself by striking out Brad Hawpe with the bases loaded in the fifth. Another runner was stranded in scoring position in the sixth, but the key word there is "stranded". The Rockies were amazingly inept the clutch, and that's what saved this game for Arizona. They were 0-for-11 with RISP, and left 12 on base, all through the first seven innings.

As for Willis... 106 pitches, 60 strikes - that's a 56% rate, exactly in line with his time in Detroit. He may have been nervous, as I'm pretty sure the ratio was closer to 50/50 initially. He did throw first-pitch strikes to 16 of the 27 batters he faced, 59%, which is actually better than the 50% posted while with the Tigers. The walks are definitely an issue - we can't expect the opposition to go ohfer every night with runners in scoring position, but he kept the ball in the park and got more ground-balls then fly-balls. Given we're basically paying league minimum for him, I think this has the potential to be a very solid pick-up for the Diamondbacks.

And then Carlos Rosa happened.

Rosa had proven himself quite serviceable previously, but was far from the case this evening. He loaded the bases without retiring a Rockie, on two singles and a walk. He then got a couple of run-scoring sacrifice flies, but couldn't c close the deal, re-loading the bases with another hit and free pass. All told, five of seven batters he faced reached, and the other two drove in runs. Not impressed. Aaron Heilman then entered the fray, and promptly walked in another run, on four straight balls, to make the score 4-3. He finally got the last out, but the energy and enthusiasm which had been present in the crowd [or, at least, our corner of it] has been replaced by restless stirring.

I suppose I should crank back the tape and discuss our offense. Willis scored out first run, after singling to lead off the bottom of the third inning. He advanced to second on an error, and came around to score thanks to a Stephen Drew single. However, I think AJ Hinch might have a quiet word about his starting pitcher sliding into home-plate head first, and especially since Dontrelle led with his throwing hand...  The Diamondbacks had quite their own chances to score - twelve at-bats with RISP - but the game stayed at 1-0 through the bottom of the sixth inning.

A pair of one-out walks - one intentional - and a wild pitch put men on second and third for Ryan Roberts, pinch-hitting for Willis. He'd delivered the walk-off hit yesterday, and came through big-time again this evening, driving the ball down into the left-field corner, for a two RBI-double. Kelly Johnson then doubled him home, with a blast off the outfield wall in center, and the Diamondbacks were up 4-0. That was it for the offense: Conor Jackson had a hit and two walks; Drew two hits; and Young a walk and a hit. However, Justin Upton went hitless with three strikeouts, and Chris Snyder also had three K's, and an 0-for-4 evening.

The eighth and ninth innings were... Well, actually as uneventful as could possibly have been hoped, with Colorado retired in order. The ninth was particularly calm: Chad Qualls threw eight pitches, six of them strikes, generated three ground-balls, and all potential for drama was thus averted. Did anyone miss it? Because I didn't, and would like to see more of these placid, 1-2-3 ninth innings in future. Victory was thus confirmed, with Dontrelle Willis picking up only his third victory in 23 starts since leaving the National League at the end of 2007. After a long losing run, it's good to put back-to-back victories together, and go for the sweep tomorrow, with the series in the bag. 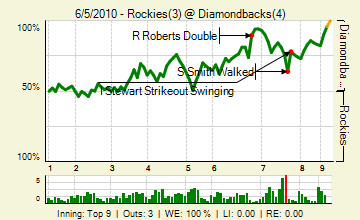 Comment of the night? Let's give it to one of the rookies, for speaking the ultimate truth:

Yes, yes - a million times yes. You will fit in very nicely here. ;-) We stoically refused to participate as it rolled around the park tonight. Which was kinda weird, because otherwise, we were the really loud section. I saw in the GDT 'Charmers said Jack Magruder mentioned "the people by the left-field pole." That would have been us. To aid with the noise-making, Mrs. SnakePit had brought little plastic megaphones, which were used to devastating psychological effect, particularly by edbigghead and DbacksSkins. Memo to self: do not sit directly in front of a megaphone-enhanced 'Skins next time.

The target of almost all the heckling - a near continual barrage of commentary - was Rockies left-fielder Ryan Spilborghs. We caught him glancing over in our direction a few times, but it was hard to tell if he was amused or disturbed - ed's menacing growl of "WE KNOWWWW WHEERRRRE YOU LIIIIIIIVE, SPILBORRRRGHS" was delivered so as to come beautifully close to the thin line between heckler and staclking. Nothing personal, Ryan: I know you were looking forward to a quiet time here in right-field at Chase, but you didn't reckon with the passionate insanity which is... SnakePitFest! [Nor did Krystina/babyback52, the other half of a work colleague, who was delighted to be sitting for once with people for whom yelling at the top of their lungs is part of fandom.]

I do want to write more, but I am totally beat, and am running on the last fragments of adrenalin and DayQuil. I'll see if I can dig out and upload some more pics tomorrow, but I'm off to crash. Thanks to everyone who showed up or helped make this a fabulous time, from the moment we arrived at Sliders', to the final out. It was a great day, a great game and the next one will be on Saturday August 7th. When we will get to heckle the Padres' Kyle Blanks, I think. :-) 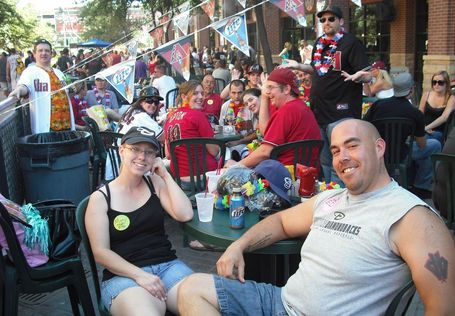