Share All sharing options for: Diamondbacks 7, Rockies 6: Walk-off In a Winning Wonderland

There was something peculiarly geometrically satisfying about the way the Rockies scored their runs this evening. A solo home-run in the first, a two-run homer two innings later and then a three-run homer three further frames down the line. If this game had gone ten, I imagine Colorado would have got a grand-slam, but fortunately, we were saved another extra inning defeat, by the simple method of scoring two runs in the ninth to beat the Rockies, and end the ten-game losing streak,

Details after the jump. That's the fifth consecutive walk-off contest in which the team has been involved. Not sure what the record is, but this can't be far off it.

Another Quality Start by a Diamondbacks pitcher, but this won actually led to a victory after five consecutive QS that led to a loss - the last time we got a QS and actually won, was all the way back on May 19th. Admittedly, the only reason this counted, was because the three runs Ian Kennedy allowed in the sixth all were unearned, the result of a one-out error by Kelly Johnson - his fifth of the year. That prolonged the inning just long enough to allow the third blast of the evening off Kennedy - the 91st allowed by a Diamondbacks pitcher this season. The next most in the National League are the Pirates, but they're all the way down at only sixty-two.

After the lead-off homer to CarGon (yeah, rub it in...) on a poorly-located 0-2 pitch, Kennedy settled down, getting his next five outs by means of the K. And the Diamondbacks wasted no time coming back. Kelly Johnson singled, and Justin Upton deposited a pitch way back to left-center, to give Arizona the lead. However, it lasted only until the third innings, when the Rockies used their own two-run homer to regain the one-run advantage in their direction. The Diamondbacks tied it up immediately, on a Mark Reynolds sacrifice fly, but having loaded the bases with one out, it seemed like a wasted opportunity - and not the last of the night.

Colorado saw our run, and raised us two more, sinking the home team into a 6-3 deficit by the middle of the sixth. And I think I probably wasn't the only one thinking the losing streak was going to get turned up to eleven. After all, the Diamondbacks hadn't come back from three runs down since that mad game on April 28th where we led 6-0, trailed 11-6, and won 12-11. However, the Diamondbacks chipped away, getting a home-run from Chris Young in their half of the sixth, though Upton grounded out with the bases loaded to end the frame. Another Reynolds sacrifice fly in the seventh scored Stephen Drew, who had tripled, and made it a one-run game.

The Diamondbacks seemed to have wasted their best hope of tying the game in the eighth. Two singles and a walk had loaded the bases with one out - again for Upton. But he chased a high pitch, out of the zone - there appeared to be some demolition going on, just out of the sight of the cameras, when he returned to the dugout. Drew then followed suit, meaning Arizona were down to their last three outs. And that wasn't good, because the team were 0-24 when trailing after eight innings so far this season.

A quick word about the bullpen is in order first, as they deserve credit for a very solid performance. Esmerling Vasquez pitched two hitless innings, striking out five men. He's the 13th Diamondback reliever to manage that feat - ok, I suppose really the 12th reliever, plus Randy Johnson... The last was Juan Gutierrez, on April 19th last year. Y'know, back when he was good... Byung-Hyun Kim managed it no less than seven times, which is one off the NL record in the past decade, held by Octavio Dotel. Add in the K by Qualls in a perfect ninth, and we had ourselves 14 strikeouts, the most by the team this season.

But we were still one run down in the ninth, and a fly-out by Adam LaRoche put us down to our last two outs. Mark Reynolds got himself hit for the second time tonight - this one was off his lower-hand and looked to be very painful. Anything that gets Reynolds going down in a crumpled heap is not pleasant, and he was replaced and led to the dugout - I hope he's alright. Young singled, and Gerardo Parra tied the game up with an opposite-field hit, which the left-fielder bobbled, scoring pinch-runner Edwin Jackson. Ryan Roberts then came off the bench and punched another hit back up the middle, sending Young home and setting off a massively-relieved dogpile at home-plate.

Two hits apiece for Upton, Young and Parra, but a remarkable performance by Kelly Johnson, who went 1-for-1... With four walks. That ties a franchise record, last done on May 5th, 2005 by Jose Cruz, though one of those was intentional. To find a D-back who took four unintentional free passes, you have to go back more than eight seasons, to May 26th, 2002, when Gonzo did it. But that was an extra-inning game. Four unintentional walks for an Arizona hitter in regulation? Jay Bell, June 6th, 1999 - that's the only time prior to tonight. Perhaps even more remarkably, Johnson had the only four walks the team managed. No idea how to look into how rare that is. 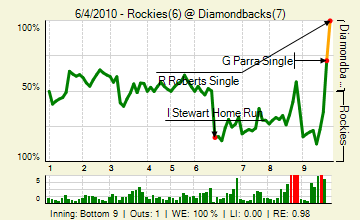 Thanks to Daron Sutton for the shout-out in tonight's broadcast, telling people to come to the 'Pit to watch the video of the Visalia brawl. I think it's safe to say it had a significant effect on site-traffic for the day. ;-) It's great to finally be out from under the losing hammer, and hopefully we can continue that behind Dontrelle Willis when the SnakePit rolls into Chase Field tomorrow afternoon for the first SnakePitFest of the year.

I forgot to select a Comment of the Night. By a landslide, it should be my own suggestion that the ballpark be renamed SnakePit Field, which seemed to be highly popular. However, I can't really award it to myself. Most of the other green comments were a lyrical exchange between soco and Wailord - but I suspect that most of the recs there were by soco and Wailord too... So instead, we'll go with mrssoco:

Yep. If we never see it again, that'd be fine. It was also a delight to see an Arizona player interviewed after the game - I genuinely thought they would still go and interview Andre Ethier regardless, and ask him what he thought of the Diamondbacks' victory. Anyway, I'm now off to take large quantities of NyQuil and go to sleep.