Diamondbacks 4, Cardinals 2: The Price is Enright

Share All sharing options for: Diamondbacks 4, Cardinals 2: The Price is Enright

The Diamondbacks headed into today's series finale with the Cardinals looking to maintain a shred of decency. After all, it was arguable which of their two previous losses was most pathetic - an 8-0 shelling that was never in doubt, or a 6-5 debacle where someone in the Arizona infield seemed to have had money on St. Louis. To do so, the team sent up Barry Enright for his major league debut, as he took Edwin Jackson's spot in the rotation after his laboring no-no.

Well, the rook got a win in his first start, thanks to some timely offense - sort of - and a reasonable outing from the bullpen.

It looked like same Diamondbacks, different day in the first inning. The offense wasted an opportunity in the top half, getting runners on first and second with one out and doing nothing with them. Meanwhile, after starting the bottom half with a liner and a K, Enright gave up a base knock to Pujols (no shame there) and a triple to Holliday to find himself trailing 1-0. He got out of the jam without any further damage, though, and it turned out that was all he would give up this afternoon.

Enright was also known for his prowess at the plate in the minors, and he tied the game up, albeit not through his own doing really. After back-to-back hits to start the second, Ojeda popped out feebly, and Enright followed that with a 27-hopper to our old friend Felipe Lopez at third. Lopez botched the play, however, permitting Reynolds to come all the way home from second. That error stopped more futility by the D-back offense, as Drew and Ryal both failed in another RISP situation, and the game was tied at 1.

More chances were wasted in the third and fourth - a leadoff double in the 3rd (Upton, who moved to third with one out) and a runner at second with two out in the 4th that both failed to score. But in the fifth, the Diamondbacks finally broke through against Jeff Suppan, with Chris Young launching a home run with a runner on to make it 3-1. That margin put Enright in line for the win, and though he labored to get through the fifth (102 pitches), he escaped into the dugout with that same margin intact.

The game was relatively quiet after that, albeit long (almost four hours total). Arizona tacked on an insurance run in the sixth. Snyder led off with a hit (his third), but was erased by an Ojeda double play. Enter Dan Haren, pinch-hitting for Enright and showing the youngster what was up by working a six-pitch walk. Consecutive hits by Drew and Ryal brought home our hitting phenom.

Then, the bullpen. Ah, the bullpen. Boyer started the sixth strong, but couldn't get out of it after two quick outs. Single, steal, single, steal, walk loaded the bases, but Gutierrez (yes, him) picked up his mate by retiring Pujols (yes, him) to end the inning. Another stolen base set up a St. Louis run in the seventh off Gutierrez, but he maintained a two-run lead. Qualls (yes, him) had a 1-2-3 eighth, which lowered his ERA to....8.23...and his WHIP...to 2.12. Well, keep at it Chad. And Heilman gave us a scare in the ninth with a pair of one-out hits, bringing the winning run to the plate once again - but this time he got through it with relative ease, and just like that we had avoided the sweep. 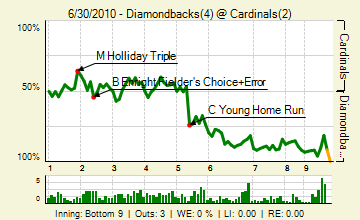 Enright escaped his five innings, giving up four hits and four walks, but striking out five and giving up just the run in the first. His lack of control tied in to a recent theme for the Diamondbacks: walking a ton of batters. To wit, here are the past six outings by an Arizona starter not named Dan Haren, with the name of that night’s pitcher and the team’s total for the game:
Enright 4 (6)
Willis 6 (8)
Lopez 5 (7)
Kennedy 9 (11)
Jackson 8 (8)
Willis 7 (13)

Simply put, that’s abysmal. Horrendous. Pathetic. Insert synonym here. That we’ve managed to win three of our past eight games despite handing our opponents free opportunities to score is nothing short of mind-boggling.

One other trend that became even more painfully apparent in today’s game: Teams are no longer afraid of running against the Diamondbacks, and especially against Chris Snyder. Once upon a time (say, as early as last year), the basic scouting reports on catchers went like this: Montero – offense good, defense bad; Snyder – offense okay, defense good. That no longer seems to be the case.

After five Cardinals swiped bases today, Snyder is now just 12-for-57 throwing them out, a meager 21 percent (Montero is currently at 25, and Hester was a whopping 0-for-15 in his time behind the plate). Thing is, this continues a trend of the past five years. Snyder’s career average is 31 percent, but he peaked in 2006, throwing out 45% of would-be base stealers. Since then, he’s regressed each season (36, 31, 24, now 21). This is one of those cases where previous perception clouds our judgment of a player’s defense, otherwise known as the Orlando Hudson Corollary.

Comment of the Night, which I always forget because I wasn't around for its inception, goes to the following. There were only two green comments, and I didn't like either of them, so I'm exercising my power to go off the board and choose a different one. Let that be a lesson to rec more in the future. Instead, for all the post counters out there:

I need to rethink my life.

Arizona is off tomorrow before starting a 10-game homestand that takes them into the All-Star Break. First up is the Dodgers, and Edwin Jackson will try to throw a second no-hitter because he's awesome like that. We'll see you then.