Last night, Arizona might have felt more than a little aggrieved at having contrived a way to lose that one - if manager AJ Hinch has been losing sleep this season, that contest will have been one to keep him awake. He should sleep pretty well tonight, however, for his team were comprehensively outplayed in every department of the game. The Cardinals #2 and #3 hitters combined for more hits than the entire Diamondbacks line-up, and Dontrelle Willis handed out more free passes by the time he got his fifth out, than the St. Louis pitching staff would allow all night.

All that, and more astonishing Fail by Arizona with the bases-loaded. Details after the jump.

Let's start with that, which was basically the only chance the Diamondbacks had to get back into this game. It was the top of the fifth, with the score at that time only 2-0 to the Cardinals. A walk and a couple of singles loaded the bases for Arizona with no outs. But, inevitably, we failed to score. I say "inevitably," because that is the fourth consecutive time the Diamondbacks have loaded the bases with no-one out and completely failed to score, all of them having come since June 13th, including three times in the past week.

All told, we have had 12 at-bats with ducks on the pond since the last time we got a run in from that situation (a LaRoche single earlier in the Yankees game), and Arizona have gone 0-for-12 with two double-plays. That's 14 consecutive outs made in bases-loaded situations, without as much as a sacrifice fly - even though eight of those at-bats came with less than two outs. Like I said: inevitably. It has got to the stage where I wouldn't be surprised to see opposing pitchers deliberately loading them up to start an inning, just so they can take advantage of our abject awfulness in such situations.

Albert Pujols delivered his second-home run of the night, a two-run shot, before Willis retired another batter [dammit, we should have pinch-hit for Willis in the top of the inning], and the Arizona offense left the park even quicker than the ball did. We managed just three singles and a walk the rest of the way, while the Cardinals added on. Which brings me to our pitching. Did Willis manage to live up to his pre-game statement, "I have to be aggressive. I have to hit the target. I'm going to do it." Things started off well enough, with Dontrelle at one point throwing a dozen straight strikes.

However, that was simply flattering to deceive: by the time he was yanked, with two in, two on and no-one out in the fourth, he had thrown as many balls as strikes. He hit a batter and had six more walks tonight, making his tally for Arizona, two hit batters, four wild pitches and twenty-seven walks, in 21.1 innings of work. And, for really the first time, he was also slapped around by the opposition, giving up seven hits in four IP, two of them Albert homers. I think it could well be that, if Barry Enright does well in his spot-start tomorrow, it may be the end of the Willis experiment here. And, by "does well", I mean, walks less than one batter per inning with an ERA below six or so.

The bullpen didn't exactly help, though I suppose three earned runs in four innings of work is actually slightly-better than their average outing. It was another 2-for-2 night with inherited runners though, thanks to Carlos Rosa, jacking our ratio there to a National League worst 49% of them coming around to score. League average is 32%. Sam Demel's pristine ERA is no more, as he allowed two runs in his inning of work, though there were scoreless frames for Chad Qualls and Esmerling Vasquez - though the former has a great bit of glovework by Augie Ojeda to thank, for not having to face Pujols with two men on.

Cole Gillespie was the only Diamondback hitter to reach safely more than once, notching a couple of hits. One was an infield knock, the sole bit of Arizona success with runners in scoring position - we were 1-for-9 on the night. That merely triggered petunia-like sighs of "Oh, no - not again..." from the masses, as soon as they realized that we had loaded the bases with no-one out, and the Cardinals had us right where they want us. 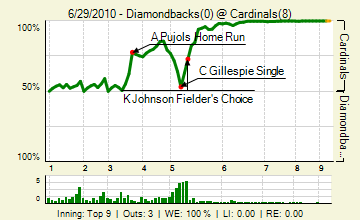 If the game was ludicrously uncompetitive, the same can not be said of the Gameday Thread, where the title of busiest commentator went right to the wire, with the two titans of "+1", Jdub220 and DbacksSkins, battling it out to the wire, before 'Skins prevailed by the odd comment in 357. No, seriously: it was 179-178. unnamedDBacksfan pipped kishi for third, with about half the leaders' numbers. Also present: Rockkstarr12, edbigghead, Clefo, blank_38, 4 Corners Fan,  snakecharmer, Jim McLennan, soco, asteroid, , hotclaws, Dallas D'Back Fan, luckycc, emilylovesthedbacks, ZonaBacks10, Taskmaster, Cardscrazy247, AJforAZ and katers.

Comment of the Night poses something of a dilemma. The most rec'd comment was one of mine, and a number of the other contenders would have required too much explanation and backstory in order to be amusing - and, as they say, if you have to explain it... Therefore, we'll go with the self-explanatory one below, from hotclaws:

It's not dog obedience class Willis!

with the more walks, the better...

Day game tomorrow folks, as we enjoy the debut of Barry Enright, the man with the best K:BB ratio of anyone in the history of baseball. Or maybe it'll just seem that way, after a Willis start. 11:15am first pitch, Arizona time, so get the caffeinated beverages ready.