Well, it wasn't necessarily pretty, but if you were one of those who were able to get up for the early start time were treated to the best of Diamondbacks baseball this season.  Pitching that was pretty good, when it wasn't giving up walks, some surprisingly sharp defense, stranding runners on base, and just enough offense to pull out the win.  All in all, that's pretty much epitomizes what Diamondbacks baseball is like, so it was probably appropriate that this was how we managed to put together our one thousandth win in franchise history.

It may have taken me a little while to wake up and follow the game, but that's okay, because the offenses of both teams felt the same way.  First pitch may have been at 10:40, but it wasn't until more than half an hour later, in the bottom of the third, when the game saw it's first hit as Hank Blalock singled off Rodrigo Lopez.  The Diamondbacks woke up in the fourth with two walks and a single to load the bases, but a Chris Young double play left us scoreless.

We got scares of a few sorts in the bottom of the fourth. A one out walk put Evan "I Was Never On Desperate Housewives" Longoria on first, then a ground out and a stolen base moved him to third with two outs.  Ben Zobrist hit one back off the Green Lantern's catching arm, though he was able to get the third out and keep the game scoreless.  There was some concern that Lopez might leave the game- in the GDT, soco said that Lopez's arm "looks like a parasitic alien is about to pop out."  We worried how badly the game might go if we had to call in the bullpen and the Colonial Marines.

The fifth inning was where the excitement finally started happening, both on and off the field.  Rusty Ryal got things going with one out with a triple to deep center, aided and abetted by some lackadaisical defense by BJ Upton.  With a runner only 90 feet from scoring, Gerardo "The RBI Machine" Parra came to the plate and lived up to his nickname, launching a fastball deep to center, for his second home run of the season, and his first out of the ballpark.  Parra's bats must like interleague play, as his only road home runs in his MLB career have both come against American League teams.  With a 2-0 lead secured, we headed into the bottom of the fifth.

Much drama ensued in the Rays dugout, when BJ Upton got into a scuffle with Evan Longoria between the half-innings, while DBacks fans breathed a sigh of relief to see that Rodrigo Lopez was still feeling well enough to continue pitching.  Things probably didn't get any better for BJ after he got picked off at first- in the Battle of the Uptons, Arizona was the clear winner, with Justin going 5 for 9 with a home run, while BJ was hitless on the series.

The top of the sixth was unpleasant, in the Diamondbacks took a lead-off double by the effective Upton, and turned it into a ground ball double play to end the inning.  Jim was kind enough to let us know the last time a team had grounded into a double play with only a runner on third was two years ago, when it was done by- well, that's not important.  In the bottom of the inning, the Green Lantern reminded us of Ken Levine's maxim on lead-off walks, giving up an RBI double to let Tampa close the gap to 2-1.  He closed out the afternoon with a pretty solid line- 6 innings, only two hits allowed, five walks and one run.

And then, the game ended in roughly the same way it started, with the respective offenses taking a breather.  The Diamondbacks didn't get a hit or a baserunner after Upton's double to start the sixth.  Fortunately, the bullpen came in for a pretty solid outing.  They gave up two walks to the Rays, but Brian Boyer, Juan Gutierrez, and Aaron Heilmann kept the Rays hitless, and Chris Young gave us a great catch in the outfield to seal the win, the series, and give the franchise a nice milestone. 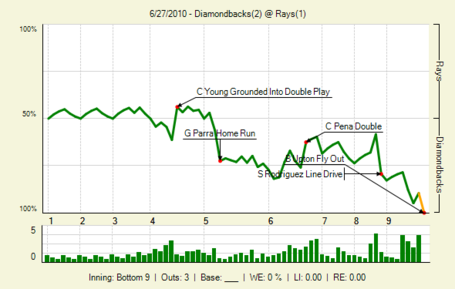 All our pitchers in positive numbers for win percentage?  A good outing, even if it wasn't pretty.  Edwin Jackson certainly set the tone for our pitchers in this series, because even if we gave up 26 walks in 26 innings, we held the Rays to only 7 hits.  Not too shabby.

in the comment race, a surprising outing for such an early start, as we passed 1350 comments in the post game. chatter.  Jdub220 took the top spot in commenting, with soco, DBacksSkins, and myself all hitting triple digits in the count.  Also showing up to the party were Wimb, hotclaws, Jim McLennan, blank_38, Rockkstarr12, Clefo, snakecharmer, pygalgia, jinnah (Hi Jenna!), skoormit, emilylovesthedbacks, Zephon, justin1985, unnamedDBacksfan, Dallas D'Back Fan, Bryan J. Boltik, Azreous, and Counsellmember.

Some good comments today- Jim described it as the World Cup of commenting today, with people bringing their A-Game.  In the end, I had to go with the comment that made me laugh the hardest, so today's winner is soco, when he said:

that’s true, except that Russ Ortiz is protected by his event horizon. Anyone who gets too close is never seen again and can never escape.

Science jokes and making fun of Russ Ortiz.  It's a winning combination.

So, a series win, and we're off to Saint Louis to faceoff with the Cardinals.  Again.  Get ready to hear more about Albert Pujols, ladies and gentlemen.