Share All sharing options for: Diamondbacks 3, Rays 5: The Wild Bunch

When Chad Qualls walked Matt Joyce in the bottom of the seventh inning, it set a new record. Because it was the 31st base on balls issued by the Diamondbacks' pitching staff over the past three games. That's the most free passes handed out by a team in a trio of contests, since detailed records began in 1952. Arizona surpassed the previous mark of 30, first set by the 1969 Expos, then tied by the 1997 Marlins. The final tally for the Diamondbacks since Wednesday: 32 walks, three HBPs and three wild pitches.

After dodging bullets last night, we couldn't repeat the feat. Every one of the five men who crossed home-plate for the Rays, reached base without a hit - four through walks, and one on a hit by pitch. And today's trivia question: six players have appeared in 25+ games for both the Tampa Bay Rays and the Arizona Diamondbacks. How many of them can you name?  The answer, and details of the game, are after the jump.

Initially, it seemed Ian Kennedy was going to escape, in much the way Edwin Jackson did. Both men stranded seven runners through the first three innings, though Kennedy did allow a second-inning run, on a sacrifice fly, and "only" walked five over that period, which I guess counts as positively Haren-esque control in comparison to Jackson's early wildness. However, unlike Jackson, Ian didn't settle down, and continued to walk opposing batters with regularity. He ended with nine for the day - he was the first National League pitcher to do that in over four years. You probably won't be surprised who was the last: Doug Davis for the Brewers in April 2006.

Kennedy's day was ended in the sixth, after three more walks loaded the bases with one out. Enter Sam Demel, who had previously been impeccable in his relief appearances. However, it appears that the other members of the bullpen had sat him down and had The Talk with Demel, about inherited runners and what you are supposed to do with them. Ever the good student, he followed the lead they had set, and all three men came around to score, giving Tampa Bay a comfortable enough cushion to allow them to coast to victory.

The Diamondbacks got a run back in the seventh, Chris Snyder driving in Rusty Ryal with a double, but Chad Qualls immediately handed it back. He hit a batter, who then stole second, took third on a wild pitch, and scored on a bunt single, completing his tour of the bases without the ball ever having left the infield. Chris Young homered to lead off the ninth for Arizona, his fiftieth run driven in and 13th long-ball of the season [Justin Upton had also homered in the fourth, tying the game at one]. But we could get no closer, and lost again. Upton led the offense with two hits and a walk, Snyder and Ryal managed a pair each.

The defeat was despite out-hitting the opposition once more, this time by a margin of 8-5 - and when you total up the bases from those hits, the margin becomes even greater, at 15 bases for the Diamondbacks to only six for the Rays. As noted above, the deciding factor was almost entirely the eleven walks allowed by the Arizona pitching staff over the course of the afternoon, compared to the one issue by the Tampa Bay pitchers. If we'd simply halved that number - and five or six would still be a hefty walk-rate - the odds are pretty good that we might well have won this afternoon's contest. Disappointing. 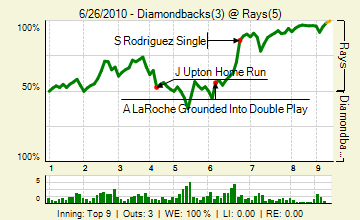 The early start time fooled a lot of people - not least myself - and probably contributed to the low turnout in the Gameday Thread. The early departure of Jdub220 opened the door for justin1985 to roll to victory, with more than the next two commentators, hotclaws and Clefo respectively, combined. Also taking part: pygalgia, Jim McLennan, emilylovesthedbacks, Bryan J. Boltik, Wimb, kishi, Dallas D'Back Fan, katers, piratedan7, BattleMoses, unnamedDBacksfan, dima1109 and jinnah. I had the most rec'd comment, but have already re-cycled it higher up the recap [The Bullpen Talk]. So I'm going with Jdub220:

Finally, the answer to the trivia question. The six men who have appeared in 25+ games for both 1998 expansion franchises are: Damion Easley, Jason Conti, Jose Cruz, Jose Guillen, Quinton McCracken and Travis Lee. Here's the full list of all twenty players who have worn Arizona and Tampa Bay jerseys. along with the years and games played for each franchise.