Share All sharing options for: More on Edwin Jackson's No-Hitter

The dust has settled on Edwin Jackson's no-hitter, the second ever in franchise history. In an era where they have become apparently commonplace - we've been averaging one about every three weeks so far this season - It was certainly one of the more memorable. Has any no-hitter ever started off as badly, with seven men left on base in the first three innings? I doubt it. I note that the only other such game which resulted in eight walks and six K's, was the infamous Dock Ellis one, which he later admitted was pitched while high on LSD.

Perhaps surprisingly, it doesn't rank that highly on the list of all-time "great" Diamondbacks' pitching performances, as measured by overall Game Score. It's not even in the top thirty, due to the high number of base-runners and relatively low strike-out total.But it's still worthy of more detailed analysis, and so that's just what we'll do, breaking it down and pointing out some more of what makes it such an unusual no-hitter. Diagrams! Charts! Pictures with dots on them! Join me after the jump for some sabermetric geeking-out.

It's a rarity for any team with a losing record to enjoy a no-hitter. 23 have been recorded since Arizona came into existence. Just six were by teams below .500 after the game - two by teams below .400, both of them by the Diamondbacks! The last time a team with a winning percentage below our current .392 threw one, was 30 no-hitters ago in 1994, when Scott Erickson of the 8-14 (.364) Minnesota Twins blanked the Milwaukee Brewers. Here are all the no-hitters thrown by losing teams since 1998, with the W-L record following the feat.

Moving on to his in-game performance, Jackson certainly didn't get any help in his feat from home-plate umpire Adrian Johnson. Below are the pitch charts for both EJ, on the left, and Rays starter Jeff Niemann, on the right. Think of them as snapshots, from the catcher's perspective, of all the pitches called as balls or strikes by Johnson. Balls are shown as green dots, called strikes as red ones. The square in the middle is a typical strike-zone. [Both charts were produced through the PITCH-f/x database at texasleaguers.com]

It's an interesting contrast. For Niemann, Johnson pretty much called the strike-zone by the book. I can see three pitches that "should" have been strikes but were balls, but also a couple, thrown inside to a right-hander, where Niemann got the benefit of the doubt. And then there's Jackson's chart, where the inside of the square is positively riddled with green dots - "balls" that were actually strikes. Admittedly, Jackson's pitch chart looks more like someone was enthusiastically unloading a sawn-off shotgun from the mound in the general direction of home-plate, rather than pitching methodically with care and caution.

I don't think there was anything malicious about the decisions, but it seems to prove that if you show early on that you can throw strikes, you have a much better chance of getting calls. Over the first three innings, Niemann threw 54% strikes (22 of 41 pitches), Jackson only 45% (30 of 67) during the same time-frame, before settling down, and throwing 60% strikes the rest of the way. However, by that point, the man in blue behind the plate had decided Jackson was not going to get the benefit of any doubt.

Next, let's look at Jackson's pitch-selection for the game, compared to the whole season. The chart below, again from texasleaguers.com, does that, and also shows the average speed of each kind of pitch, plus the horizontal and vertical movement (in inches). These compare a pitch's location at the front of the plate, to where physics would predict it to end up, without any spin, etc.. A negative number for the horizontal, means the pitch moves in to a right-handed batter. For the vertical figure, a positive vertical value doesn't indicate the pitch moves up, just that it drops less than a spinless pitch would -a negative number drops further (typically only the curve-ball does that).

The numbers do back up Edwin's post-game statement, "Good thing I could throw the slider for strikes at any count. That just saved me and resurrected my game."62.5% of his sliders were thrown for strikes, a far greater number than any other type of pitch, though close to his seasonal number (64.3%). The fastball? Not so much... Only 46.7% of those were strikes, well below his 2010 average, 61.6%. When Jackson realized this, it appears he switched to throwing more sliders - 38%, compared to 22% for a typical game - with the fastball, change-up and curve all being used less often than normal.

Looking at the movement.numbers, we see his fastball was slightly flatter and hardly moved at all compared to what it usually does. On the other hand, while his slider dropped about the normal distance, it had almost three times as much horizontal life. It's impressive that Jackson was able to harness this, and still throw the pitch to get strikes. Finally, while I do note that his average velocity was down a couple of miles per hour on almost all of his pitches, this doesn't seem to have been a function of fatigue - perhaps the heavy, sea-level air was responsible instead? But let's look at how Jackson's pitch speed over the course of the no-hitter [from brooksbaseball.net] 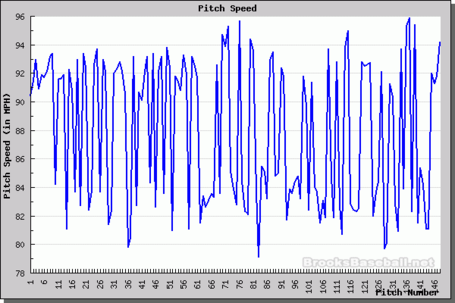 This shows a remarkable consistency of speed over the performance, with little or no discernible drop-off in speed, as Jackson threw the most pitches by any major-league starter in almost five years. He seemed to be particularly feeling his oats in the fourth inning, after escaping the bases-loaded jam in the third, and then again down the final stretch. This does tend to support the theory that any arbitrary limit on pitches e.g. 110, is not because a pitcher can't be effective for longer. But that's a topic which merits a whole article of its own, and I'll be covering the subject of pitcher "abuse," hopefully tomorrow.