It seemed very, very unlikely, after he walked seven Rays while having retired only six batters. But Edwin Jackson delivered a truly heroic marathon effort, and one of the toughest performances in recent baseball seasons. Jackson threw a total of 149 pitches, allowing eight walks and a hit-batter, in completing the second no-hitter in Arizona history, following on from Randy Johnson's perfect game against Atlanta in 2004. It was also the eleventh anniversary, to the day, of the first ever no-hitter in which the team were involved, when Jose Jimenez no-hit the team in 1999.

Adam LaRoche scored the game's only run, a solo home-run in the second, to give the Diamondbacks victory. Details after the jump

The ongoing series of bizarre contests involving Arizona continued today. For the first two-plus innings, it was as if Dontrelle Willis had mugged Edwin, and taken his jersey - because he couldn't find the strike zone with both hands. He walked two in the first, two in the second and then walked the first three batters he faced in the third, to load the bases. Of the first fifteen pitches he threw to the plate in the third inning, Jackson had exactly three strikes, and the bases were full of Rays without an out being recorded. But a fly ball to right was too shallow to challenge the JUpzooka, and a ground-ball to Reynolds got the second out on a force at the plate. Another groundball ended the threat, and the Rays only had two at-bats with RISP the rest of the way.

Having somehow managed to escape the jam unscathed, and it was as if someone had flipped a switch. For Jackson then retired 21 of the next 24 batters faced, allowing only an error, another walk and a hit batter - but zero hits. He seemed to get stronger as the game went on, and was helped out by the Rays taking some quick hacks at his pitches. "We stopped counting at 115," said manager AJ Hinch after the game, referring to Jackson's pitch-count. It was already approaching 70 after the first three innings, and I think we all would have considered it a good outing at that point, if he'd managed to go five innings. Little did we know...

There was some solid defense behind him, but perhaps the closest that Tampa came to ending the no-hitter was a squibber off the end of the bat to open the seventh inning. It looked like it was going to die on the infield grass, but - aided by some severe body English from Miguel Montero - it eventually span back foul. Mark Reynolds also made a couple of very nice plays on the infield, but if any of those had been the deciding factor in turning this into a one-hitter, it would have been a very cheap shot instead.

Edwin threw a total of 149 pitches, tying the franchise record set by Randy Johnson in Montreal in July 2002. Only one pitcher since 2002 has thrown that many in a game - the famously rubber-armed Livan Hernandez, who had 150 for Washington against Florida, in June 2005. It's worth pointing out that only two other active hurlers have ever thrown that many in a game: Hernandez, and knuckleballer Tim Wakefield have both had three such outings in their career - Wakefield topped out at an amazing 169 pitches in June 1997. Though obviously, those are not quite as high-impact as Jackson's were - his first pitch to Hank Blalock, the penultimate out of the game, still hit 96 mph.

Only one no-hitter has involved the pitcher facing more opposing batters than the 37 who saw Jackson today. In August 1965, Jim Maloney saw forty hitters, as he pitched ten innings for Cincinnati against the Cubs - Maloney walked ten, in addition to the thirty outs recorded. Here are all the five no-hitters in which eight or more walks were recorded.

Some other factoids about Jackson's no-hitter. He threw 79 strikes and 70 balls - the latter appears to be a record for a modern-era no-hitter, passing the 64 thrown by AJ Burnett [though it's not clear how many balls and strikes Maloney threw, as things like that were not part of the permanent record back in the dawn of history]. There were ten ground-ball outs, eight fly-ball outs, eight strikeouts, and a crucial caught stealing, when Montero gunned down the speedy Carl Crawford to end the eighth frame, and save Edgar from some precious pitches. Mind you, as the batter only reached first after Stephen Drew booted the ball badly, it served justice admirably.

It's the third no-hitter thrown against the Rays in the past year, following those of Dallas Braden in May, and Mark Buehrle's last July. It's also the fourth no-hitter of 2010 (after Braden, Roy Halladay's perfecto and Ubaldo Jimenez), and we're not even at the half-way point. It's already the most in a single year since 1991, when there were five - though it has some way to go to catch 1990 which saw no less than eight [seven "official" no-hitters, plus Melido Perez who had six no-hit frames in a shortened game]. It's somewhat ironic that the event happened one year to the day after Michael Jackson passed away. There are a lot of confused people on Twitter right now, shall we say...

I guess I should mention the other side of the coin: the offense did just enough to win, literally. The tension was ramped up with it being a 1-0 win, which puts it into an even more exclusive club - tonight's game was the fourth no-hit, 1-0 game since 1988. We were always wondering whether Hinch might put the game victory ahead of the no-hitter, especially as Jackson's pitch-count went into previously-uncharted territory: his previous career high was 132 pitches. The bullpen was kept very warm from the seventh inning on, and it was clear that one hit and Edwin's day would be over.

The Diamondbacks only had three at-bats with RISP in the entire game - in other words, as many as the Rays had in the third inning alone. Two of those came in the sixth inning, after three successive hits had loaded the bases for us, with no-one out. But Montero went down swinging and Chris Young grounded into a double-play. The result was that all Arizona had to cling on to was LaRoche's eleventh home-run of the season. That came with one out in the second, when he drove a  2-0 fastball over the fence in right. Kelly Johson and Justin Upton each had two hits and walk, as the team won when scoring less than five runs, for only the fourth time in 37 attempts this season. 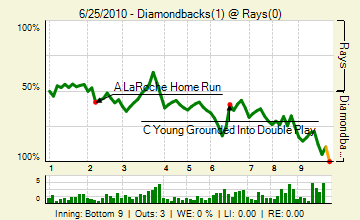 Some credible contenders for Comment of the Night. The most rec'd was a truly-appalling typo by justin1985, which I cannot possibly reprint here. Therefore, let's give it to friendly visiting tro...er, fan, victor frankenstein, who behaved impeccably with regard to not mentioning the no-hitter in progress, and was unimpressed by the commentators' lack of restraint in this area:

Hearing their casual multimentioning that...event...just sounds like a couple of guys playing catch with a Ming vase.

Well, I had all manner of other stuff queued up for the recap, including a list of the 20 players who had appeared for both Tampa Bay and Arizona, but for obvious reasons, that can wait until tomorrow. Congratulations are due to Edwin Jackson for an amazing performance. Let's see if that will galvanize this team into a long streak of wins.