Arizona headed into tonight's series finale with the chance to take two of three from The New York Yankees, silencing half the patrons in attendance and getting some much-needed momentum. What happened instead was equal parts dramatic and awful. Timely hitting in some spots, and failure in others. Good bullpen work some innings, and crippling blows in others.

Follow me after the jump, and I'll tell you a story: The Adventure of Lord Dontrelle, and The Team That Rallied Behind Him But Wasn't Good Enough Anyway.

Willis threw 27 pitches in the first, and only eight of them were strikes. But the Yankees did their best to bail him out, running their way out of the inning entirely. Jeter walked and moved to second on a wild pitch, and scored on a base hit by Swisher. And then Swisher was caught stealing without even involving the catcher. Then Teixeira and Rodriguez drew back-to-back walks to put a runner back in scoring position -- and that threat was promptly erased when Cano struck out and Teixeira was caught trying to go to third (with two outs, so who knows). You know, your run-of-the-mill one-run inning.

The Diamondbacks struck back quickly, however...and destroyed themselves on the bases just the same. The inning started walk-single-single-walk, yet no runs scored. For after Johnson's walk and Drew's single, Upton laced a base hit to opposite field, but Johnson was gunned down at home. Montero walked to reload the bases, but Young struck out for the second out. LaRoche followed with a clutch two-out hit, though, scoring Drew and Upton...only to see Montero gunned out at third to end the inning. Again, why a runner was trying to head to third with two outs is beyond me. Still, the Diamondbacks found themselves up 2-1 after a run-of-the-mill two-run inning.

Both sides went down in order in the second, returning to normal a bit. Willis once again helped the Yankees in the third, however, walking FOUR batters, including a leadoff base on balls to the pitcher. Once the tying run waltzed home, Willis was pulled with the following wonderful line:

His ERA remained below 5 for the season, despite a WHIP north of 2. In all, Willis threw 67 pitches to get seven outs, and only 27 were for strikes. Just...awful.

Somehow, baseball continued from that point. Boyer relieved Willis and promptly got Cano to ground into an inning-ending double play, preventing further damage with the bases loaded. In fact, Boyer provided solid (if shaky) relief all the way through the fifth, keeping the Yankees stuck at two runs.

Meanwhile, Arizona retook the lead in the fourth thanks to another quick offensive outburst. Montero and Young started the inning with a base hit and a double respectively, and LaRoche drove both of them in with another base hit. The D-backs could get nothing further, but they still found themselves with a 4-2 lead.

Boyer gave it all back in the sixth, though, seemingly left in too long (42 pitches by the time he was pulled). He was in trouble from the start, with a leadoff double followed by a single and stolen base by Granderson. Boyer was unable to wriggle his way out of the jam, giving up an RBI groundout and another run via a single before finally being yanked, the lead vanished. New guy Demel promptly bailed out his compadre with another double play ball, though, so once again Arizona found itself tied.

Like the last time, the Diamondbacks retook the lead -- but this time it was the Yankees giving out gifts. With one out, Chris Young drew a walk. He proceeded to move to second on a balk, to third on a wild pitch, and score on a LaRoche (sound familiar?) groundout in a display of National League run generation at its finest. Or worst, depending on your perspective.

You thought maybe, just maybe, that margin could hold. But this bullpen seems determined not to let the Diamondbacks win under any circumstances. In this case, Demel continued through the seventh with another great inning, striking out the Yankees' 2-3-4 hitters in a dominant performance. And even Juan Gutierrez joined in on the fun, striking out the side in the eighth (albeit while dancing around two hits and giving everyone heart attacks).

Newish closer Aaron Heilman was tasked with protecting a one-run lead against the top of New York's order. No easy task, to be sure, but one you expect to be done. Instead, he promptly walked the first two hitters he saw, and the stat about leadoff walks coming around to score unless they don't came true -- Teixeira moved them over with a groundout to the right side, and A-Rod launched a sac fly to end the dream of an Arizona player getting a clean save. Heilman did escape without allowing the go-ahead run to score from second, but the damage was already done, and our closer had blown a save without even given up a hit.

Arizona could manage nothing off Mariano Rivera in the bottom of the ninth, so the game went to extra innings. Carlos Rosa took over in the 10th, and gave up a big fly to the first hitter he faced (Granderson). It seemed like the damage would be even worse, as the next two hitters reached on a base hit and a walk, but Rosa extricated himself from danger with a GIDP. With two outs, the Yankees let Rivera hit for himself (19 pitches in the ninth) -- which seemed odd with a one-run lead. Rivera had two previous big league at-bats: a strikeout in 2006, and a bases-loaded RBI walk last year. This time around, Rivera ended the inning with a feeble groundout, and we headed to the bottom of the 10th.

Did the Diamondbacks make the Yankees pay for their arrogant use of Rivera? Make a statement, turn around a dreary season? They sure seemed on their way. Drew started things off by roping a little base hit to right. Upton followed it up by pulling a double to left, but it was iffy whether Drew could make it home on Gardner's arm. At the very least, second and third with no one out wasn't a bad fallback position. Montero was intentionally walked to load the bases, and then the following sequence of fail happened:

- Young popped out to the catcher on a pitch that might as well have been at his eyes.
- LaRoche popped out to third on a cutter that bore in on his hands (and if anyone has the inclination to mention anything about "warming" in relation to this, do bear in mind that he drove in all five of our runs tonight).
- Reynolds struck out on the fifth of five fastballs away.

Punch in the gut. Enough offense, a decent outing by the bullpen -- but none of it at the right times, weighed down too heavily by an abysmal outing from tonight's starter. 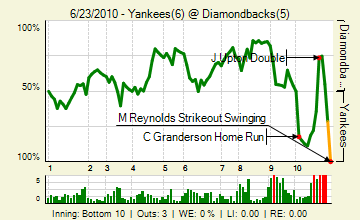 So there you have it. Plenty of blame to go around, and to be honest, a feeble effort like tonight's probably shouldn't beat the New York Yankees anyway.

Next up: A day off to regroup, followed by a three-game set with Tampa Bay as we end this part of a murderous interleague schedule. Early starts since they're on the road -- 4:10, 1:05 and a 10:40 early riser on Sunday. Hey, don't look so glum -- the Rays are only the third best team in their division! Ha, ha, ha...

EDIT: Forgot a Comment of the Night. So, with a little further ado, here it is!

Did anybody else see Willis hitting his own leg?

That’s him punishing himself for throwing a ball into the strikezone.