Share All sharing options for: Yankees 9, Diamondbacks 3 - Bullpen Yanked Around In Losing Effort

Last night's game between the New York Yankees and Arizona Diamondbacks brought great hope to the fans of the boys in red. Arizona's offense had jumped on AJ Burnett early, and the bullpen nailed down a win. Could the REAL Diamondbacks be appearing against the reigning World Champs?

If you guessed "No way," you would be correct. In fact, let's be thankful that ESPN decided to air last night's game and not tonight's. The Yankees and Diamondbacks both scored a few runs early and both starters settled down through the middle innings, but then one team's bullpen coughed up 6 runs and put this game out of reach. Who's bullpen, you may ask? I'll give you one guess...

Dan Haren was coming off a bad start in Boston, but his career numbers against the Yankees are respectable - 4-0 with a sub-4 ERA. Sadly, Haren's numbers in the first inning of ballgames this year are not so pretty - 11 runs and 5 home runs - and those were the numbers that got worse tonight. Derek Jeter singled to lead off the game, and with two outs, Alex Rodriguez hit a home run to left to give the Yankees a two run lead. The Diamondbacks would fight back with two runs of their own in the 2nd inning. Two walks around a very close double by Mark Reynolds (who slid around the attempted tag by Robinson Cano) loaded the bases for Dan Haren. Haren said "I don't need no stinkin' DH" and bounced a single past first base to score Adam LaRoche and Reynolds and tie the game at two all. Unfortunately, the Yankees had some two-out magic of their own in the 3rd inning. After getting Pettitte and Jeter out, Nick Swisher and Mark Texiera singled, and A-Rod then scored Swisher with a hit of his own.

After that, the teams exchanged four scoreless innings. Both Pettitte and Haren singled in their halves of the 5th inning, but both were stranded; Justin Upton led off the 6th with a single but stayed at first base; and Brett Gardner walked in the 7th but was out on an inning-ending strike-em-out, throw-em-out double play throw from Snyder.

With one out, the bases empty, and Haren at 109 pitches in the bottom of the 7th inning, AJ Hinch pinch hit Rusty Ryal for Dan Haren, who was 2 for 2 against Pettitte. I understand pitch count, but at least leave him in there to hit for himself! But no, Ryal flew out to left, and Haren was surely thinking, "Gee coach, I could've done that." So with Haren out of the ballgame, in came..... the bullpen. The first incarnation of evil came in the form of Esmerling Vasquez. Though he has been decent of late, he struggled mightily tonight. Vasquez gave up three singles, a double, and a walk (5 batters, 0 outs) before Hinch replaced him with the second incarnation of evil, Chad Qualls. Cue the Qualls Inherited Runners Diagram (thanks, hotclaws). Eventually, all 5 of Vasquez's runners would score, and Qualls added an earned run of his own for a total of 6 runs in the 8th inning. ASU alumni and Yankee rookie Colin Curtis got his first major league hit and 2 RBIs as the Yankees batted around in the inning.

The game that Dan Haren had left with a 1-run deficit had become a 7-run deficit which was too much to overcome. Kelly Johnson doubled in Chris Snyder in the 9th, but that only made the final score 9 to 3. So Round Two ended in favor of the Evil Empire, but as unnamedDbacksFan said, "The Empire Strikes Back with a vengeance! But we know how the trilogy ended, don't we?" Better luck tomorrow, boys. 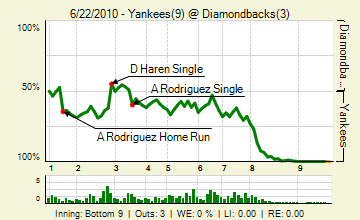 It was a fairly quiet gameday thread, which was to be expected with Jim hitting the sack early and Phil and Katie (and probably a few others) at the game tonight. When *I* ran roll call, we had just hit 800 comments. Jdub beat out justin 213 to 183 and Aaron was 100 comments behind in third place. (Hey, third isn't bad, if I do say so myself.) All present were: justin1985, Jdub220, CaptainCanuck, Clefo, Jim McLennan, snakecharmer, unnamedDBacksfan, luckycc, Aaron622, hotclaws, asteroid, kishi, BattleMoses, AJforAZ, Wimb, blank_38, Turambar, piratedan7, Counsellmember, Bryan J. Boltik, and Azreous.

Comment of the night goes to AJ, who probably would've gotten even more than 2 recs had he not shamelessly campaigned for himself. The only other one was the Vuvuzela Hero picture, which, while cool, does not warrant CotN status.

when Danny got up with bases loaded

I smiled. Who thought I’d be so happy to see the pitcher bat. NATIONAL LEAGUE FTW!!!!!

The mini-homestand ends tomorrow night, then the Diamondbacks head all the way back to the east coast to take on the Rays. Time to dig deep and win a homestand.