When Are The Diamondbacks Losing Their Games?

Share All sharing options for: When Are The Diamondbacks Losing Their Games?

The struggles of the Arizona bullpen have been well documented, and painfully obvious. Even with a recent improvement in their performance, our relief corps still have a horrific collective ERA of 7.15. The Brewers are the only other team above five, and even they are 1.4 runs below us. To get the Diamondbacks number down to the point where we are merely the twenty-ninth worst in the majors, the bullpen would need to pitch 44.1 consecutive scoreless innings. They've not just been very bad, they've been very bad for a very long time.

The question is, how many of the team's losses are the bullpen's "fault"? What might the team record be, if we had merely an average set of relievers? After the jump, we'll take a look at the numbers.

Initially, the answer may not seem all that many. Our bullpen's record is 8-16 - that's a .333 winning percentage, not all that different from the .426 posted by our starters. But that's somewhat misleading, not least because of the bullpen's struggles with inherited runners - 45% of them have scored. The Dodgers are the only other team in the NL who are only above 40%. Why is this important? Because if a starter leaves runners behind, but a reliever allows them to score, they are charged to the starter, and can lead to him getting the L, even after he has left the game.

A better measure might be to plot the Diamondbacks' path through the game, inning by inning. Is our win percentage the same after the sixth inning as it is overall? That's what the chart below shows, and I've plotted the data for all the National League West teams, as a control. For the end of each inning, it shows the percentage of games in which the team was leading at that point. The final (#10) point shows the overall mark for the team, effectively combining all extra-inning contests into one. 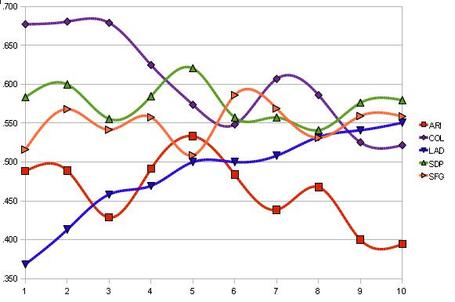 The results are startling. While, in overall record, the Diamondbacks are far and away the worst in the division, that's not the case for the first half of games. Indeed, after five innings the team has a 32-28 record, better than both the Giants and Dodgers. However, they lose almost a hundred points of W% over the sixth and seventh innings then, after a respite in the eighth, another 68 in the ninth. All told, Arizona's win percentage is 139 points worse beyond the fifth inning. The comparable numbers for the rest of the NL West are: Colorado, -52 points; Los Angeles, +51; San Diego, -41; San Francisco, +50, an average very close to zero. What does this mean? Bold letters, I think...

If the Diamondbacks had simply played .500 ball from the sixth inning on. gaining as many leads as the lost, they would be a 38-33 team, two games back in the wild-card race.

A couple of other teams also show some interesting behavior. The Dodgers seem to get out of the gate particularly slowly: they are 14-24 after the first. But their win percentage improves just about constantly thereafter. Conversely, after three innings, the Rockies dominate. They are 36-17, extrapolating to 47-22, which would easily the best record in the majors. However, they hemorrhage wins the rest of the way: only three times this year have Colorado gone from behind to ahead in the course of a single inning, something even the woeful D-backs have managed on nine occasions.  It doesn't help the Rockies have scored just five ninth-inning runs all year.

But to go back to the Diamondbacks, this seems to back up what we've known all along, that it's the late innings which have plagued Arizona. But does our offense perhaps simply go to sleep or is it the pitching which falls apart? Seems to be a bit of both. Here are the average numbers for runs scored and allowed by us in each inning so far:

The overall average is .54 and .65 respectively. But the offense scores less and the pitching conceded more than that, each regulation inning from the sixth on. That said, the ninth has simply been horrible for our hurlers: overall, it's normally the frame in which virtually the least runs are scored - but not for Arizona, who concede them at a rate comfortably more than double the major-league average.

"Big innings" seem to be a particular problem. 25 times in 2010, our pitching staff have allowed four or more runs in a frame. Almost half of these - 12 - have come in the seventh or later, which will usually either blow a lead or end any hope of a comeback. In contrast, the offense has delivered only three such innings over the final third. This is partly why I was probably not the only fan who felt somewhat nervous last night, even though we went into the ninth with a seven-run advantage.

On the plus side, that does mean that fixing the problem is relatively simple - sort out the bullpen. The hitters and starting pitching, while not perfect, are just nowhere near as much of a problem. The offense has a total OPS+ of 106, with LF the only position below average. Our rotation has an ERA of 4.75, which is within a respectable difference of the NL mean (4.10), by the time you take park factors into account - and of late, it has been even better than that, with a June ERA for the rotation of 3.85.

Chad Qualls may not be fixable - I'm increasingly convinced his knee injury may have broken him irreparably, BABIP or no BABIP. But as noted before, if we can get the other tools functioning at the level of which they are capable, then this team should start to play a great deal better, even if nothing else changes

[All statistics exclude tonight's game - in which there was another big inning for the opposition late, courtesy of the bullpen...]