Mystique and Aura's plane must have been diverted to Albequerque on route to Arizona, because the feeble Diamondbacks more or less dominated the reigning World Series champions this evening, hammering AJ Burnett in a manner reminiscent of the BOB Bombers of our golden era. Justin Upton homered twice, driving in four runs, Adam LaRoche had three RBI, while Miguel Montero and Gerardo Parra each had a trio of hits. Meanwhile, Rodrigo Lopez pitched eight strong frames, limiting a tough Yankees line-up, and picking up his third win.

Kinda hard to tell which team had the $210 million payroll tonight. Details after the jump.

Scoring five runs in the first inning of a series against the defending World Series champions, who also currently have the best record in baseball, is certainly a good way to make a statement. And that's exactly what the Diamondbacks did, using the long-ball to wreck AJ Burnett's evening before it really got under way. All the damage was done with two men out: Upton got things under way with a solo shot to the porch in right center. After singles by Miguel Montero and Chris Young, Adam LaRoche and Mark Reynolds want back-to-back, to give Arizona a thoroughly unexpected five-run lead after the opening frame. Memories of 2001's Game Six danced in our heads.

Montero doubled home another run in the next inning, although the Yankees got in the board in the third - and rarely have I heard such a loud cheer for closing the gap to five runs. The lead was then extended back to six in the fourth as Montero got his third hit of the night, driving in Upton to score his third tally of the evening. A pretty scary moment in the sixth, when Upton got drilled right on the end of the elbow - you could hear the crack all the way up in the press-box, and Upton went down, and stayed down for quite some time. Fortunately, after the trainer and Hinch came out, our right-fielder seemed to be ok, and went down to first-base.

Actually, if subsequent results are anything to go by, "ok" is an understatement, and he should get plunked on the elbow every game, and twice on Sundays. Because, when he came up in the eighth with two men on, he cranked his second home-run of the night about ten rows deep, into the left-field bleachers, to give Arizona a 10-3 lead. Those ten runs were the most ever by the Diamondbacks against the Yankees in a regular season game, surpassing the nine we scored in New York when we played them there in June 2002. Of course, it was still a little short of Game Six, but we'll happily take them.

Meanwhile, Rodrigo Lopez was showing once again what a valuable back of the rotation pick-up he has been. He does not have the greatest "stuff" in the world, but he was using all his arsenal, changing location and velocity to keep the Yankees largely off-balance. It seemed like every ball hit was in the air: 17 of the 24 batters he retired were on fly-balls. but very few of them were more than deep pop-ups - Chris Young showed good range on a ball or two, and Gerardo Parra took a route best described as "interesting" to a ball hit to left-center in the eighth, but it found his glove, and Lopez exited after 103 pitches, having allowed three runs on eight hits and two walks. A great outing.

All that was missing was Byung-Hyun Kim coming in to pitch the ninth. Instead, we got Carlos Rosa, who did allow a run on a hit and a walk, and didn't exactly look like he will be seeing high-leverage innings anytime soon. Still, absolutely no damage done, It was the first time we reached double-digit runs in more than a month, since we beat the Giants 13-1 on May 19. Upton led the way, reaching base safely all five times he was up, on three hits, a walk and the HBP. Parra and Montero also had three hits, and Reynolds had a couple of walks in addition to his team-leading seventeenth HR of the season.

Over 47,000 at Chase, so slightly short of a sellout. Even though a lot of them were Yankees fans, It was still nice to see an energized ballpark, and the visiting supporters had a lot of gas removed from their windbags by that first inning. I think it was a great piece of psychology to have the first pitch thrown out by three of the heroes of 2001 - as I noted in the FSAZ chat, we should put "Randy Johnson" as our starter tomorrow, just to screw with them some more... The home team has got to be looking to take the series tomorrow, with their ace Dan Haren on the mound. We're facing the man whom we absolutely plundered in 2001, Andy Pettitte. Hopefully, he is still tipping his pitches. 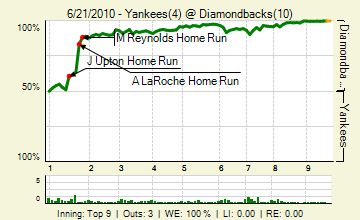 Roll-call and comment of the night to follow from home, but I think they want me out of the press-box. :-)

Ok, home now, and leafing through the 1,500+ comments - a lot of them rather closer to the margin than I would have wanted [Didn't 'charmer, She-Wolf of the Margin, say she'd be about tonight? It seemed to be soco plowing a lone furrow against the endless waves of barbarian commenters]. By the time I filter out the Pokemonchat, theoretical physicschat and techgadgetchat, it's almost tomorrow. But Comment of the Night goes to a beautiful piece of shot-callage by Bryan J. Boltik, just before Reynolds' home-run:

Sheriff will hit it out

Thanks also to everyone who showed up for the Fox Sports Arizona chat, which was again a lot of fun. Good to see us covering standard SnakePit topics, such as Star Trek and vuvuzelas. Our mission of infiltration, subversion and eventual takeover, continues apace, bwah-hah-hah - much to the disdain of D-hacks, who seemed to think we should be offering play-by-play, for a game most people were already watching. Still, as the team is 2-0 when I'm present in the press box, and 28-41 when I'm not, I think a return trip will be in the future.

Now, let's win the series tomorrow, and we can then turn the ball over to Dontrelle Willis and not care too much what happens there!