Diamondbacks 1, Tigers 3: War of the Words

Share All sharing options for: Diamondbacks 1, Tigers 3: War of the Words

Ian Kennedy had been almost impeccable through six innings, allowing only two hits and shutting the Tigers offense out, DH or no DH. But it all turned around in the space of four pitches during the seventh: back-to-back homers turned a 1-0 lead into a 3-1 deficit, and the Diamondbacks ended up losing by that score, with the W going to former Arizona pitcher Max Scherzer. We were hoping for a little reputation redemption in the ninth, with Miguel Montero facing Jose Valverde - as we'll see, the two had exchanged harsh comments - but all we got was a Montero ground-out. So the road-trip ends, not with a bang, but a 1-5 whimper, and it's back to Phoenix to face the MFY's.

It initially looked quite promising for the DIamondbacks, as Max Scherzer struggled massively to get through the first inning. He only allowed one run, on an RBI double by Chris Young down the left-field line - about a yard higher and it'd have been a three-run homer. But it took 36 pitches for him to retire three Arizona batters, and we all nodded our head sagely, thinking how wise we were to have traded someone who clearly still can't pitch deep into games. But the joke was on us, as Scherzer ended up pitching six more frames, all of them zeroes, and it only took him 82 additional pitches to do so. The Diamondbacks made 15 consecutive outs to end the game.

Max, Joel Zumaya and Valverde faced only five batters over the minimum, and it was the Diamondbacks 28th game with double-digit strikeouts this season. That's far and away the most in the majors: the Rays are on 22, and the Marlins are the only NL outfit to have even reached twenty. The Mark Reynolds we saw yesterday appeared to have evaporated: he went 0-for-3 with a trio of strikeouts. We'll get into looking more at him on Thursday's off-day, as he'll be the subject of What's Up With...? Adam LaRoche was also hitless with a pair of strikeouts: he seems to go down swinging at strike threes that are out of the zone an awful lot, but I haven't found any numbers to confirm this.

Rusty Ryal had a couple of hits, starting at 1B: one wonders if he may be a replacement for LaRoche if traded. Chris Young was the only other Arizona batter to reach safely more than once. As noted above, he drove in our only score of the day, added a walk, and stole a base so easily that he was basically standing on second before the ball had even reached the batter's box. The steal makes him the first member in the NL of the 12-12 club, as Young has a dozen of both home-runs and stolen-bases: the only other player in the majors to have done that to date, is the surprising Alexis Rios of the White Sox, who has thirteen homers and 20 SB.

The sole other true bright-spot of the day was another quality start by Ian Kennedy, who would have retired fifteen straight Tigers of his own up until the end of the sixth, save for Tony Abreu's inexplicable failure to snag a firmly-struck, but perfectly catchable, liner in the second inning. Kennedy's pitch-count was perfectly manageable, so this wasn't one of the cases where AJ Hinch left his starter in too long because he feared the bullpen. He just seemed to lose the ability to retire batters, as they went 4-for-6 with two home-runs against him before he was relieved. Kennedy's final line: three runs on six hits, with no walks and five strikeouts, over 6.2 innings.

Juan Gutierrez came in to get the final out of the seventh with a man on, and allowed a hit, then retired the next four batters faced. Little steps, I know, but that's now been 4.1 scoreless innings for Gutierrez, with five hits allowed and no walks. That's the longest series of scoreless frames for him all year, surpassing the four scoreless at the start of the year. That's part of the reason the bullpen ERA has been a good bit better this month. Ok, we're still talking a pretty crap 5.36, but there's been worse out there in the NL - the Phillies, Marlins and possibly Astros, depending on how their game today goes. Like I said: little steps. Compared to April (6.85 ERA) and May (8.56), we'll take it.

Time to talk about the Montero-Valverde thing. Nick Piecoro has all the juicy details, which started after Montero expressed displeasure at the post-save antics of the Tigers' closer. "Tell Montero he’s a freaking rookie and I can do whatever I want to... I never liked Montero. He’s a _______ piece of ____." Our catcher shot back: "In four out of six years he’s given up 100 runs a year. He’s only had two good years in his career. So what? He’s still a ____ to me.... What do you want me to say? He’s smart? No. He’s just dumb." Valverde also discussed the D-backs, saying: "I don’t know what’s going on with that team, but what I see is that everybody is separate."

That kinda added a spark to the ninth inning, where Montero was up second to face Valverde, and after Justin Upton made the first out, we all speculated on whether a fastball to the ribs was coming. However, there wasn't even a high and tight pitch, and as Montero jogged down the line after grounding to the first-baseman, neither man seemed interested in making any eye-contact. Indeed, after Valverde got the final out to end the game, he seemed a bit more subdued that previously. Since we won't see the Tigers again this season, that's probably the end of it. 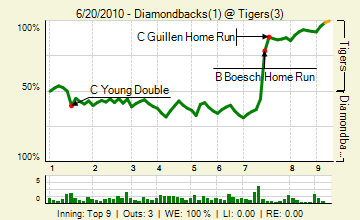 A lightly-trafficked Gameday Thread, with most people probably busy with their Dads - which reminds me, have to phone Scotland when I post this. Jdub220 continued his recent streak of activity, just pipping Rockkstarr12, pygalgia and DbacksSkins, with only half-a-dozen comments covering those four. Also taking part: Jim McLennan, hotclaws, unnamedDBacksfan, katers, emilylovesthedbacks, Clefo, kishi, DBacksUA and BattleMoses. Comment of the Day goes to Jdub220, who responded to Battlemoses's post on Montero, "I'm sure he read Chris Snyder's handbook on how to Kick a Major League pitchers ass," with

Hopefully he also read Snyder's
handbook on How Not to Get Your Testicle Smashed Harder Than Yusmeiro Petit.

Back home for the Diamondbacks, to take on the MFY in a brief three-game set at Chase Field. Surprisingly, I have not permanently been barred from the Chase Field press-box for whooping it up at Gerardo Parra's inside-the-park home-run, and have been invited back for another webchat at FoxSportsArizona.com tomorrow night. Hope to see a few of you there. SnakeBytes will be up a little later, and come back around 8pm for another piece on what 2011 might be like for the Diamondbacks.